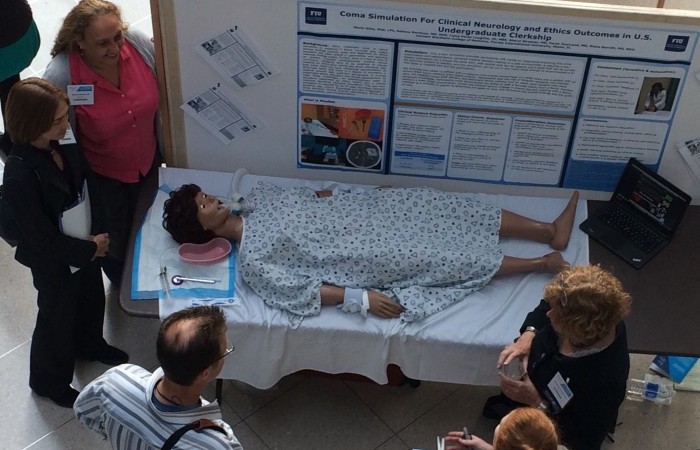 It all started with a broken mannequin and an idea for how to get students to improve their written coma examination reports. The resulting simulation exercise developed by faculty at the Herbert Wertheim College of Medicine (HWCOM) has already won an award at an international congress on clinical ethics, and this week will be presented at the VII International Symposium on Brain Death and Disorders of Consciousness in Havana.

“It’s an educational simulation that we do for our third year students where they have to determine whether the patient is brain dead, while also dealing with the patient’s family member,” said Professor Marin Gillis, a bioethicist who heads the Division of Ethics, Humanities and the Arts in the Department of Medicine, Family Medicine and Community Health.

The brain death simulation is the brainchild of Diana Barratt, M.D, M.P.H., director of HWCOM’s Neurosciences Course and Neurology Clerkship. Barratt came up with the idea after noticing some of her best students were turning in clinical histories on comatose patients that lacked details. She had a hunch they weren’t being thorough enough in their coma examinations because they weren’t sure how to handle comatose patients.

“I felt they weren’t sure how much pressure to apply to elicit a response without causing them pain or injury,” she says.

She designed the simulation using an old mannequin as the patient, and prepared scripts that play out different scenarios. Students get immediate feedback on their clinical and communication skills as well as their professionalism in handling the situation.

“This training is very important because when the students start their neurology rotations in hospitals, it’s very likely they will run into a coma patient,” Barratt says. “They have to be prepared to examine patients in various stages of dying.”

But students must not only concern themselves with the patient. The simulation also is designed to allow students to role play with the patient’s next of kin – concerned loved ones who can be anxious, angry, grief-stricken.

“The students are tested on whether they are doing the right tests to determine if the patient meets brain death criteria, but they are also assessed on whether their communication with the family member is accurate, respectful and humanistic,” Gillis says.

“And yet it’s interesting,” Gillis says. “Sometimes the student will go ‘oh, it’s good, no she’s not brain dead,’ like if that’s a good thing. But it’s not a good thing. It’s just not brain death. They have to be taught to be measured in their response.”

Students also must learn to think fast on their feet.

“In another scenario, we flatline the patient and ask the student ‘do you revive him?’ because if he’s brain dead you don’t,” Gillis says. “The patient has already passed away.”