It’s a frustrating fact that most people would live longer if only they could make small changes: stop smoking, eat better, exercise more, practice safe sex. Health messaging is one important way to change behavior on a large scale, but while a successful campaign can improve millions of lives, a failed one can be an enormous waste of resources.

So Falk and her team take a different approach: They look inside people’s brains.

In a study soon to be published in the journal Social Cognitive and Affective Neuroscience, the researchers found that brain activity in just 50 smokers in Michigan was able to predict the outcome of an anti-smoking email campaign sent to 800,000 smokers in New York State.

In collaboration with the University of Michigan Center for Health Communications Research and Research Center for Group Dynamics, the researchers recorded 50 smokers’ brain activity using functional magnetic resonance imaging (fMRI) as each smoker viewed 40 anti-smoking images, one by one.

In particular, Falk’s team focused on the medial prefrontal cortex (MPFC), an area of the brain that helps us decide what information is relevant and valuable to us.

The researchers predicted that the more activity an image stimulated in the brain’s MPFC, the more motivating and self-relevant that image would be to make that person stop smoking.

These same 40 images were then used in an email campaign sent to 800,000 smokers by the New York State Smokers Quitline. The email to each smoker contained one of the images randomly assigned, along with the identical message: “Quit smoking. Start Living.” It also provided a link where smokers could get free help to quit.

Not all images were created equal: Among those who opened the email, click through rates varied from 10% for the least successful images to 26% for the most successful.

But interestingly, the negative anti-smoking images which elicited the most powerful brain response in the MPFC of 50 smokers in Michigan were also the most successful at getting the hundreds of thousands of New York smokers to click for help in quitting. (And research has shown that visits to a quit-smoking site correlate with the likelihood that someone actually will quit.) 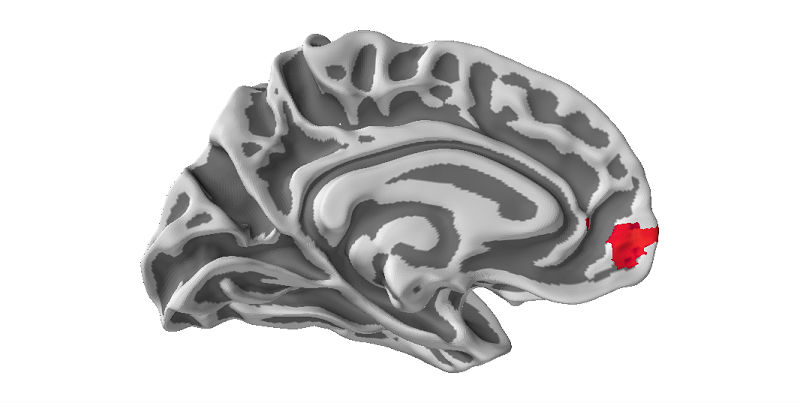 The red highlighted area depicts the brain area of interest in this study.

“By their nature, messages about the risks we take with our health — whether it be by smoking, eating poorly, or not exercising — cause people to become defensive,” says Falk. “If you can get around that defensiveness by helping people see why advice might be relevant or valuable to them, your messaging will have a more powerful effect.”

By combining the self-reported survey data — what smokers said they found effective — with the brain responses from the fMRI, the researchers found that they could more accurately predict which messages would be effective than by knowing either on its own.

Using the brain to predict the success or failure of advertising campaigns has long been a holy grail for marketers. Although some have made claims to proprietary methods for doing so, the science behind it has been opaque. This study by Falk and her colleagues is among the first to demonstrate specific brain patterns to predict the success of public health campaigns.

Examples of three of the images used as part of the New York State Quitline campaign.

“If you ask people what they plan to do or how they feel about a message, you one set of answers,” says Falk. “Often the brain gives a different set of answers, which may help make public health campaigns more successful. My hope is that moving forward, we might be able to use what we learned from this study and from other studies to design messages that are going to help people quit smoking and make them healthier and happier in the long run.”