Microglia are cells that combat various brain diseases and injuries by swallowing foreign or disruptive objects and releasing molecules that activate repair mechanisms. Recent findings have suggested these brain cells are also active under normal conditions, where they can contribute to maturation and sculpting of neuronal circuits.

Researchers centered at the National Institute for Physiological Sciences (NIPS) have now revealed new mechanisms by which microglia sculpt neural circuits. They show that microglia directly contact neurons to induce the formation of new neuron projections that eventually will connect with other neurons and thereby increase and/or strengthen brain connectivity. These new findings could deepen understanding of how developmental disorders such as autism and schizophrenia may occur.

Early in development, neurons in the brain are particularly active in seeking out other neurons and forming connections with them. Cells called microglia, which were first identified via their protection of the brain against infection and decay, have recently also been shown to feature in brain development. 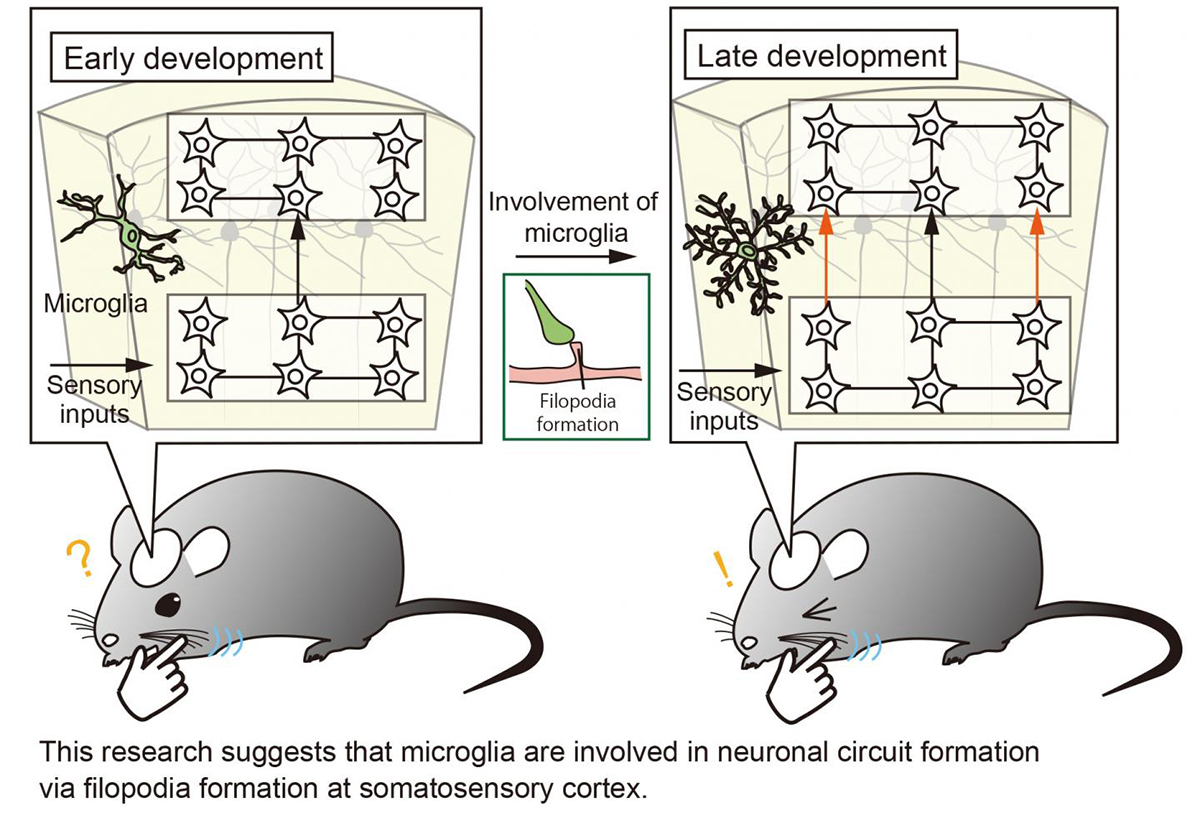 This research suggests that microglia are involved in neuronal circuit formation via filopodia formation at somatosensory cortex. (Credit: NIPS/NINS)

In a new study reported in Nature Communications, the researchers used a combination of fluorescent labeling of cells and molecules, and imaging of particular regions of developing mouse brains to clarify how microglia influence formation of neuronal circuits. They demonstrated direct contact between microglia and dendrites, which are the parts of neurons that enable them to communicate with each other. This contact induces the formation of filopodia – thin structures that project out from the dendrites – seek out the terminals of other neurons, and form synapses that enable neuronal communication.

“We were able to image microglia contacting dendrites using in vivo multiphoton imaging of layer 2/3 pyramidal neurons. To our surprise, microglia – dendrite contact caused a quite rapid appearance and growth of filopodia” lead author Akiko Miyamoto said. “We found that such contact was associated with accumulation of Ca2+ and actin, and that blocking the microglia activity led to fewer functional synapses and less specific cortical circuits.”

These findings could have important implications for a range of developmental diseases, as various studies have revealed associations between immune cells and neurodevelopmental disorders.

“We know that some brain disorders are linked to abnormal numbers of synapses or changes in their shape and function. Disruption of the immune environment in the developing brain could be linked to some disorders,” corresponding author Junichi Nabekura said. “Our new findings about how microglia influence connectivity in the brain by creating filopodia that go on to produce synapses could give us new targets in the search for treatments for these conditions.”