Nearly 12 million men in the U.S. suffer from symptoms related to benign prostatic hyperplasia (BPH), an enlargement of the prostate that can cause issues such as frequent and weak urinary streams and sleep deprivation from getting up repeatedly during the night to urinate. Since traditional BPH therapies such as daily medications and more invasive or surgical procedures often result in unwanted side effects and complications, more than 54 percent of men who would benefit from treating their BPH choose not to do anything1.

With today’s national introduction of the FDA-cleared Rezūm system, NxThera provides urologists and their patients suffering from symptomatic BPH with a new, safe and effective minimally invasive, office-based treatment option which improves quality of life and preserves sexual function2—one of the main reasons many men choose to forego medications or more invasive procedures.

“Men suffering from BPH are constantly evaluating the trade-offs between maintaining their current declined quality of life or treating their BPH symptoms and possibly incurring long term side effects,” said Dr. Kia Michel, M.D., a urologist at Comprehensive Urology in Los Angeles who recently performed the procedure as part of a nationally televised segment on prostate health. “Of all the minimally-invasive BPH treatments I’ve performed, Rezūm is the most effective and most versatile treatment available to patients—and the results have been excellent.”

“Since my Rezūm procedure, I’ve been free of having to know where the bathroom is right away; I don’t have to take pills; and I don’t have to pay for them,” said patient James Huber. “Rezūm really works beautifully and there have been no side effects. The end result has really been freedom. If you’re thinking about having the procedure, do it—it gives you freedom you never thought you would have again.” 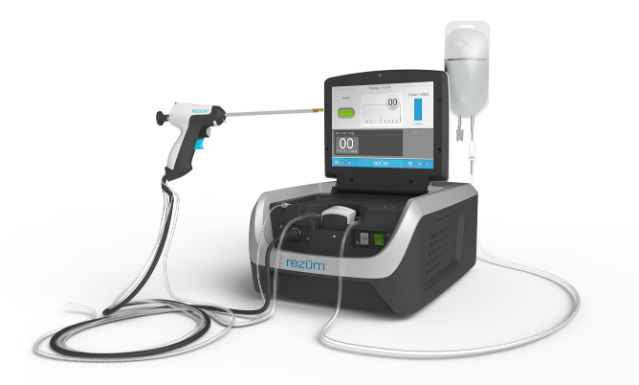 Designed to be performed by urologists in an office-based procedure, the Rezūm system uses the convective delivery of stored thermal energy in water vapor (steam) created with radiofrequency current to treat the enlarged prostate tissue that can cause the bothersome symptoms such as urinary frequency and urgency, irregular or weak urinary flow, straining during urination, and getting up frequently at night to urinate.

Rezūm can be performed using oral sedation and/or local anesthesia with minimal pain or discomfort. Published data from the Rezūm clinical studies reported clinically significant improvement in BPH symptoms within two weeks, with continued improvement out to three months, after which these symptom improvements have been consistent and durable, with no impairment of sexual function.

“The quality of life for half of all men between the ages of 51 and 60, and more than 90 percent of men over age 80, has been negatively impacted by the symptoms of BPH,” said Bob Paulson, president and CEO of NxThera. “For men who don’t want to or cannot commit to life-long medical therapies or undergoing more invasive procedures to treat their BPH, our Rezūm System offers a safe, effective and durable BPH treatment option that preserves sexual function.”

Urologists who are interested in the Rezūm system can learn more here.