A new UC San Francisco study has shown that a cancer-killing (“oncolytic”) virus currently in clinical trials may function as a cancer vaccine — in addition to killing some cancer cells directly, the virus alerts the immune system to the presence of a tumor, triggering a powerful, widespread immune response that kills cancer cells far outside the virus-infected region.

Using novel approaches to examine exactly how oncolytic viruses attack tumors, the new study — published online in early form on December 19, 2017, and in print in the February 15, 2018, issue of Cancer Research — provided surprising insights about how a viral infection can cooperate with the immune system to attack cancer cells. The study highlights an opportunity to combine this form of therapy with cancer immunotherapy drugs such as checkpoint inhibitors, which unleash the immune system’s full cancer-fighting power, the researchers say.

The idea that viruses could fight cancer goes back to the early 20th century, when doctors noted that cancer patients sometimes experienced dramatic remission after getting viral infections. Researchers have been developing oncolytic viruses since the 1980s, but following the U.S. Food and Drug Administration’s 2015 approval of Amgen’s Imlygic (T-Vec) as the first oncolytic viral therapy in the U.S., such viruses have become a closely watched area of therapeutic development.

However, researchers are still trying to understand the fundamentals of how viral therapies actually kill cancer cells, and how to optimize their effects. In different contexts, viruses appear capable of attacking tumors in a number of different ways — by directly infecting them, by releasing tumor proteins that trigger a broad immune response against the cancer, and by damaging the blood supply tumors need to survive.

SillaJen is developing an oncolytic viral therapy called Pexa-Vec, currently in phase III and phase Ib/II clinical trials for use against primary liver and colorectal cancers, respectively. Pexa-Vec is an engineered virus based on the harmless vaccinia cowpox virus — also the basis for the original smallpox vaccine. Early observations suggesting that the virus might attack cancer in part by damaging blood vessels that feed tumor growth led the SillaJen team to strike up a collaboration with McDonald, an expert in tumor vasculature, to investigate the virus’s mechanism of action in animal models.

“This got my attention in part because this virus could be given systemically by intravenous injection, in contrast to most oncolytic viruses that are injected into the tumor itself, which obviously limits their therapeutic potential against cancers that are inaccessible or have spread to multiple sites in the body,” said McDonald, who is a member of the UCSF Helen Diller Family Comprehensive Cancer Center and the Cardiovascular Research Institute at UCSF.

The Pexa-Vec virus was originally developed by Michael Mastrangelo, MD, and Edmund Lattime, PhD, of Thomas Jefferson University in Philadelphia, who engineered the harmless vaccinia virus to infect only cancer cells and other rapidly dividing cells, as well as to stimulate immune activity, in hopes of boosting the immune response to tumors.

To study how the modified virus attacks tumors, researchers in the McDonald lab injected it intravenously into mice genetically modified to develop neuroendocrine pancreatic cancer. They found that the virus failed to infect healthy organs or make the animals ill, but succeeded in infecting blood vessels within tumors. These initial infections caused the vessels to leak and expose the tumor cells to the virus. In these experiments, the virus managed to infect and destroy only a small proportion of tumor cells directly, the researchers found, but within five days of the initial infection, the rest of the tumor began to be killed by a powerful immune reaction.

“At first small spots of the tumor were infected, but then most of the tumor started to die,” McDonald said. “We were able to show that while only about five percent of cells were infected by the virus, the number of cells that were killed was more than ten times higher. As far as I know, no one has ever done this kind of analysis.”

The researchers found that by killing some tumor cells directly, the viral infection exposed tumor proteins that could be detected by the immune system, triggering an immune attack on the rest of the tumor. The researchers demonstrated this by temporarily getting rid of the immune system’s cancer-killing cells, called CD8+ or cytotoxic T cells, and showing that without these cells, the virus killed only the initial five percent of cancer cells.

McDonald’s team wondered whether they could improve the efficacy of the virus by adding in a second drug called Sutent (sunitinib) that blocks blood vessel growth and alters immune function. The combination worked, with significantly greater tumor killing than with the virus alone. When the researchers examined the tumors, they discovered that the second drug acted by making the immune system hyper-alert to tumor proteins released by the viral infection, rather than through effects on tumor blood vessels

This finding suggests that pairing Pexa-Vec’s ability to awaken the immune system to previously ignored signs of cancer with the newest generation of checkpoint inhibitors, which act by unleashing the immune system’s full force, might be an extremely potent combination therapy.

“The question with immunotherapy has always been — why doesn’t the immune system naturally detect and attack cancer cells?” McDonald said. “It seems like these viruses are like setting off a bomb that jars the immune system. The infection releases tumor antigens in a way that jump-starts the immune response.”

In an effort to further exploit the potential of Pexa-Vec to activate the immune system to fight cancer, as seen in McDonald’s preclinical data, SillaJen recently announced a new clinical trial in collaboration with New York-based Regeneron Inc. to test Pexa-Vec and REGN2810, a PD-1 checkpoint inhibitor, in combination against renal cell carcinoma, and recently signed a sponsored research agreement with UCSF to enable joint support of parallel preclinical experiments by McDonald’s team.

“The preclinical work being done by the McDonald lab has been extremely informative in helping us understand that Pexa-Vec is working like a vaccine to sensitize the immune system to attack cancer,” said James Burke, CMO of SillaJen Biotherapeutics. “Our ongoing collaboration will help us understand how best to combine Pexa-Vec with immune-modulation such as anti-PD1 antibody therapy to maximize anti-tumor immune response. If the virus is igniting a fire within the tumor, we want to see if we can use these immune modulators to pour gas on the flames.”

The research was supported in part by funding from SillaJen, Inc., the National Heart, Lung, and Blood Institute (R01 HL059157, R01 HL127402, P01HL024136) of the US National Institutes of Health, the Leducq Foundation Transatlantic Network of Excellence (11CVD03) and the Angel-Works Foundation. Seed funding was supplied by the former University of California Discovery Program, which provided matching funds for UC research sponsored by California-based biotech companies. 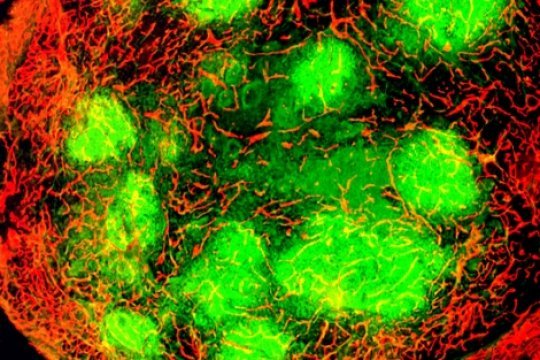