If you want to see evidence of the demand we now place on the humble battery, simply take a minute to look at your smartphone. The battery is now expected to provide a continuous, often high-discharge, power supply for components including a backlit capacitive touchscreen, front and rear cameras and LED flash, speakers, microphone, Wi-Fi antenna, graphics card, and the CPU at the core of the device. In essence, your average battery powers a device that has more computing power than the original Apollo rocket that took men to the moon.

Combined with the demand for smaller, thinner, and lighter batteries in consumer electronic devices, it shouldn’t be surprising that most phone batteries don’t last more than one day per charge. The trend for more frequent evolutionary, rather than revolutionary, hardware updates has resulted in shorter product development lifecycles (PDLCs) of one year or less in the consumer industry, something that is also beginning to affect medical device development.

The continued push to cut costs and improve efficiencies in the medical industry means that products are expected to last anywhere from ten to fifteen years to lower the total cost of ownership and increase return on investment. However, increased use of portable, wearable, and implantable devices means that the batteries need to step up, as they will be required to last for up to 25 years or more.

MedTech Challenges
Portable and wearable medical devices are often designed to include removable, rechargeable batteries making it possible to replace a battery without replacing the device. However, the same rules clearly do not apply when it comes to implantable devices, where the embedded battery cannot be replaced, meaning the entire device needs to be surgically removed and replaced.

Doctors in the British Medical Journal (BMJ) recently highlighted this problem. Cardiologists John Dean and Neil Sulke have argued that the battery life of implantable medical devices (IMDs) needs to be longer to avoid the frequency of surgery currently required and to remove the subsequent risk of infection. They have also called for IMDs to have greater accuracy when it comes to monitoring remaining battery life, and argue that devices could be made bigger to hold more charge.

Although Accutronics specializes in batteries for portable rather than implantable medical devices, these problems affect the industry across the board. Improvements in battery life, battery density, protection circuits, smart features, and sustainable design engineering are all necessary if we want to increase longevity.

A Tall Order
So what are the requirements of portable and implantable medical devices? Batteries are now expected to last anywhere between 5-25 years and be safe throughout installation and use. They must provide accurate state-of-charge information, be highly reliable with predictable discharge profiles, and use battery chemistry that is suitable for the application. They must also be able to handle high temperatures, both inside and outside the body, and we will increasingly see high volumetric and gravimetric densities being employed to deliver smaller devices with a longer battery life.

To see how we can increase longevity, it is important to get a better understanding of specific devices and their requirements. External devices such as portable ventilators, anaesthesia machines, intra-oral scanners and automated external defibrillators are designed to replace the need for mains power, so they typically use Lithium-ion (Li-ion) cells that deliver continuous high-discharge power, with batteries that need to be charged weekly, if not daily.

Our own CMX battery is designed for this purpose. The battery is available in three versions, using eight, twelve or sixteen ‘18650’ sized cells, with continuous discharge rates of up to 300W.

Smart features, like those in our CMX series, ensure delivery of core requirements. These include active and passive protection circuits that prevent over-temperature, over and under-voltage, overload and short circuit. Forming an essential part of medical device operation, smart power management means the battery only requests charge when needed and shuts down when not being used. Accurate fuel gauging is possible to within 1 percent through an LCD display, further enhancing reliability.

A Lesson in Chemistry
On the other end of the spectrum, we have implantable medical devices (IMDs) with power ratings less than one ampere, often in the milliamp and microamp range. As well as requiring batteries that can last for years without being recharged, IMDs include a range of devices, such as neurostimulators, cochlear implants, implantable cardiac defibrillators (ICDs), cardiac resynchronisation therapy (CRT) pacemakers, and drug delivery systems.

IMDs typically use lithium/iodine batteries in the microampere range, lithium/manganese oxide in the milliampere range, and silver vanadium oxide (SVO), in the one ampere range and over. The majority of these battery chemistries have been around since the early 1970s and have been refined over the years by tweaking the use of electrolyte in liquid and solid forms and by using hybrid cathode materials such as coating SVO with carbon monofluoride for higher power delivery. 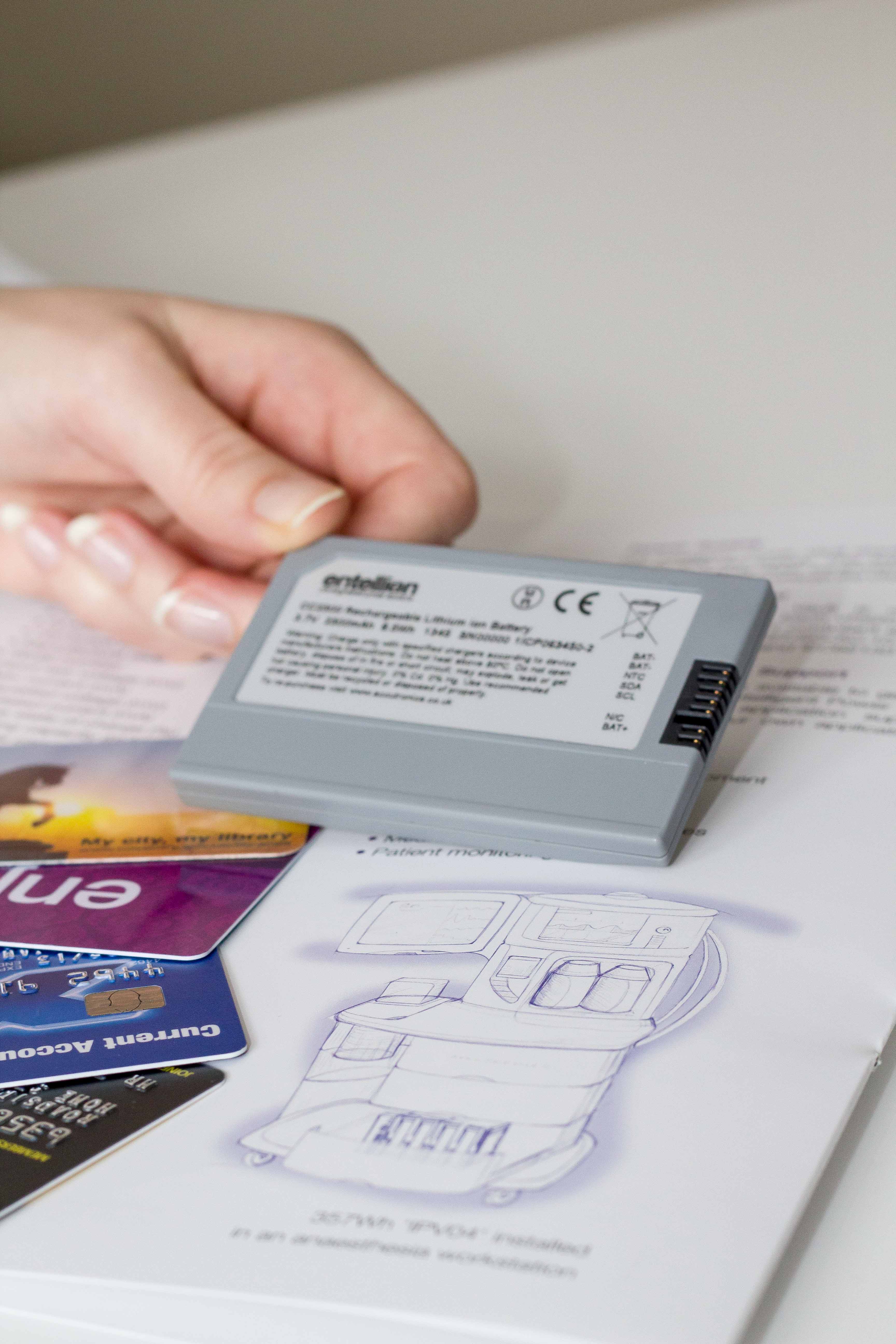 Improvements in battery life, battery density, protection circuits, smart features, and sustainable design engineering are all necessary if we want to increase longevity.

Despite these improvements, it is important to remember that a battery is a consumable part that will degrade over time. This is why choosing the right battery chemistry is vital. The discharge characteristics of a battery change over time with changes to the electrolyte’s conductivity and impedance. Batteries can also slowly self-discharge when in storage, and exhibit calendar and cycle fade, where the battery performance drops with age.

Design engineers don’t usually have to be concerned with these problems because Lithium-ion batteries typically deliver between 300-500 charge cycles before performance drops, by which time the device is most likely at the end of its lifecycle or a removable battery can simply be replaced. However, this isn’t viable with implantable devices. Here, design engineers must very closely examine the affects of chemistry on the discharge profile and calendar life of the battery.

This is easier said than done for some implantable devices. ICDs, for example, need to provide a continuous low-current monitoring function as well as high-pulse currents of 2-3A to charge the capacitors when delivering a high-energy shock to the heart. This is like asking a long-distance athlete to do multiple 100m sprints over the course of a 5000m race. Not an easy task.

By considering how the discharge profile will change over time, design engineers can create a model that can accurately predict the end of the battery’s life. This will prove particularly important in overcoming the issue of early surgery for patients whose ICDs are still capable of delivering many high-discharge pulses.

Two of the biggest enemies of energy dense batteries such as lithium-ion are high temperatures and storage at a high state of charge. These two variables can quickly degrade cells and cause permanent damage.

If batteries are stored at high temperatures, or if the storage period exceeds 12 months, the internal protection electronics will enter a ‘hibernation mode’ to protect internal cells from damage caused by over discharge. The same principle can be developed and applied to protection circuits used in IMDs that require infrequent application, reducing battery drain.

The Future
Continued innovation by medical device OEMs will create further incentives to develop longer life batteries. New research into nano-materials and charging technology is already paving the way for flexible, self-healing batteries with reversible chemistries that will offer incredibly long lifespans as well as fast and wireless inductive charging.

While this technology is still in the very early stages of development and requires many years of reliability testing before it can be used widely, it will open up sectors beyond the medical industry into wearable, healthcare and patient environments, providing OEMs with further profitable avenues. Maybe then our phones can focus on being phones rather than pseudo-medical devices and make it through more than a day on a full charge.