Maria Avelar’s baby doesn’t make a sound when he cries, but she knows when he’s had a tough day.

This morning, five-month-old Isaac Acevedo is attached to a ventilator in the neonatal intensive care unit (NICU). “He looks at me, he cries and he holds my fingers,” Avelar says. “He has ups and downs but he is a strong little baby.”

Isaac was born at just 24 weeks — four months early — at Providence Tarzana Medical Center in the San Fernando Valley. He weighed 1 pound, 5 ounces. Since then, he’s seen more specialists than Avelar can remember — for his heart, lungs, brain, eyes, and stomach.

In the past, premature infants as ill as Isaac were often transferred to Children’s Hospital Los Angeles in Hollywood. But Steven Chin, a neonatologist there, said that didn’t make a lot of sense. Transferring such sick kids put them at risk of worse outcomes, and it was expensive.

“It costs a lot of money to send patients to different places,” Chin says. “It is not convenient to the families. It separates them and causes hardship for them.”

So Children’s Hospital Los Angeles started partnering with hospitals in the Providence Health & Services system so children could stay in their own communities.

The first partnership was with Providence Tarzana Medical Center. The hospital had a NICU, but it didn’t have the same level of expertise as Children’s. Beginning in 2015, doctors from Children’s Hospital Los Angeles Medical Group started operating the Tarzana hospital’s intensive care units for newborns and children, as well as the pediatric inpatient unit there. 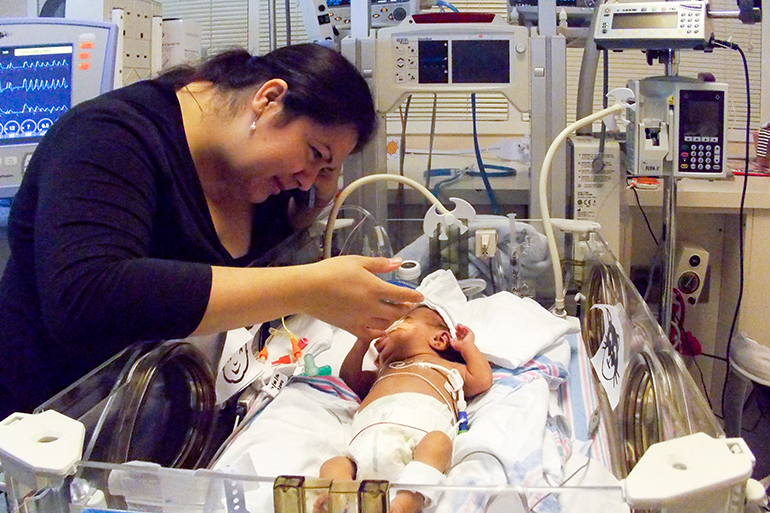 Maria Avelar, 36, gave birth prematurely to Isaac Acevedo in May 2016. He has seen specialists for his lungs, heart, eyes, brain and stomach. Through a partnership with Providence Tarzana Medical Center, Children’s Hospital Los Angeles doctors are operating the neonatal intensive care unit where Acevedo has been since his birth. (Anna Gorman/KHN)

For patients, that meant 24/7 monitoring by physicians and access to specialists from the Children’s medical group.

“Every subspecialty we have available to us at Children’s Hospital Los Angeles, we have those services available to us now at Providence Tarzana Medical Center,” says Chin, who also directs the NICU in Tarzana.

Children’s hospitals provide highly specialized care, but there are only about 200 of them in the nation. That means families sometimes have to travel long distances. The innovative partnership — in which a children’s hospital shares revenue and costs with a community hospital — changes that dynamic.

Similar partnerships are underway in several states, including Pennsylvania, Illinois and Washington.

“It is really hard to find these specialized, highly-trained people,” says Mark Wietecha, president and CEO of Children’s Hospital Association, which represents pediatric hospitals nationwide. “Trying to staff up for that on your own is pretty inefficient.”

More children’s hospitals may follow suit as they seek to expand their reach and prove their value in the face of growing pressure to reduce costs, says Glenn Melnick, a health economist and professor at the University of Southern California.

“For children’s hospitals generally, it is a very clever move,” Melnick says. “They will now have their footprint in many facilities in the community and it provides them some protection against what I think will be growing pressure on high-priced providers.”

The collaborations, Melnick says, also boost the reputation and revenue of the community hospitals.

But there could be a downside: “I do worry about the fact that there are a limited number of children’s specialists. They are going to be spreading themselves thinner,” Melnick says.

Children’s Hospital Los Angeles is already expanding its partnerships. The CHLA Medical Group now runs the NICU at Providence Holy Cross Medical Center in Mission Hills, and doctors from Children’s will be at Providence St. John’s Health Center in Santa Monica starting in January. At both those hospitals, the doctors are contracted to provide the care.

The doctors at Children’s split their time between their own hospital and one of the Providence facilities. Because of the partnership, CHLA Medical Group is hiring more neonatologists.

At Providence Tarzana, the newborn intensive care unit has 21 beds. One morning in October, only eight of them were in use. Isaac, who has been there since his birth in May, was the oldest patient there. He had his own room, where small Nemo and Dory stuffed animals hung from a monitor on the crib.

Since Isaac’s arrival, he has undergone several surgical procedures and received food and medicine through tubes. He’s grown to almost seven pounds, but he still needs to gain more weight.

Nurse manager Michele Lavin told Isaac’s mom that she didn’t know when he would leave the NICU. “Every day he gets stronger,” Lavin says. “We will see how he does. He’ll let us know.”

Lavin says having new doctors from Children’s has changed the culture at the Tarazana hospital. But she says she appreciates the collaboration, teaching and around-the-clock coverage by physicians.

Before, nurses often had to call a doctor to come in if something happened in the middle of the night, Lavin says. “A lot more of it was on the registered nurses and respiratory therapists to keep the baby stable until the doctor got in here.”

The partnership has raised the quality of care at the Providence Tarzana hospital, Chief Executive Dale Surowitz says. For example, unnecessary use of antibiotics and lengths of stay in the NICU have both decreased.

Avelar said she was grateful Isaac was able to stay at Providence Tarzana after his birth. “I grew up [in the local community],” she says. “My doctors are here. Everything is here.”

But in the end, Isaac couldn’t get everything he needed there — despite the partnership with Children’s. He still couldn’t breathe on his own, and doctors determined he needed specialized surgery on his airway. So just before Halloween, he was transferred to Children’s Hospital Los Angeles.

Chin says that in the “rare instance” when children have a condition that can’t be addressed at Providence Tarzana, as in Isaac’s case, they will be transferred to Children’s.

Avelar says she’s glad her son continues to get the care he needs, though she wishes he could have stayed at Tarzana, where she knew everyone. Children’s Hospital, she says, is “just too big.”

KHN’s coverage in California is funded in part by Blue Shield of California Foundation.

This story also ran on KPCC