The never-ending fight against bacteria has taken a turn in humanity’s favor with the announcement of a tool that could give the upper hand in drug research.

Bacterial resistance to antibiotics has produced alarming headlines in recent years, with the prospect of commonly prescribed treatments becoming obsolete setting off alarm bells in the medical establishment.

More efficient ways of testing replacements are desperately needed, and a team from the Okinawa Institute of Science and Technology Graduate University (OIST) has just found one.

In their paper, published in ACS Sensors, the scientists look at a microbial structure called biofilms – bacterial cells that band together into a slimy matrix.

These are advantageous for bacteria, even giving resistance to conventional antibiotics. With properties like these, biofilms can be hazardous when they contaminate environments and industries; everything from tainting food production to clogging sewage treatment pipes. Biofilms can also become lethal if they make their way into medical facilities.

Understanding how biofilms are formed is key to finding ways to defeat them, and this study brought together OIST scientists from backgrounds in biotechnology, nanoengineering and software programming to tackle it.

The team focused on biofilm assembly kinetics – the biochemical reactions that allow bacteria to produce their linked matrix structure. Gathering intelligence on how these reactions function can tell a lot about what drugs and chemicals can be used to counteract them.

No tools were available to the team that would allow them to monitor biofilm growth with the frequency they needed to have a clear understanding of it. So, they modified an existing tool to their own design.

Dr. Nikhil Bhalla, working in OIST’s Micro/Bio/Nanofluidics Unit led by Prof. Amy Shen took to the nanoscale to find a solution: “We created little chips with tiny structures for E. coli to grow on,” he said. “They are covered in mushroom shaped nano-structures with a stem of silicon dioxide and a cap of gold.”

Now all the team had to do was find some bacteria to work with. Reaching out to OIST’s Structural Cellular Biology Unit, the team were helped by Dr Bill Söderström, who supplied stocks of E. coli on the surface of nanomushroom chips for the team to study.

When these nanomushrooms are subject to a targeted beam of light, they absorb it by Localized Surface Plasmon Resonance (LSPR). By measuring the difference between light wavelengths entering and exiting the chip, the scientists could make observations of the bacteria growing around the mushroom structures without disturbing their test subjects and affecting their results.

“This is the first time we have used this sensing technique to study bacterial cells,” said Dr. Riccardo Funari, the team’s resident biotechnologist, “but the problem we found was we couldn’t monitor it in real time.” 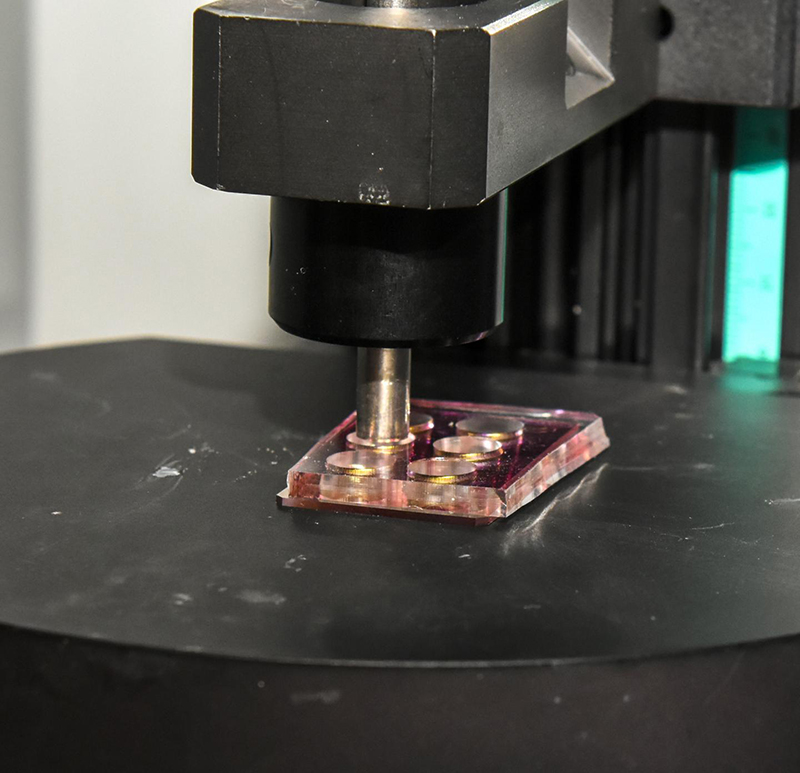 Getting a constant stream of data from their LSPR setup was possible, but required a whole new set of software to make it functional. Fortunately, research technician Kang-yu Chu was on hand to lend his programming expertise to the problem.

“We made an automatic measuring program with instant analysis based on existing software, which let us process the data with one click. It greatly reduced the manual work involved and let us correct any problems with the experiment as they happen,” said Kang-yu.

Now these three disciplines have combined to make a benchtop tool that can be used in virtually any laboratory, and there are plans to miniaturize the technology into a portable device that could be used in a huge array of biosensing applications.

“Studies on clinically relevant microorganisms are coming next,” said Dr. Funari, “and we’re really excited about the applications. This could be a great tool for testing future drugs on lots of different kinds of bacteria.” For now at least, humans are taking the lead in the bacterial battle.