Product innovations in medical imaging technology are primarily aimed at improving image resolution and reducing equipment and procedural costs. But regardless of the equipment, electronic performance quickly declines after a critical temperature is reached. Cooling is vital for electronic-rich technologies  such as Positron Emission Tomography (PET) and Single-Photon Emission Computed Tomography (SPECT). Because temperature variations degrade image quality and reliability of PET and SPECT scans, optimizing cooling solutions that increase performance of medical imaging equipment while reducing size and cost is a priority for manufacturers.

PET is a gamma-based imaging technique that allows doctors to check for diseases. The scan uses a special dye that has radioactive tracers. The radioactive atoms are formed by bombarding normal chemicals with neutrons to create short-lived radioactive isotopes in a specialized tracing substance production equipment called cyclotron; the equipment is based on linear acceleration technology. Most PET scanners use a radiotracer called fluorodeoxyglucose (FDG), which is similar to naturally occurring glucose except that it is radioactive.

These tracers are injected into a vein in the arm, and organs and tissues then absorb the tracer. After the patient is injected with a radioactive substance, they are placed on a flat table that moves in increments through a donut-shaped housing. This housing contains the circular gamma ray detector array, which has a series of scintillation crystals, each connected to a photomultiplier tube. The crystals convert the gamma rays, emitted from the patient, to photons of light, and the photomultiplier tubes convert and amplify the photons to electrical signals. These electrical signals are then processed by the computer to generate images.

The gamma rays used for imaging are produced when a positron meets an electron inside the patient’s body, an encounter that annihilates both electron and positron and produces two gamma rays travelling in opposite directions. By mapping gamma rays that arrive at the same time, the PET system is able to produce an image with high spatial resolution.

Unlike other imaging tests such as CT or MRI, PET scans show problems at the cellular level. This gives doctors the best view of complex systemic diseases. When PET is used to detect cancer, it allows your doctor to see how the cancer metabolizes, and whether it has spread, or metastasized, to new areas.

The SPECT technique is similar to PET, but the radioactive substances used (Xenon-133, Technetium-99, Iodine-123) have longer decay times than those used in PET, and emit single instead of double gamma rays. SPECT can provide information about blood flow and the distribution of radioactive substances in the body. Its images have less sensitivity and are less detailed than PET images, but the SPECT technique is less expensive than PET.

PET scans use a specific particle accelerator known as a cyclotron (Figure 1), in which a fluid or gas traveling in an outward spiral path is bombarded with neutrons to create charged particles. The spiral path is maintained by a magnetic field, and the particles are accelerated by an applied electric field.  The radioactive substance produced has a very short half-life (i.e., a rapid decay time). Most PET systems use a radio tracer made from glucose, which is drawn to tumors. After this substance is ingested, inhaled or injected into the patient, it concentrates in the tumors within the body, allowing the PET system to image the tumor by detecting the gamma rays coming from the patient. Because of the short half-life of the radioactive material, the cyclotron needs to be installed near the PET system, so it can be generated and given to the patient just before the imaging is done.

In PET and SPECT systems, cooling of both the cyclotron equipment that generates the radioactive substances and the detector banks in the imaging systems is required. Temperature control within the cyclotron system is critical for operational integrity, performance accuracy and system reliability. Cyclotrons require around 80 kilowatts of cooling, 120 liters a minute of flow and need a 10 to 15 degree inlet temperature.

Within the PET and SPECT systems, the ionizing radiation semiconductor detectors require sophisticated cooling to reduce leakage currents (noise source) that affect image quality. Furthermore, moisture levels in the detector itself is a concern, as this can impact performance and reliability. In addition, amplifiers, power supplies and the vacuum chamber all need cooling. Typically, the PET and SPECT systems have a heat load range of 1~5KW. In addition, components with PET and SPECT imaging gantry systems are subject to tremendous rotational speeds and acceleration forces (G-forces). As a result, liquid pumps must be able to maintain constant flow and pressure while under high stress caused by high g-forces. 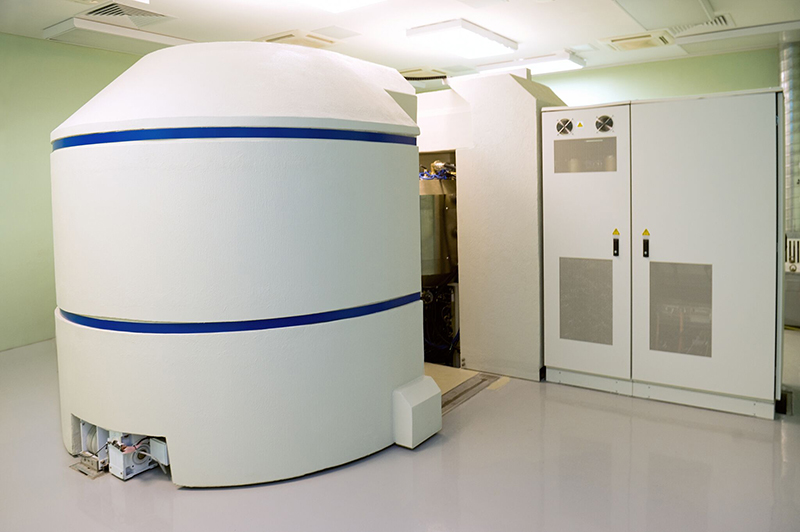 Liquid cooling systems (LCS), which are self-contained units that recirculate coolant to a predefined set-point temperature, allow for optimal temperature stabilization for more precise temperature control. LCS are able to dissipate the large amount of heat generated in the densely packed electronic environment of PET systems. The introduction of a liquid coolant into a system of electronics need not be an item of concern as long as the LCS is designed and assembled properly. LCS offer higher efficiency than air-based heat exchangers, and provide more rapid cooling and higher reliability. Compact liquid cooling systems offer a high coefficient of performance (COP) that ensures efficient, low power operation to maximize uptime and optimize performance.

One critical component in a liquid cooling system (LCS) is the pump. Pumps are in constant operation when the unit is turned on and typically have the shortest mean time between failure (MTBF) of all components due to friction wear of bearings, pump blades and seals. If poorly chosen, the pump will fail prematurely and the LCS will fail and cause the end instrument to stop working. This can be a problem for expensive medical, laser or semiconductor equipment where hundreds of thousands of dollars could be lost per day. Compared to centrifugal pumps, spindle screw pumps provide higher reliability, performance and efficiency for liquid cooling systems.

Spindle screw pumps also have a simple construction. A three-screw pump, for example, features a single rotor element that is powered, while two others are idle. The idle rotors are rotated by liquid pressure, essentially generating a fluid bearing, or hydrodynamic film, that provides radial support similar to journal bearings. Symmetrical pressure loading on the power rotor eliminates the need for radial bearings to absorb radial forces.

The pump head and motor are combined into one waterproof housing unit and can push either oil or water coolant. The fluid delivered by a screw pump does not rotate, but moves linearly. The rotors work like endless pistons, which continuously move forward. Flow through a screw pump is axial and in the direction of the power rotor. The inlet hydraulic coolant that surrounds the spindles is trapped as the spindles rotate. The coolant is pushed uniformly with the rotation of the spindles along the axis and is forced out the other end. Due to this, the power consumption is reduced, higher efficiency is achieved and the overall motor size can be reduced. This also enables the spindle screw pump to move fluids of higher viscosity without losing flow rate, and pressure changes have little impact on spindle screw pumps, This is important in a rotating application, such as a CT gantry system used in a CT scanner, as the pump is able to maintain constant flow and pressure while under high stress caused by high g-forces.

Long-life operation is built into the spindle screw design due to no metal-to-metal contact between moving components. This minimizes friction wear and abrasions that can cause cavitation. The flexible mechanical assembly allows the use of a smaller strainer with higher mesh size that extends maintenance intervals and reduces the overall cost of ownership.

Given the complexity of some PET and SPECT systems, use of a custom designed LCS (Figure 3) with plug-and-play components may be a good solution. For example, quick connect fittings to allow easy service and maintenance, such as a bottom drain for removing the coolant by gravity, or a pump that is easy to swap out if necessary, add to the system’s ease-of-use. Custom housing configurations for unique environments may be required.