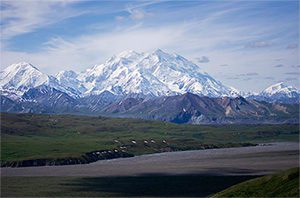 The mountaineering team, comprised of military members, veterans and a physician from non-profit organization U.S. Expeditions and Explorations (USX) and Cardiac Insight, climbed Denali in Alaska to measure the effects of high-altitude exercise on the heart.

In older men, especially those unaccustomed to intense physical exertion and with coronary artery disease (CAD) risk factors, there is a higher risk of sudden cardiac death on the first day of exercise at altitude. Sudden cardiac death is the most common cause of non-traumatic death in men over 34 while skiing or hiking at high altitude.

Researchers believe high altitude increases the likelihood of cardiac arrhythmias, which the Cardea Solo’s analysis software system can detect, including atrial fibrillation. While most cardiac arrhythmias are benign, those with risk factors for CAD and arrhythmia could be at greater risk of sudden cardiac death.  However, limited data on this subject exists, especially with participants ranging above 5,000 meters (16,404 feet). The Cardea Solo wire-free wearable sensor, which records every heartbeat for up to seven days, can unobtrusively capture high-fidelity data in this challenging environment, according to a statement from the company.

“We are pleased to report that because of the durability and ease-of-use of the Cardea Solo sensor and its associated software capabilities, we were able to easily secure a large amount of data,” Dr. David Ohlson, director of research initiatives for USX said in the statement. “The continuous nature of the 28 days of data we captured will help provide new insights into how frequently abnormal heart rhythms occur in healthy individuals at high altitude and give us a model for larger studies in the future.”

“Cardea Solo’s participation in USX’s Denali expedition is helping to provide valuable insight into a significant health risk and the heart’s performance related to the impact of sports and activities at high altitudes. This could never be accomplished — until now. The research data retrieved by USX using Cardea Solo on Denali will contribute to the current body of knowledge and future study design,” said Brad Harlow, CEO of Kirkland, Wash.-based Cardiac Insight.

The latest version of Cardea Solo software also features batch file analysis capabilities. Researchers own and control all of their data, and study participant compliance with Cardea Solo wear time of up to seven days has been reported as excellent, according to the company.