Clodagh O’Shea, an associate professor in the Salk Institute’s Molecular and Cell Biology Laboratory, is among the first recipients of a grant from the Faculty Scholars Program, a new partnership of Howard Hughes Medical Institute (HHMI), the Bill & Melinda Gates Foundation and the Simons Foundation for early career researchers whose work shows the potential for groundbreaking contributions in their fields. O’Shea is one of 84 Faculty Scholars who will receive $100,000–$400,000 per year over five years to support their pursuit of innovative research.

O’Shea is at the forefront of cutting-edge technologies to design synthetic viruses and other genetic devices that are controlled and able to selectively target cancer cells. Each time a virus infects a cancer cell and multiplies, the virus kills the cell by bursting it open to release thousands of viral progenies, which go on to target other cancer cells. Synthetic viruses designed to lock onto and rupture cancer cells while leaving normal cells intact could result in a novel cancer therapy with virtually no side effects. 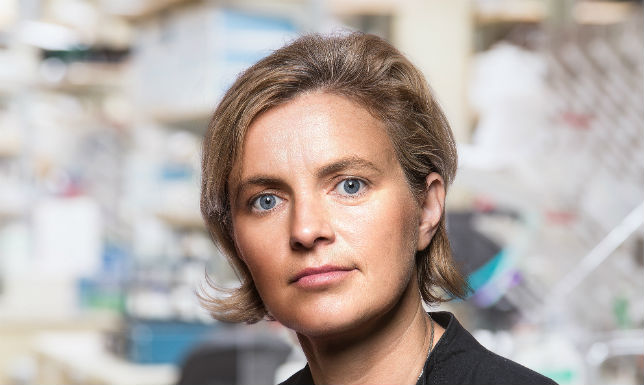 “Clodagh’s innovative and cutting-edge research has the potential to unlock promising new ways of precisely and effectively targeting cancers and indeed opens new avenues for treating other diseases as well,” said Salk President Elizabeth Blackburn. “We are extremely pleased that her work is being recognized with an inaugural grant from this important program.”

To successfully redesign and program synthetic viral therapies, O’Shea has developed new technologies that enable viral gene delivery devices, cancer therapies and vaccines to be assembled using libraries of modular DNA parts, akin to using Lego pieces to build a sculpture or robot. O’Shea proposes to further develop these genetic machines as diagnostic ‘drones’ that identify the earliest traces of cancer; synthetic viruses that act like guided missiles to destroy tumor cells while preventing therapeutic resistance; and viruses that home in on damaged tissues to promote wound healing and stave off infection.

“I am very honored to receive a HHMI faculty scholar award, which we will use to identify critical 3D genomic interactions that are subverted in both viral infection and cancer and the rational design of powerful synthetic viral therapies for the treatment of patients suffering from cancer,” says O’Shea, who is the holder of the William Scandling Developmental Chair.

Another aspect of O’Shea’s research is to unravel the structural code that determines the functions of DNA in the cell nucleus and if it can be accessed and used. A cell’s genomic material is not a simple helix: DNA is coiled around proteins to form complex three-dimensional packages called chromatin to fit into the small space of a cell nucleus. Charting and determining the structure of chromatin at multiple scales is a vital step in understanding how viruses access genetic material to replicate and kill cells. To this end, her lab is developing new techniques to visualize how genomic material is structured in time and space. These studies have the potential to reveal the structural code that determines if a gene is “on” or “off” state in health and disease.

The program’s support enables O’Shea, who has made dramatic progress in building selectively replicating cancer-killing viruses as well as visualizing chromatin, to further refine her genetic machines and designs to be able to, for example, keep up with a tumor’s constantly molecular variations (heterogeneity), engage a protective immune response and target specific mutations related to hard-to-treat cancers (e.g., p53 mutations).

“We are very excited to welcome these accomplished scientists into the HHMI community,” said HHMI President Erin O’Shea. “We’re equally gratified to work alongside our philanthropic partners to help these early-career scientists move science forward by pursuing their bold ideas.”

The Faculty Scholars competition is open to basic researchers and physician scientists at more than 220 eligible institutions who bring innovative approaches to the study of biological problems. Early-career researchers with more than 4, but no more than 10, years of experience as faculty members were eligible to apply for this competition.