Researchers who are working to develop wearable electronics have reached a milestone: They are able to embroider circuits into fabric with 0.1 mm precision — the perfect size to integrate electronic components such as sensors and computer memory devices into clothing.

With this advance, the Ohio State University researchers have taken the next step toward the design of functional textiles — clothes that gather, store, or transmit digital information. With further development, the technology could lead to shirts that act as antennas for your smart phone or tablet, workout clothes that monitor your fitness level, sports equipment that monitors athletes’ performance, a bandage that tells your doctor how well the tissue beneath it is healing — or even a flexible fabric cap that senses activity in the brain. 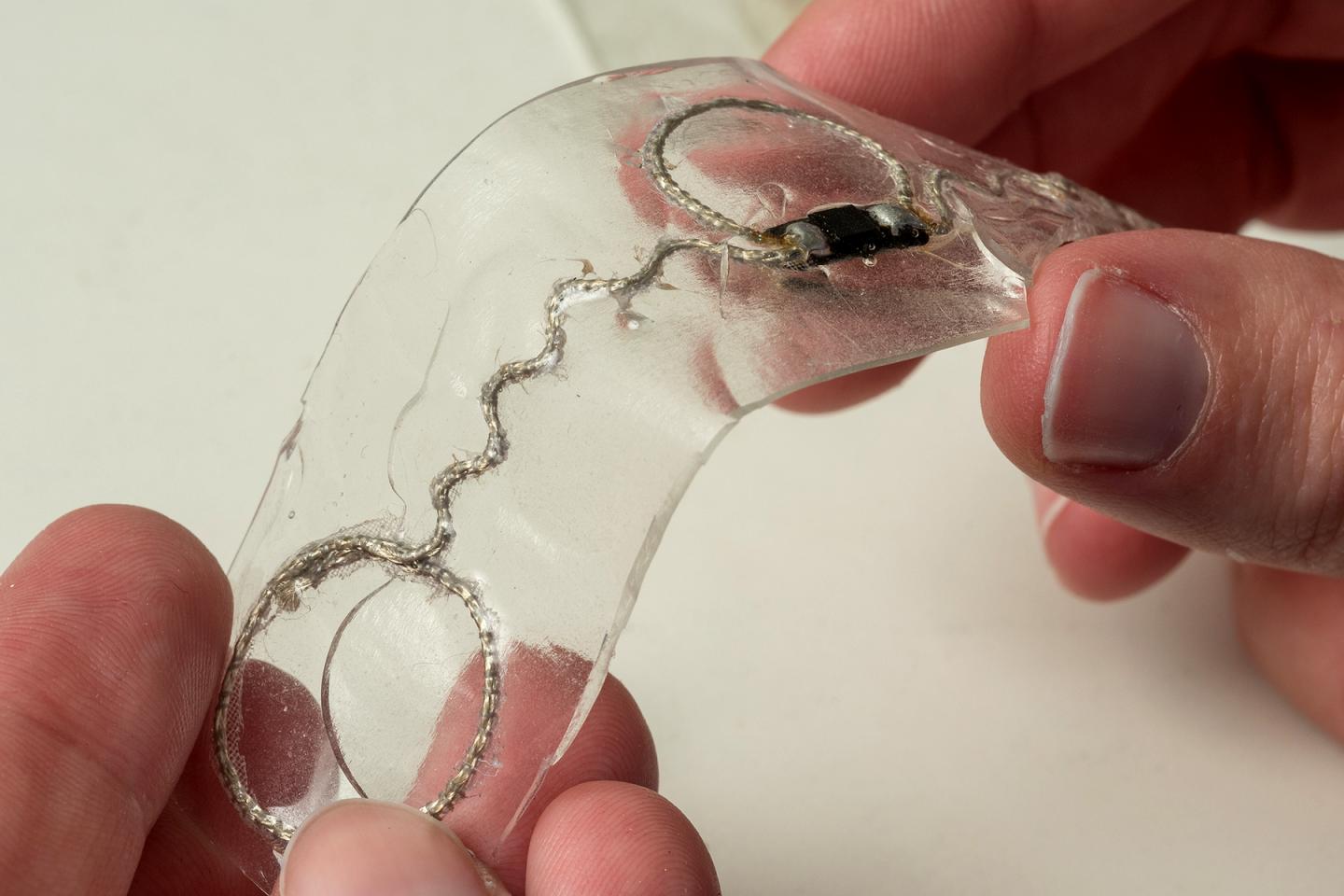 Researchers at The Ohio State University are developing embroidered antennas and circuits with 0.1 mm precision — the perfect size to integrate electronic components such as sensors and computer memory. Image courtesy of

That last item is one that John Volakis, director of the ElectroScience Laboratory at Ohio State, and research scientist Asimina Kiourti are investigating. The idea is to make brain implants, which are under development to treat conditions from epilepsy to addiction, more comfortable by eliminating the need for external wiring on the patient’s body.

“A revolution is happening in the textile industry,” said Volakis, who is also the Roy & Lois Chope Chair Professor of Electrical Engineering at Ohio State. “We believe that functional textiles are an enabling technology for communications and sensing — and one day even medical applications like imaging and health monitoring.”

Recently, he and Kiourti refined their patented fabrication method to create prototype wearables at a fraction of the cost and in half the time as they could only two years ago. With new patents pending, they published the new results in the journal IEEE Antennas and Wireless Propagation Letters.

In Volakis’ lab, the functional textiles, also called “e-textiles,” are created in part on a typical tabletop sewing machine–the kind that fabric artisans and hobbyists might have at home. Like other modern sewing machines, it embroiders thread into fabric automatically based on a pattern loaded via a computer file. The researchers substitute the thread with fine silver metal wires that, once embroidered, feel the same as traditional thread to the touch.

“We started with a technology that is very well known–machine embroidery–and we asked, how can we functionalize embroidered shapes? How do we make them transmit signals at useful frequencies, like for cell phones or health sensors?” Volakis said. “Now, for the first time, we’ve achieved the accuracy of printed metal circuit boards, so our new goal is to take advantage of the precision to incorporate receivers and other electronic components.”

The shape of the embroidery determines the frequency of operation of the antenna or circuit, explained Kiourti.

The shape of one broadband antenna, for instance, consists of more than half a dozen interlocking geometric shapes, each a little bigger than a fingernail, that form an intricate circle a few inches across. Each piece of the circle transmits energy at a different frequency, so that they cover a broad spectrum of energies when working together–hence the “broadband” capability of the antenna for cell phone and internet access.

“Shape determines function,” she said. “And you never really know what shape you will need from one application to the next. So we wanted to have a technology that could embroider any shape for any application.”

The researchers’ initial goal, Kiourti added, was just to increase the precision of the embroidery as much as possible, which necessitated working with fine silver wire. But that created a problem, in that fine wires couldn’t provide as much surface conductivity as thick wires. So they had to find a way to work the fine thread into embroidery densities and shapes that would boost the surface conductivity and, thus, the antenna/sensor performance.

Previously, the researchers had used silver-coated polymer thread with a 0.5-mm diameter, each thread made up of 600 even finer filaments twisted together. The new threads have a 0.1-mm diameter, made with only seven filaments. Each filament is copper at the center, enameled with pure silver.

They purchase the wire by the spool at a cost of 3 cents per foot; Kiourti estimated that embroidering a single broadband antenna like the one mentioned above consumes about 10 feet of thread, for a material cost of around 30 cents per antenna. That’s 24 times less expensive than when Volakis and Kiourti created similar antennas in 2014.

In part, the cost savings comes from using less thread per embroidery. The researchers previously had to stack the thicker thread in two layers, one on top of the other, to make the antenna carry a strong enough electrical signal. But by refining the technique that she and Volakis developed, Kiourti was able to create the new, high-precision antennas in only one embroidered layer of the finer thread. So now the process takes half the time: only about 15 minutes for the broadband antenna mentioned above.

One prototype antenna looks like a spiral and can be embroidered into clothing to improve cell phone signal reception. Another prototype, a stretchable antenna with an integrated RFID (radio-frequency identification) chip embedded in rubber, takes the applications for the technology beyond clothing. (The latter object was part of a study done for a tire manufacturer.)

Yet another circuit resembles the Ohio State Block “O” logo, with non-conductive scarlet and gray thread embroidered among the silver wires “to demonstrate that e-textiles can be both decorative and functional,” Kiourti said. 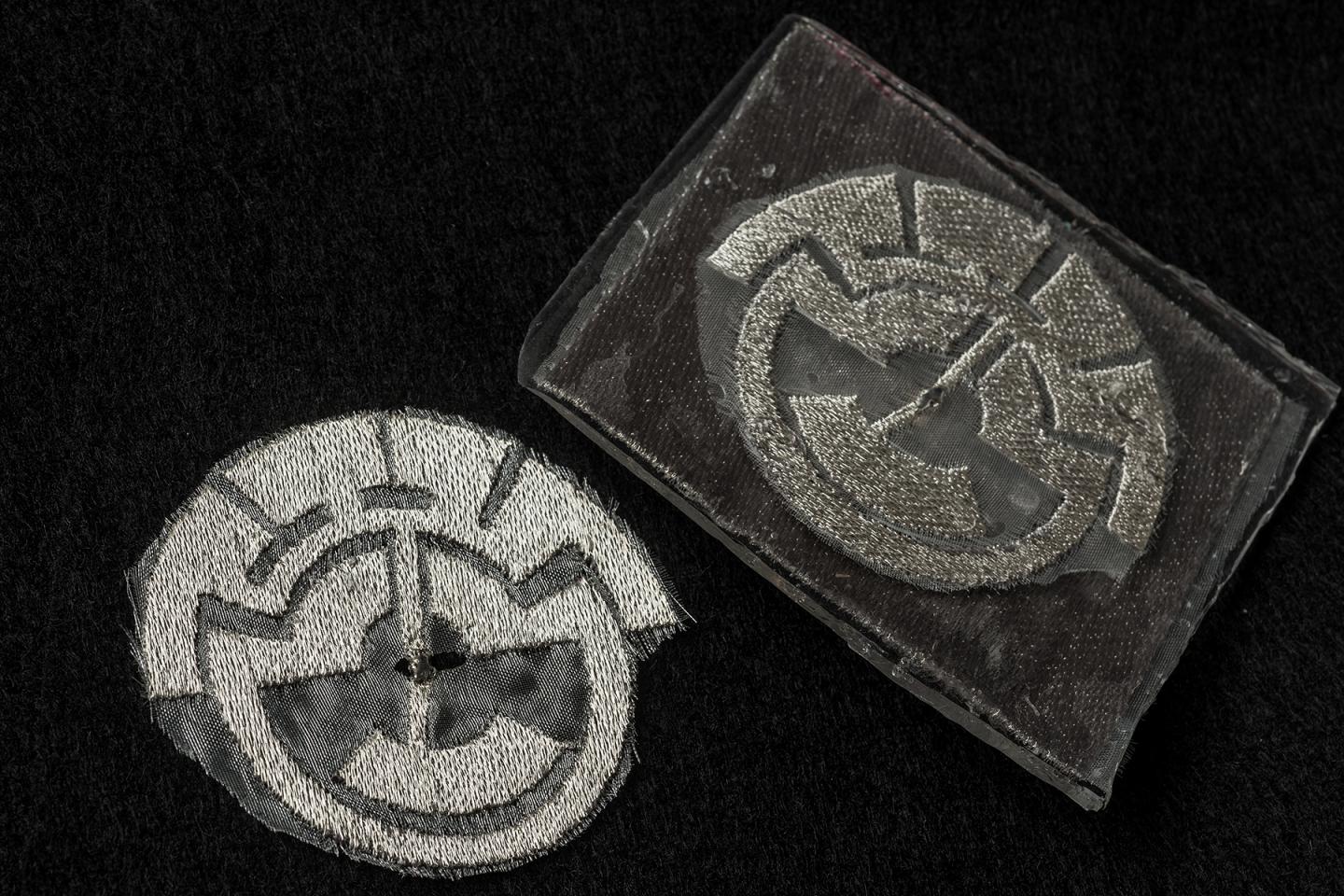 They may be decorative, but the embroidered antennas and circuits actually work. Tests showed that an embroidered spiral antenna measuring approximately six inches across transmitted signals at frequencies of 1 to 5 GHz with near-perfect efficiency. The performance suggests that the spiral would be well-suited to broadband internet and cellular communication.

In other words, the shirt on your back could help boost the reception of the smart phone or tablet that you’re holding – or send signals to your devices with health or athletic performance data.

The work fits well with Ohio State’s role as a founding partner of the Advanced Functional Fabrics of America Institute, a national manufacturing resource center for industry and government. The new institute, which joins some 50 universities and industrial partners, was announced earlier this month by U.S. Secretary of Defense Ashton Carter.

Syscom Advanced Materials in Columbus provided the threads used in Volakis and Kiourti’s initial work. The finer threads used in this study were purchased from Swiss manufacturer Elektrisola. The research is funded by the National Science Foundation, and Ohio State will license the technology for further development.

Until then, Volakis is making out a shopping list for the next phase of the project.

“We want a bigger sewing machine,” he said.