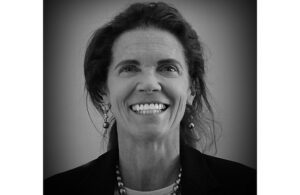 Sarah Kalil is CEO and co-founder of CoreMap. [Photo courtesy of CoreMap]

CoreMap today announced it closed a $20 million Series B financing to accelerate the development of its cardiac arrhythmia diagnostic technology and launch pilot studies.

The Burlington, Vermont–based company said it also closed on a $3 million Series A Milestone financing that was part of its $10.5 million Series A in September 2020. In addition, CoreMap won a National Science Foundation research grant that same month after participating as one of the startups in MassMEDIC’s IGNITE virtual accelerator when the program relaunched in 2019.

CoreMap said pre-clinical and clinical studies have successfully demonstrated the CoreMap System, which consists of the company’s high-resolution Invenio catheter and VidereX workstation.

“We have a catheter that will go inside the heart to record the electrical activity with high spatial resolution and create unambiguous electrograms. And that’s not possible today with today’s technology,” co-founder and CEO Sarah Kalil said yesterday in an interview with Medical Design & Outsourcing ahead of the announcement.

An estimated 33 million people worldwide have atrial fibrillation (AFib), including almost 12 million in the U.S. Kalil said AFib presents a unique challenge for successful ablation, the burning or freezing of tissue.

“In other cardiac arrhythmias — not atrial fibrillation — ablation is incredibly effective. The single-procedure success rate is very high,” Kalil said. “The problem with atrial fibrillation is that each beat, the propagation patterns are different. And so the diagnostic is lacking to say, ‘In this patient, if you create this ablation lesion set, you can interrupt the arrhythmia.'”

Kalil said the Invenio catheter uses microscale electrodes, though she declined to discuss how they’re manufactured, citing trade secrets. But when asked to describe the CoreMap System in simple terms, she likened it to high-resolution glasses that can show electrophysiologists where ablation would be effective.

“We start with incredibly small electrodes … in a pair configuration [capturing] just the activity that is happening under a couple of hundred microns of tissue,” she said. “And then we create a grid of those electrode pairs so that we can now calculate the electrical conduction and its velocity between electrode pairs.”

CoreMap’s algorithms can identify “drivers” of AFib in a patient’s heart tissue, she said. As electrical activity travels through the heart, some sites are drivers, and others are followers. Identify and interrupt the drivers, she said, and you can treat AFib.

CoreMap has an R&D team in Boston, data science operations in California, and just hired its first employee in Haifa, Israel, with plans to continue hiring in those locations, Kalil said.

The pilots will consist of mapping studies paired with ablation to hopefully validate the technology with successful patient results. There are no current timelines for regulatory approval or commercialization, Kalil said.

“More important than regulatory approval for us at this point is demonstrating patient outcomes,” she said. “That’s our strategy first.”