4. Cooperation between government and industry is improving 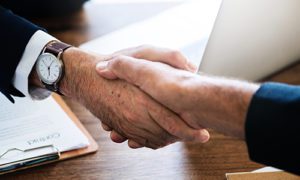 [Photo by rawpixel.com on Unsplash]

The COVID-19 crisis created an environment for greater cooperation between industry and government. The FDA, for example, had issued 84 emergency use authorizations as of April 23, giving temporary greenlights to diagnostic and serological tests, ventilators and other potential weapons against the deadly virus. Meanwhile, state governments and the Centers for Medicare and Medicaid Services tore down barriers that once blocked widespread use of telehealth and other remote monitoring. This has opened the door for physicians to see patients virtually.

The relationship has had some rough patches. President Trump, after invoking the Defense Powers Act, sharply criticized 3M after the company sold some supplies to customers outside the U.S. 3M CEO Mike Roman fired back, but they quickly came to an amicable arrangement.

Mark Leahey, CEO of the Medical Device Manufacturers Association, said the medtech industry benefited from the relationships it built to repeal the medical device excise tax connected to the Affordable Care Act of 2010. Leahy hopes regulators and payers will agree to keep the door open to more telehealth and remote monitoring, and also strengthen rural healthcare.