A patented treatment could restore eyesight for millions of sufferers of corneal disease.

The University of Melbourne–led team of researchers have grown corneal cells on a layer of film that can be implanted in the eye to help the cornea heal itself. They have successfully restored vision in animal trials and are aiming to move to human trials next year.

Victor Fortmann’s vision in one eye failed following a condition called bullous keratopathy. Two donated corneal transplants restored his sight for a period, but he now needs a third to restore his vision in that eye.

Over 2,000 corneal transplants are conducted in Australia each year. But globally there’s a shortage of donated corneas, and the resulting loss in vision affects about 10 million people worldwide.

“We believe that our new treatment performs better than a donated cornea, and we hope to eventually use the patient’s own cells, reducing the risk of rejection,” said Berkay Ozcelik, who developed the film working at the University of Melbourne.

“Further trials are required but we hope to see the treatment trialed in patients next year,” Ozcelik said. 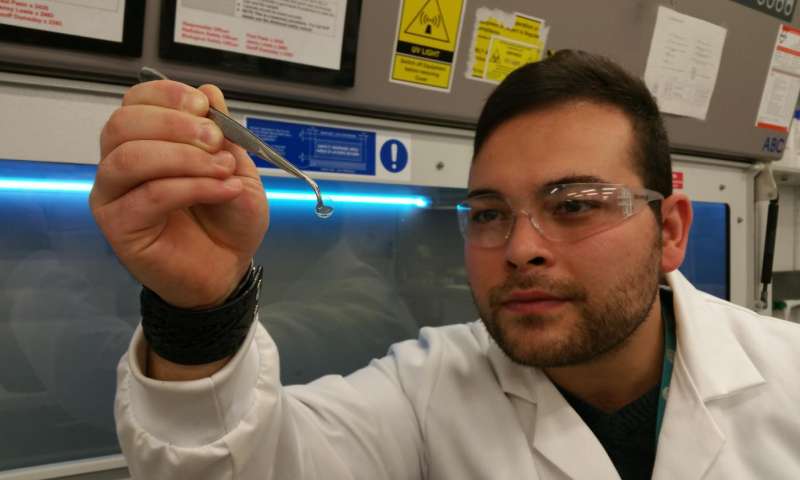 An example of the film implant used for the surgery. (Credit: Fresh Science)

The cornea is the transparent layer at the front of the eye. To remain healthy and transparent, the cornea must remain thin. A layer of specialized cells (corneal endothelial cells) on its inner surface maintain the cornea’s moistness by ‘pumping’ water out of it.

However, trauma, disease and aging can reduce the numbers of these cells, eventually causing the cornea to become swollen and cloudy, leading to vision deterioration and blindness.

The cells cannot regenerate or repair themselves. The only treatment available requires donor corneas to be transplanted into the patient’s eyes. But there’s a worldwide shortage of donor corneas. The transplant process damages some corneal endothelial cells, and the donor cornea may still be rejected by the patient’s immune system.

Berkay and his colleagues grew corneal cells on a specially developed synthetic film that could then be implanted into a patient’s eye.

“The hydrogel film we have developed allows us to grow a layer of corneal cells in the laboratory,” Berkay said. “Then, we can implant that film on the inner surface of a patient’s cornea, within the eye, via a very small incision.”

Once in place the new cells restore the cornea’s vital water-pumping activity, so that the cornea once more becomes transparent.

Thinner than a human hair (50µm), the hydrogel film is perfectly transparent when implanted, and allows the flow of water between the cornea and the interior of the eye. The film completely biodegrades within two months and causes no adverse immune reactions.