Kendall’s stroke was a result of an arteriovenous malformation, or AVM, a rare defect that results in a tangle of abnormal blood vessels that disrupts the normal flow of blood. AVMs are most often found in the brain or spinal cord and affect less than 1 percent of the population.

Accompanied by research associate Lorelei Shoemaker (left), Kendall Kemm visits a neuroscience lab, where she gets a close look at a human brain. Kemm is being treated for an arteriovenous malformation at Stanford Health Care. (Credit: Norbert von der Groeben)

Kendall survived, and is being treated at Stanford Health Care through stereotactic radiosurgery, which uses radiation to shrink and ultimately destroy the AVM in her brain.

Kendall travels from Pennsylvania to Stanford for treatment because Stanford Health Care offers a unique approach using CyberKnife technology, which delivers radiation with unprecedented precision. The CyberKnife was invented at Stanford, and is used to treat a variety of conditions. Steven Chang, MD, professor of neurosurgery, and Scott Soltys, MD, assistant professor of radiation oncology, oversee Kendall’s treatment.

“When Kendall had her stroke, it was devastating,” said Kendall’s mother, journalist Leslie Gudel Kemm. “We spent the better part of the first month crying, and then doing research. So few doctors want to treat kids with this condition, but when we connected with Dr. Chang, he said, ‘We can treat this.’” 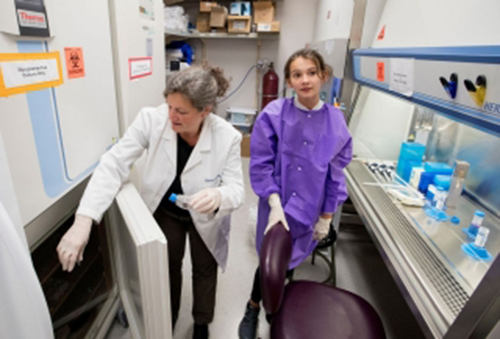 Grateful for the care she received at Stanford Health Care and Lucile Packard Children’s Hospital Stanford, Kendall brainstormed ways to help others with the same condition. Together with her family, she formed Kendall’s Crusade. The nonprofit aims to provide financial assistance to families affected by AVM, raise overall awareness of the condition and support neurosurgery research.

Kendall returned to Stanford in October to continue her treatment. With funds raised through Kendall’s Crusade, she presented a check to Chang to help fund his research on AVM treatment and support a patient travel fund for AVM patients.

“When I first met Kendall and her family, they were so determined to learn all they could about AVMs,” said Chang, who is also the Robert C. and Jeannette Powell Neurosciences Professor. “Although some AVMs are inoperable, the CyberKnife opens up additional treatment options that other technology doesn’t allow.”

Kendall’s AVM is now approximately 90 percent gone, with her next MRI scheduled for next year. Additional treatments will be considered as her progress is monitored. Kendall has remained positive and devoted to her mission to help fellow AVM patients.

“I’m grateful for what we’ve been able to do for the other kids that are going through the same thing as me,” she said. “But I want us to get to a point where the research will help to develop a cure, so no other kids have to go through this.”