Diabetes is a growing epidemic in the United States. Now the seventh leading cause of death, the condition plagues more than an estimated 29 million Americans, according to the Centers for Disease Control and Prevention — and that number continues to rise.

But there’s another troubling issue: Research suggests many people with diabetes aren’t provided adequate resources to follow prescribed dose regimens, so they become “nonadherant,” which leads to serious health issues — and increased health care costs. A 2016 study in the American Journal of Managed Care found that patients with diabetes who are nonadherent spend about $2,700 more in medical costs per year than those who are adherent.

Now MIT spinout Common Sensing aims to solve the nation’s diabetes-management issues by going digital. The startup’s smart insulin-pen cap logs insulin intake data on an app and in the cloud, to help patients better manage their regimen. Moreover, the cap gives doctors a detailed view into patients’ insulin habits and how they affect blood-glucose levels, for more targeted care.

Invented by co-founders James White ’10, SM ’12 and Richard Whalley ’10, the Gocap is now going through clinical studies to test its viability. Most recently, Common Sensing, headquartered in Cambridge, Massachusetts, has partnered with the Joslin Diabetes Center in Boston, where it will collect data on 125 patients using the cap over the next year.

When Gocap finally hits the market, it will be provided to insurers, pharmaceutical companies, and provider and clinician networks, and be free for end users. “We really want these to be available, free of charge, to people that need them,” White says. 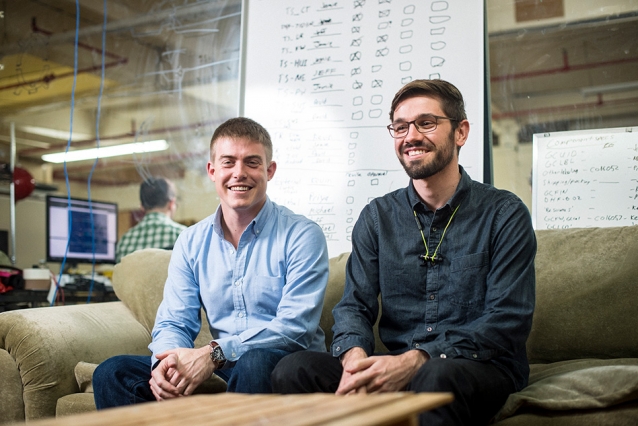 Most diabetes patients use disposable insulin pens, which are adjusted for dosage and can be used numerous times before they’re empty. Each comes with a plastic cap that covers the injection needle.

When a patient uses a new pen, they replace the plastic cap with a Gocap, which uses an optical measurement method to measure the insulin volume in the pen. Each time the cap is removed and then replaced, it records the volume remaining and the time of the dose, which is displayed on a digital screen. Gocap also measures the temperature of the insulin, which can deteriorate at high temperatures. “We can alert people to the fact that they may be storing insulin too hot, which could seriously affect how they use it and how much effect it has on their body,” White says.

Gocap also has a digital component, where most of the tracking and analysis takes place. After each use, the device logs data from the pen via Bluetooth to a mobile app, and sends it to the cloud. On the app, patients can input information about glucose levels from their glucometer, their insulin type, and their meals.

In the cloud, patients can share the data with doctors or family members, who can track it in real time and provide interventions “at critical moments when people are dropping off medications,” White says. “If, say, my son or daughter sees I’ve dropped off from taking my insulin, they can give me a call and ask if I’m having difficulty using it.”

A doctor can use the data to tweak insulin dosage. People with diabetes usually get check-ups once every three to six months, where they provide a record of their glucose readings. The doctor may note high glucose readings over, say, a two-week period, and determine a patient needs more insulin. But that could have been due to missed doses, unbeknownst to the doctor or patient, which happens often, White says. With Gocap, the doctor can see those spikes are due to missed injections, meaning the doses are correct and prescribing more insulin could in fact be dangerous.

Additionally, the Gocap lets doctors watch insulin’s interaction with a person’s diet. They can then make targeted recommendations about, say, increasing dosage before eating certain meals. “Doctors may be afraid to do that otherwise, because if you take too much, you could end up in a coma or go to the hospital,” White says. “But if they can see exactly what’s going on, that gives them the confidence to recommend the correct amount of insulin.”

During their MIT years, White, a mechanical engineering student, and Whalley, a chemistry student, lived together in the Burton Connor building, and both harbored an interest in life sciences and medical technology. After they graduated, they moved into an apartment together while White finished his master’s degree and Whalley worked as a consultant for the biotech industry.

During that time, Whalley became aware of the lack of data in diabetes management, and White was working on new injection methods in the lab of Department of Mechanical Engineering Professor Ian Hunter, where he learned about insulin-adherence issues. When the MIT Media Lab’s 2012 Health and Wellness Innovation hackathon rolled around, the duo built a Gocap prototype — a bulky mess of wires — in their apartment’s kitchen. With that prototype, they launched Common Sensing, in Industry Lab, a co-working space in Cambridge.

Early on, the startup reached out to mentors at MIT, including the Entrepreneurs in Residence at the Martin Trust Center for MIT Entrepreneurship and the MIT Venture Mentoring Service. Among other things, White says, mentors taught them how to ask the right questions. For instance, in the medical device industry, he says, there are many stakeholders with different incentives — the medical device makers, the end users, the insurance providers, the doctors, the hospitals, the pharmaceutical companies, and potentially the government. “The most important question we asked through this process is, ‘How do we make this a product where all those stakeholders can win?’” White says.

To answer that question, Common Sensing has run Gocap through numerous studies, involving, in total, more than 200 diabetes patients. In the last 18 months, the startup has also provided the device to pharmaceutical companies and doctors to gather feedback.

These studies have led to a few redesigns of the product, including changes involving what information to put on the device’s screen, and what needs to be sent to the cloud. “For every design decision, there is a wealth of user experience research to back it up,” White says.

Planned future studies, White says, will investigate the cost of various interventions strategies for users who’ve dropped off their insulin regimen, such as free text messaging or, for pennies more, a phone-based service. “These are the kinds of moments I’m most excited about,” White says. “Because then you can identify who is having the most issues and coach them, which empowers the user to be healthier, saves money for insurance companies, and makes sure pharmaceutical products are being used properly. It’s a win-win for everyone.”