Since 2002, when a Minnesota-based Acuo Technologies released the first vendor-neutral archive (VNA), PACS has been on a slow march to “deconstruction.” Deconstructed PACS include the same components of legacy, proprietary PACS — an archive, a viewer and a worklist/workflow engine — but each component exists as a separate, standards-based application that provides its core function with a high level of competency. 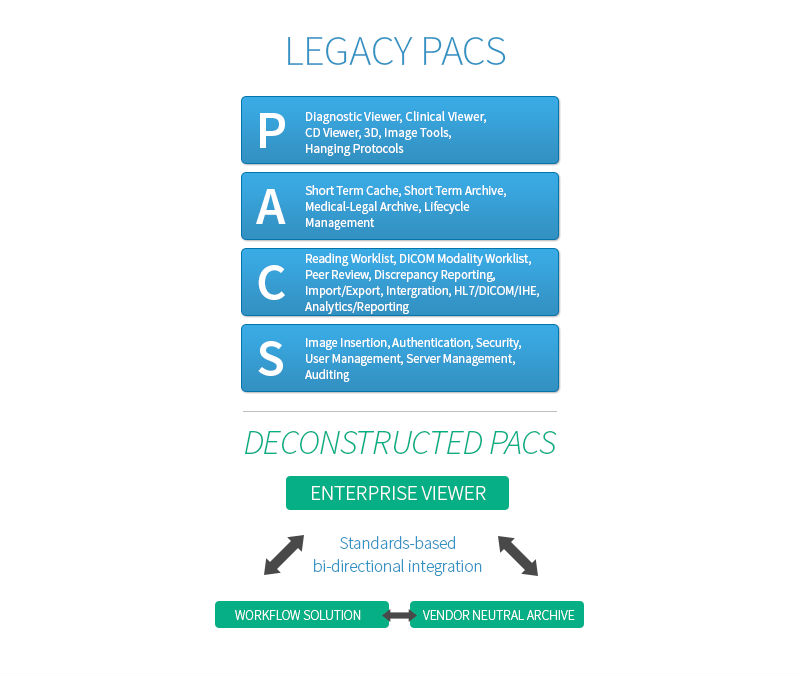 Liberated from siloed systems, decentralized PACS offers a solution to a myriad of trends impacting the technology that supports practice and process of radiology. These trends include modern, mobile workflow, the digitization of all aspects of healthcare and increasing demands for patient image sharing between local and geographically dispersed care teams.

Freeing Radiologists from Swivel Chair Workflow
Today’s PACS workstations are virtually identical in capability to those implemented 5 to 10 years ago. Radiology workspaces include a workstation for every PACS which can number into the dozens depending on the size of the institution. Each PACS has its own mouse, trackball, microphone, high-resolution display and unique user interface for viewing images, creating reports and communications. As radiologists read images and write reports, they move on roller chairs from one workstation display to another, a process called “swivel-chair workflow.”

This work radiology environment, with its workstation hardware and multiple, proprietary user interfaces, is a far cry from standards-based, Internet-connected technology increasingly in use by other providers. Decoupling image viewers from PACS systems puts radiologists one step closer to modern workflows. Variously called an enterprise viewer, universal viewer or archive-neutral viewer, a stand-alone, standards-based image viewing application provides a single tool that both radiologists and referring physicians can use to access and interpret patient images no matter what their modality or source. Such viewers allow radiologists to do their work from a single system instead of ‘swiveling’ between workstations. They are also easier to update, adapt to new standards and port to mobile platforms, allowing radiologists to join in the movement of healthcare IT to mobile devices.

Joining the Digital Flow of Patient Information
For many years, radiology led healthcare in the use of digital technology but with healthcare becoming increasingly digital, patient images are now only one element in a sea of electronic patient data. The rapid adoption of electronic medical records (EMRs) has increased demand for open access to all types of patient data, including images. Meeting this need requires image archives and viewers that are vendor-, department- and modality-agnostic. VNAs and enterprise viewers, two deconstructed PACS components, enable both the implementation of centralized locations for images and provider access to them on an as-needed basis.

Care Coordination Across Campus and Across the Country
Modern healthcare workflows include care teams with members located in different healthcare systems, states and even countries. To support communication between geographically dispersed providers, image access has to be simple, fast and easy. Again, VNAs and enterprise viewers provide the right solution for sharing patient images safely and securely. Instead of providing multiple access points to multiple PACS, IT departments can secure a single access point to a VNA for remote access. At the other end, providers using an enterprise viewer don’t have to worry about having the “right” application to view an image. With a standards-based, enterprise viewer, a provider with the appropriate permissions can gain secure access to patient images.

Deconstructed PACS brings radiology into the mainstream of modern health IT. Enterprise viewers that can access all images, regardless of what PACS they come from, can even sidestep the need for VNAs.