While congressional Republicans and President Donald Trump have been seeking major cuts in federal funding of Medicaid, 26 states this year expanded or enhanced benefits and at least 17 plan to do so next year, according to a report released Thursday.

The increased benefits were largely for mental health and substance abuse treatment, but states also added telemedicine and dental care, according to the report by the Kaiser Family Foundation and the National Association of Medicaid Directors. (Kaiser Health News is an editorially independent program of the foundation.)

The number of states adding benefits was the highest in at least a decade, according to the 50-state survey. Last year, 21 states expanded benefits.

Oregon last year became the first state to provide coverage for oral contraceptives prescribed by a pharmacist, rather than a doctor, with its Medicaid program, the report says.

Medicaid, the state-federal health insurance program for the poor, covers nearly 75 million people and is one of the largest programs in state budgets. States generally add benefits to Medicaid during strong economic times.

States added the benefits while Congress debated making significant changes to the program, including ending the open-ended federal spending that has been a staple of the program since its beginning in 1966. The Republican efforts, including  bills to replace the Affordable Care Act, have withered after stiff opposition from advocates and Democrats and three moderate Republicans in the Senate.

Medicaid also faces uncertainty as the Trump administration weighs whether to allow states for the first time to require non-disabled, adult enrollees to work in order to qualify for benefits. At least six states have such a request pending with the Centers for Medicare & Medicaid Services, and a decision is expected before end of the year.

Robin Rudowitz, associate director for the Kaiser Family Foundation’s Program on Medicaid and the Uninsured, says states are adding benefits to respond to the national opioid abuse problem as well as to continue the trend to give enrollees who are elderly or have serious health problems the ability to remain in their homes longer instead of going to nursing homes. She says more states have been expanding benefits for several years coming out of the Great Recession, which ended in 2009.

“We are seeing the delayed effects of the improving economy — enrollment growth is going down … and states are increasing provider [reimbursement] rates and restoring and adding benefits,” she says.

Even while Maine, Indiana, Kentucky and other states want to add an adult work requirement to Medicaid, which will make it harder for some people to qualify, some of these same states and others are enhancing benefits, she says. 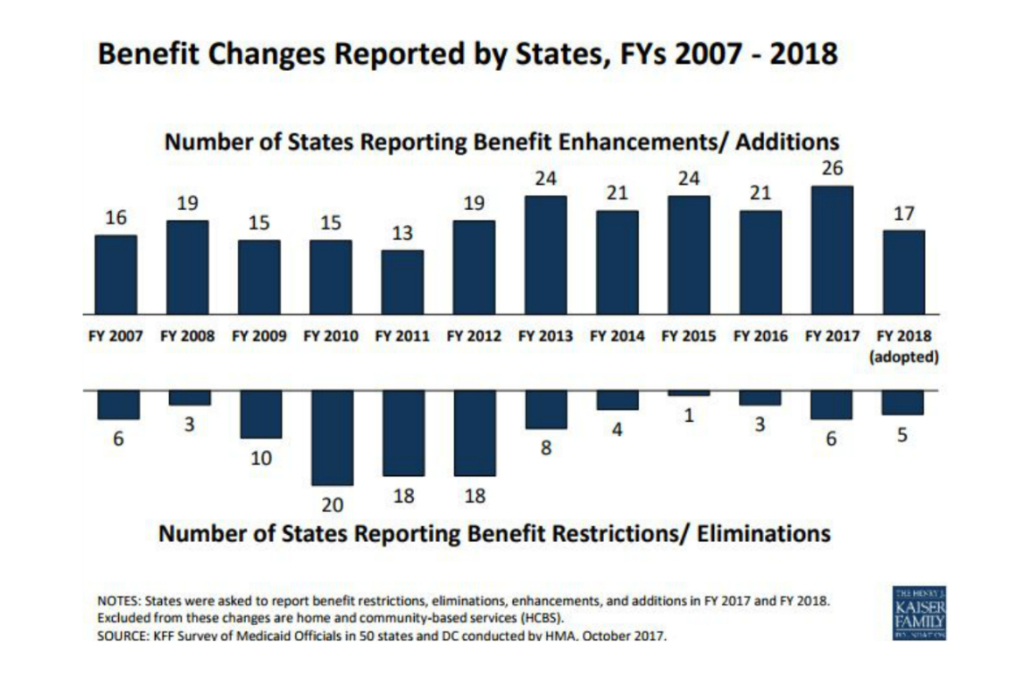 “All of this is happening against a backdrop of major uncertainty about what is going to happen at the federal level,” Rudowitz says.

After three years of supersized enrollment growth that peaked in 2015 as a result of most states expanding coverage under the ACA, Medicaid enrollment growth slowed to 2.7 percent nationally in fiscal year 2017, which ended Sept. 30, down from 3.9 percent the year before, according to a second Kaiser report also released Thursday.

Overall Medicaid spending increased 3.9 percent in 2017, up from 3.5 percent in 2016. States reported that increase reflected higher spending on such things as prescription drugs and long-term care services.

The states’ share of Medicaid spending grew by 3.5 percent also in 2017 but is expected to go up 6 percent in 2018. That increase is mostly a result of states starting to pay 5 percent of the cost of new enrollees covered under the ACA expansion. The federal government paid the full costs for those enrollees through 2016.

The survey was prepared by Health Management Associates.

This story was produced by Kaiser Health News.