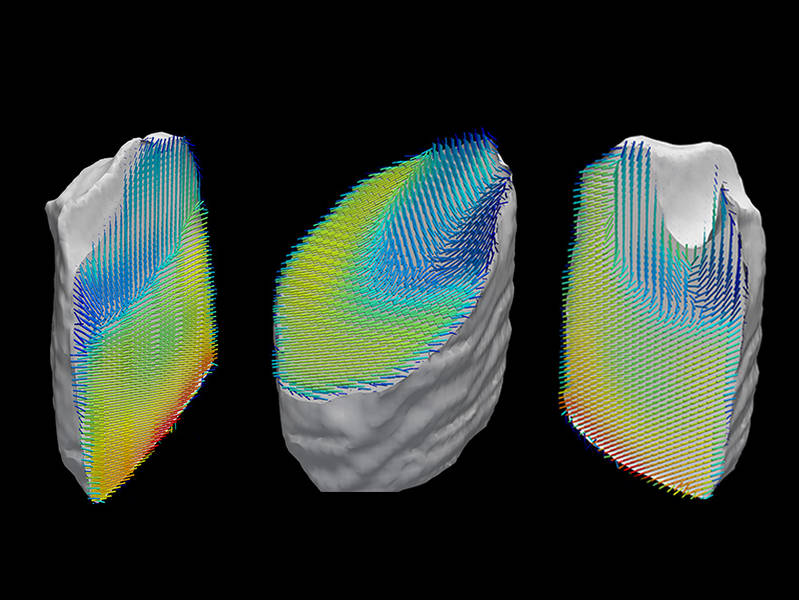 Representation of the orientation of collagen fibers within a tooth sample. The sample’s three-dimensional nanostructure was computed from a large number of separate images recorded by X-ray scattering CT. (Credit: Schaff et al. / Nature)

Both in materials science and in biomedical research it is important to be able to view minute nanostructures, for example in carbon-fiber materials and bones. A team from the Technical University of Munich (TUM), the University of Lund, Charité hospital in Berlin and the Paul Scherrer Institute (PSI) have now developed a new computed tomography method based on the scattering, rather than on the absorption, of X-rays. The technique makes it possible for the first time to visualize nanostructures in objects measuring just a few millimeters, allowing the researchers to view the precise three-dimensional structure of collagen fibers in a piece of human tooth.

In principle, X-ray computed tomography (CT) has been around since the 1960s: X-ray images are taken of an object from various directions, and a computer then uses the individual images to generate a three-dimensional image of the object. Contrast is produced by the differential absorption of X-rays in dissimilar materials. However, the new method, which was developed by Franz Pfeiffer, professor for Biomedical Physics at TUM and his team utilizes the scattering of X-rays rather than their absorption. The results have now been published in the journal Nature.

Scattering Provides Detailed Images of Nanostructures
Theoretically, X-rays act like light with a very short wavelength. This principle lies at the heart of the new method: When a light is shone on a structured object, for example a CD, the reflected light produces a characteristic rainbow pattern. Although the fine grooves in the CD cannot be seen directly, the diffraction of the light rays – known as scattering – indirectly reveals the structure of the object.

The same effect can be observed with X-rays, and it is this phenomenon that the researchers take advantage of in their new technique. The advantage of X-rays over visible light is that they are able to penetrate into materials, thus providing detailed information about the internal structure of objects. The researchers have now combined this three-dimensional information from scattered X-rays with computed tomography (CT).

Conventional CT methods calculate exactly one value, known as a voxel, for each three-dimensional image point within an object. The new technique assigns multiple values to each voxel, as the scattered light arrives from various directions. “Thanks to this additional information, we’re able to learn a great deal more about the nanostructure of an object than with conventional CT methods. By indirectly measuring scattered X-rays, we can now visualize minute structures that are too small for direct spatial resolution,” Franz Pfeiffer explains.

Internal View of a Tooth
For demonstration purposes the scientists examined a piece of human tooth measuring around three millimeters. A large part of a human tooth is made from the substance dentin. It consists largely of mineralized collagen fibers whose structure is largely responsible for the mechanical properties of the tooth. The scientists have now visualized these tiny fiber networks.

A total of 1.4 million scatter images were taken, with the scattered light arriving from various directions. The individual images were then processed using a specially devised algorithm that builds up a complete reconstruction of the three-dimensional distribution of the scattered rays step by step. “Our algorithm calculates the precise direction of the scatter information for each image and then forms groups having the same scatter direction. This allows internal structures to be precisely reconstructed,” says Martin Bech, former postdoc at the TUM and now assistant professor at the University of Lund.

Using this method, it was possible to clearly view the three-dimensional orientation of the collagen fibers within a sample of this size for the first time. The results are in agreement with knowledge previously obtained about the structures from thin sections. “A sophisticated CT method is still more suitable for examining large objects. However, our new method makes it possible to visualize structures in the nanometer range in millimeter-sized objects at this level of precision for the first time,” says Florian Schaff, lead author of the paper.