Avast amount of our understanding of the brain comes from inserting tiny metal wires to eavesdrop on the electrical activity generated by neurons. This technique, known as extracellular electrophysiology, is becoming more powerful as the latest silicon microfabrication processes allow engineers to pack more wires into smaller probes. The latest generation of silicon probes, developed by Imec (Leuven, Belgium), use CMOS technology to fit 384 recording sites onto a shank that’s thinner than a human hair.

To maximize the amount of useful information that can be extracted from these probes, they must be positioned with a high degree of accuracy. Individual brain areas are small, sometimes only tens of microns in diameter, and must be targeted precisely across multiple experiments. In addition, it is often desirable to use multiple probes simultaneously to observe the interactions between neurons in different parts of the brain. Each probe must be moved independently to minimize damage to delicate brain tissue.

In 2015, Dr. Josh Siegle of the Allen Institute for Brain Science started development of a new experimental rig capable of inserting five Imec probes (with a combined total of 1920 electrodes) into the brain simultaneously.

“We needed a practical solution for multi-probe, simultaneous measurements of interactions among neurons distributed throughout the brain,” Siegle explained. “Many very interesting scientific questions can be investigated using this new method of simultaneous recording.”

Siegle is highly experienced in developing tools for neuroscience research. As a co-founder of the nonprofit organization Open Ephys, he is a leading member of a community of neuroscientists dedicated to sharing open-source, fi eld-tested software and hardware for electrophysiology research.

For the new advanced rig, Siegle needed compact, high-precision micro manipulators to move each probe in three axes (X, Y, and Z). He needed them to be very small to maintain a clear field of view in front of the mouse. This allowed him to record neural activity as the awake animal responded to visual stimuli.

The X and Y axes are used to move the probe tip outside the brain under visual microscope control. The Z axis is used to slowly insert the probe to a precise depth in the brain while monitoring the electrical measurements. Recording begins when the proper location is reached. 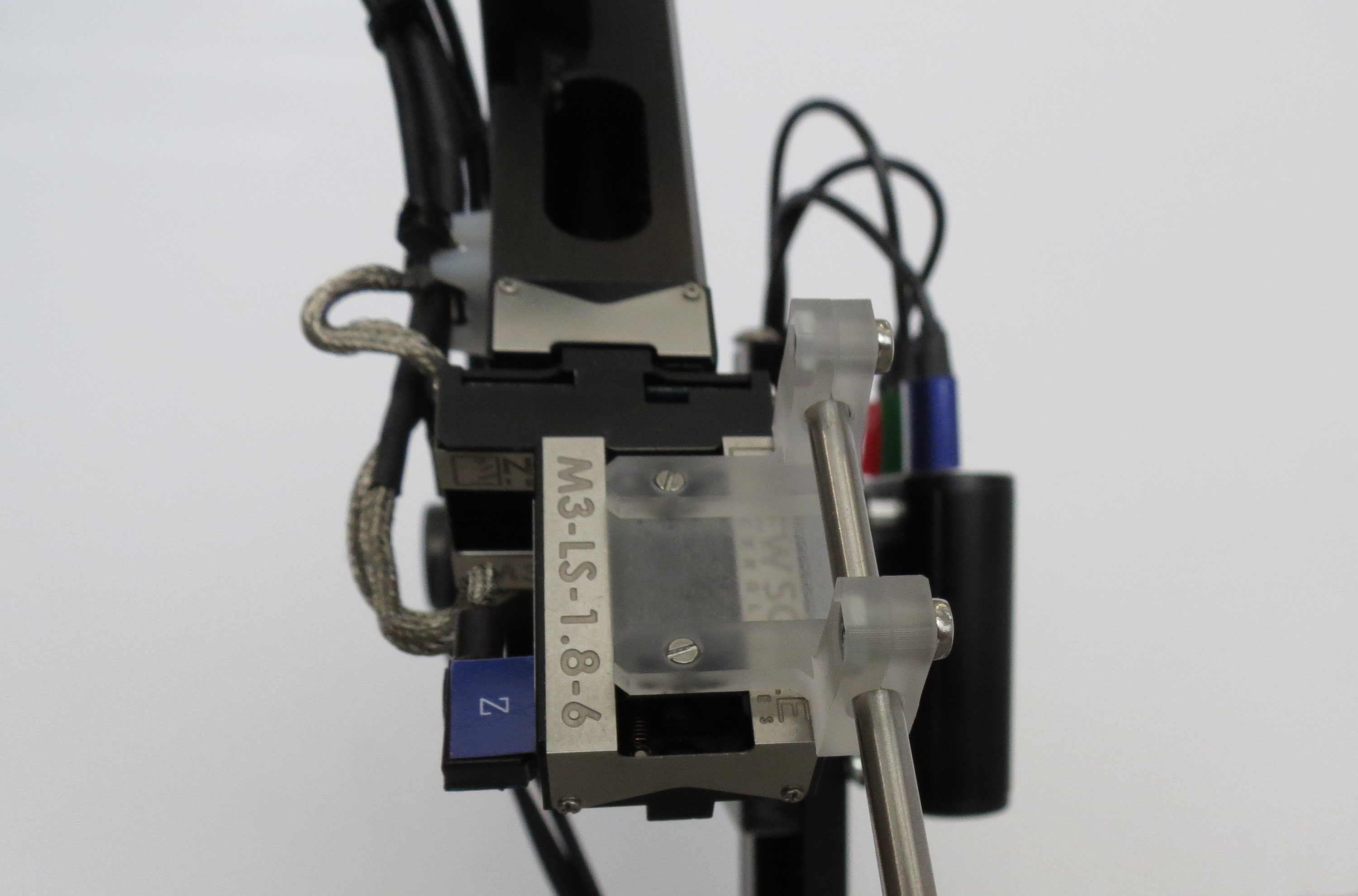 A close-up of the motorized stages. (Credit: David Henderson)

In the first-generation rig, each stage assembly was supported by an infi nitely-adjustable arm manufactured by Noga Engineering Ltd. The arm is used to place the probe at the proper angle and initial location within six millimeters of the final target location above the mouse. The final probe locations were commanded from a PC by operating the 15 motorized stages from a single Python API connected to an Arduino board that generates the ASCII commands to the SPI interface to each stage.

This was made possible by the embedded drive and control electronics within each stage.

“Having the controllers embedded in the stage was helpful in getting the set up operating quickly,” Siegle said. “The real advantage comes when multiple (especially three or more) probes need to be inserted independently, since the stages are compact enough to be squeezed together in a very tight space.” 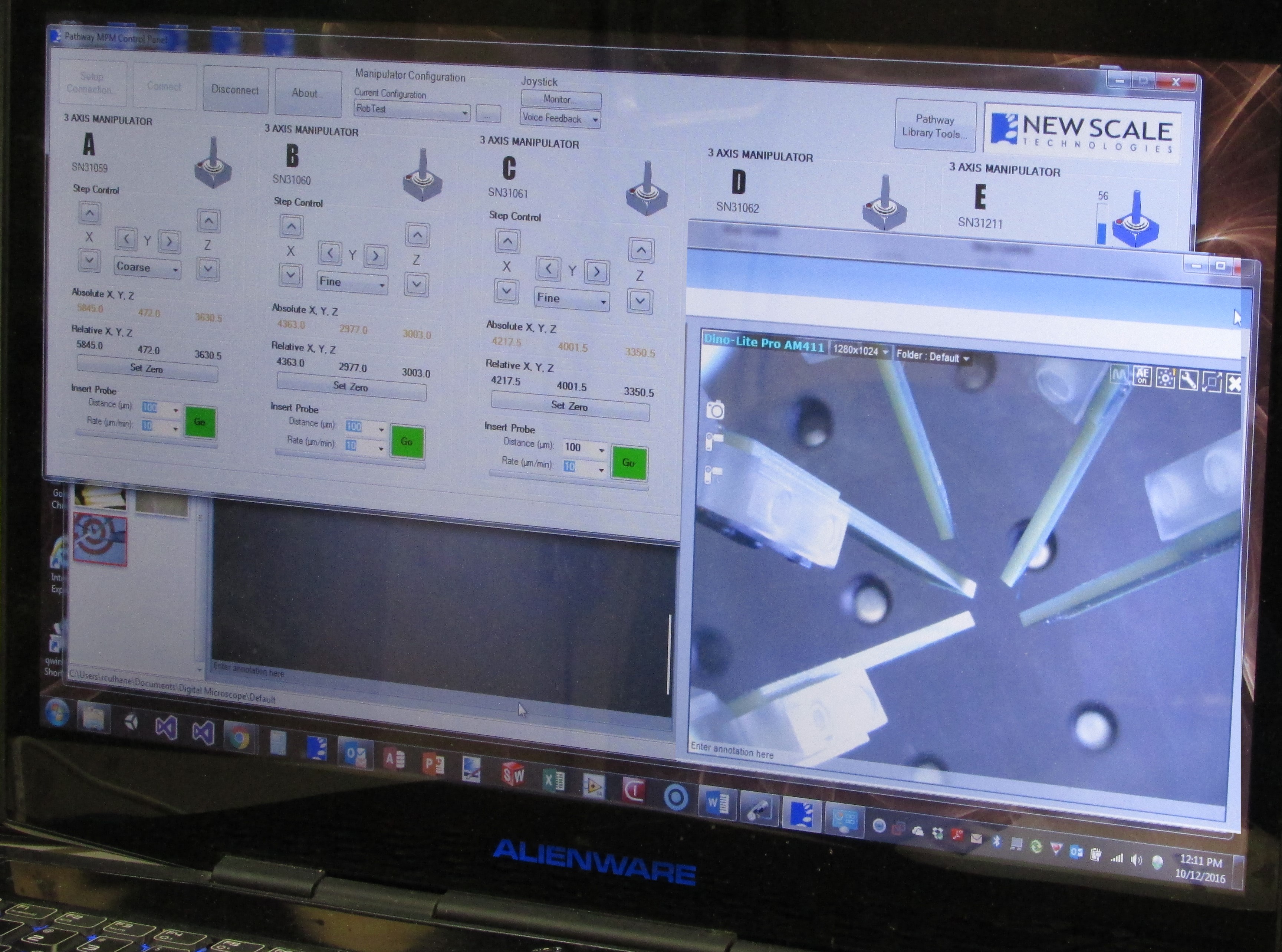 Each M3-LS Linear Smart Stage has an integrated SQUIGGLE™ micro motor, piezo motor driver, position sensor and closed-loop control electronics embedded within the 29 x 20 x 9.5 mm stage assembly. It has six millimeters of travel with absolute position resolution of 0.5 micrometers, operates on 3.3 VDC and holds position with no power.

In 2016, the engineering team at New Scale Technologies started working with Siegle to create a second-generation rig for the larger neuroscience community. The changes emphasize modularity, easier installation, and ergonomic operation. They replaced the stages’ flex cables with smaller and more flexible cables and standard connectors that plug into a USB converter. Five USB cables (one for each XYZ manipulator) are silicon probe, facilitating pre-adjustment of the four-DOF arm locations, angles, and stops. The fragile silicon probe is installed after pre-adjustment. 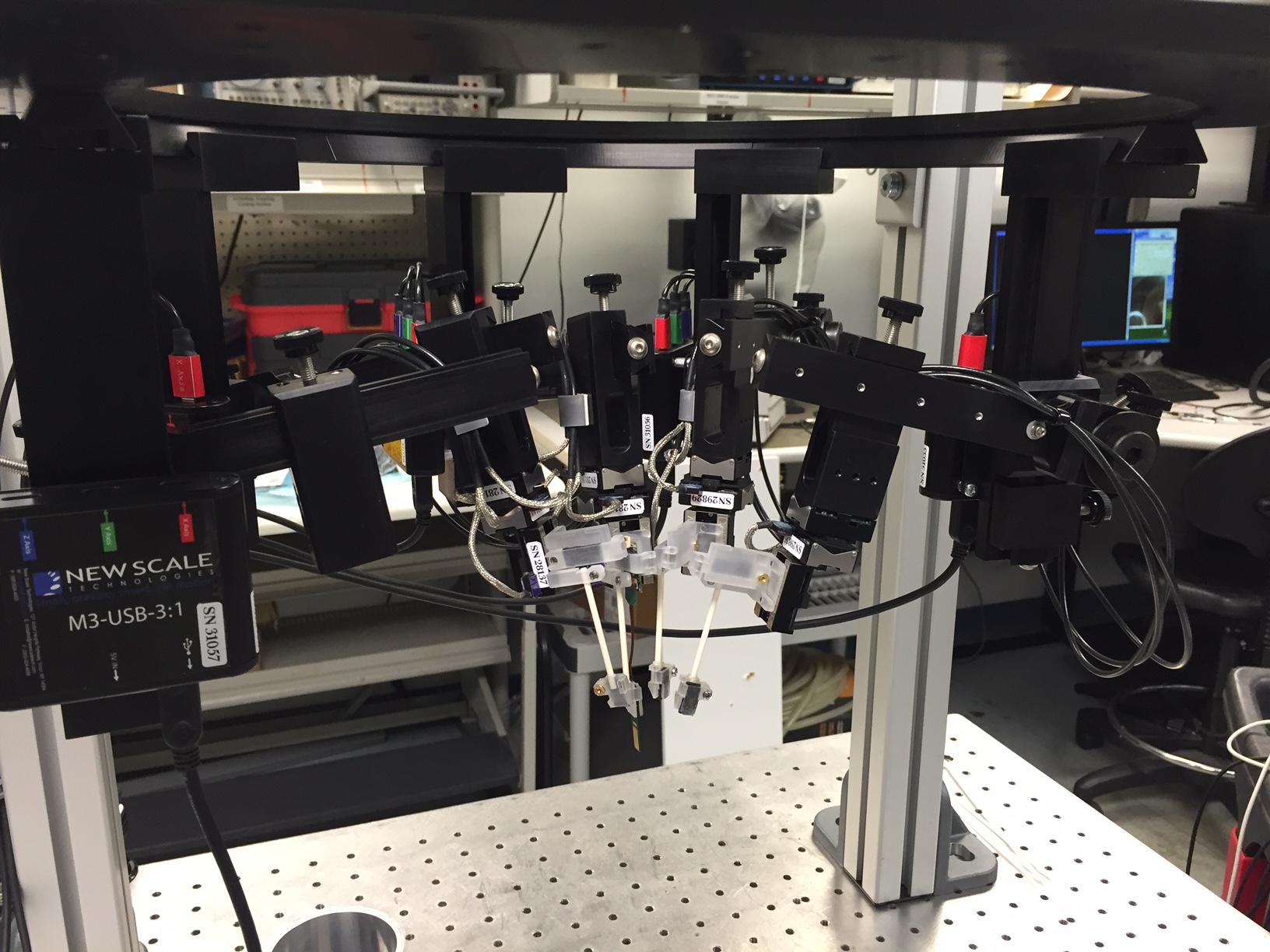 A close-up of the motorized stages. (Credit: David Henderson)

The rapid development of this project demonstrates the benefits of instrument design teams working closely with researchers in creating laboratory systems.

“We had good communication on both ends to create a breakthrough research tool using embedded motion modules,” Siegle said. “It was an easy process, working with motion experts who listened to all our specs and turned around prototypes quickly. Together we were able to rapidly convert advanced science requirements into a multi-axis motion system that meets the needs of many neuroscience labs.”

Now that the multi-probe insertion system has proven itself, Siegle plans to integrate New Scale micromanipulators into a rig designed for “production” data collection: highly standardized, high-throughput experiments unique to the Allen Institute.

Over the next year, Siegle and the Institute’s in-house engineering team will collaborate with New Scale to produce three production rigs, each with six XYZ stages capable of targeting Imec probes to different parts of the mouse visual system. The Institute is currently collecting a large-scale database of neural activity recorded via two-photon imaging. The electrophysiology data will complement the imaging data by providing millisecond-resolution recordings from multiple areas simultaneously. All data will be shared with the neuroscience community through the Allen Institute’s website, http://www.brain-map.org.

New Scale will continue to improve its MPM system by integrating new XYZ stages with longer travel distance and higher load capacity, additional options for user control (such as an input device with a separate knob for each axis), and software that allows all of the probes to move along the same global axes. These upgrades will make the system more user-friendly and applicable to a wider range of experiments that require precise positioning of electrodes and optical components for neural recording and stimulation.