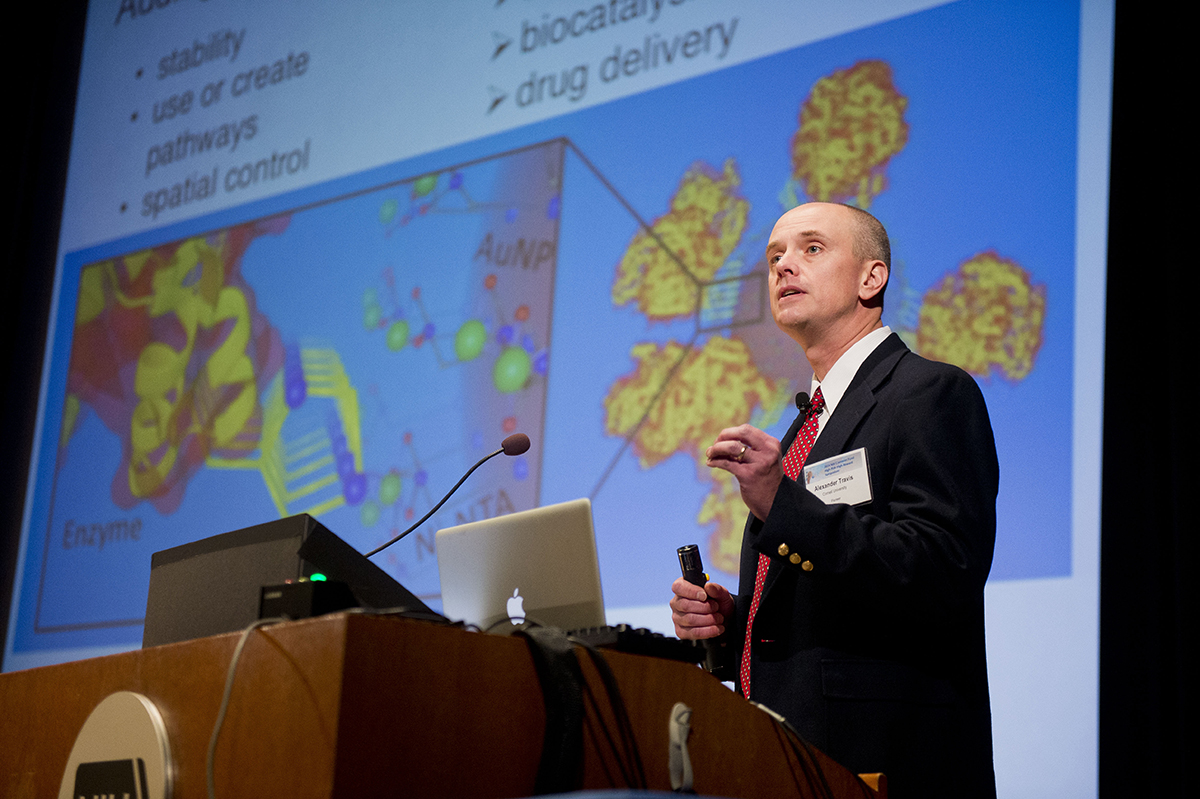 Alex Travis, associate professor at the Baker Institute for Animal Health, co-authored the study that led to the development of a new stroke diagnosis tool.

Minutes count when treating stroke, but current diagnostics take as long as three hours, careful lab work and skilled technicians to arrive at a conclusive diagnosis. Scientists at Cornell’s Baker Institute for Animal Health have developed a device that helps diagnose stroke in less than 10 minutes using a drop of blood barely big enough to moisten your fingertip.

Having demonstrated proof of principle, the technology eventually could be expanded and used in point-of-care testing devices to diagnose other conditions in humans and animals, including traumatic brain injury (concussion), some forms of dementia, and even some types of cancer and heart disease. The study appears in the Nov. 25 issue of the journal PLOS ONE.

The study’s lead author, Roy Cohen, a research scientist at the Baker Institute, says the technology represents the successful pairing of two big goals in medical diagnostics – small size and simplicity, a combination that means testing could be carried out at a patient’s bedside.

“Three-quarters of stroke patients suffer from ischemic stroke – a blockage of a blood vessel in the brain. In those cases, time is of the essence, because there is a good drug available, but for a successful outcome it has to be given within three or four hours after the onset of symptoms,” says Cohen. “By the time someone identifies the symptoms, gets to the hospital and sits in the emergency room, you don’t have much time to obtain the full benefit of this drug.” Enhancing the speed of diagnosis could save many people from suffering lasting effects of ischemic stroke, he says.

To diagnose stroke, a condition in which blood flow to an area of the brain is limited or cut off, the technology will one day detect several bloodborne biomarkers, molecules that appear in the blood when the stroke occurs. The technology uses enzymes attached to nanoparticles to detect the biomarker molecules and convert that detection into light.

To demonstrate the effectiveness of this new approach, the researchers focused on the biomarker neuron-specific enolase (NSE), a substance found in higher concentrations in the blood of victims of stroke and other conditions. By measuring the amount of light produced from various samples, Cohen and his colleagues can determine the concentration of NSE in the sample. At each step of the way, the signal from the NSE is amplified, so even minute quantities give off enough light for detection.

The idea to tether the enzymes, says co-author Alex Travis, associate professor of reproductive biology at the Baker Institute for Animal Health, came from the hardworking enzymes tethered to the shafts of sperm tails. These sperm enzymes efficiently turn sugars into energy that powers the flagellum and moves the sperm along. The fact that they’re attached to the sperm tail instead of floating around in solution enables the enzymes to efficiently pass the substrate along from point to point and get the most “bang for the buck” from a sugar molecule, according to Travis.

Going forward, Travis and his team will collaborate with a private company to develop the stroke-detecting technique for clinical testing and eventually make it available for use in hospitals. But he’s also excited to expand the system to diagnose other conditions.

“This system could be tailored to detect multiple biomarkers,” says Travis. “That’s the strength of the technique. You could assemble a microfluidic card based on this technology that could detect 10 biomarkers in different wells, and the readout would be the same for each one: light.” Using the same detection system for multiple different biomarkers would make for a simple system in a relatively small package, he says.

For now, Cohen says, they’re experimenting with using the system to detect traumatic brain injury among mixed martial arts athletes. The early results of this work have been promising, he says, and he hopes to report on them soon.