Initial successes in disrupting the blood-brain barrier (BBB) with the use of ultrasound was reported in a scientific paper published in Science Translational Medicine, which credited teams from the Assistance Publique-Hôpitaux de Paris (the Greater Paris University Hospital) and the Pierre and Marie Curie University.France-based CarThera, designer of ultrasound-based medical devices to treat brain disorders, developed the SonoCloud medical device that was used in the research. The device is capable of emitting ultrasound on demand to achieve temporary permeability of the blood vessels in the brain, with the aim of increasing the delivery of therapeutic molecules.

Making the blood vessels in the brain temporarily permeable with the use of ultrasound allows for increased delivery of therapeutic molecules – including chemotherapy drugs, which generally have little brain penetration. First achieved at the Pitié-Salpêtrière Hospital in Paris, experts say this paves the way for major therapeutic possibilities not only for brain cancers, but also for neuro-degenerative diseases such as Alzheimer’s, in which effective molecules have so far been unable to penetrate the brain. 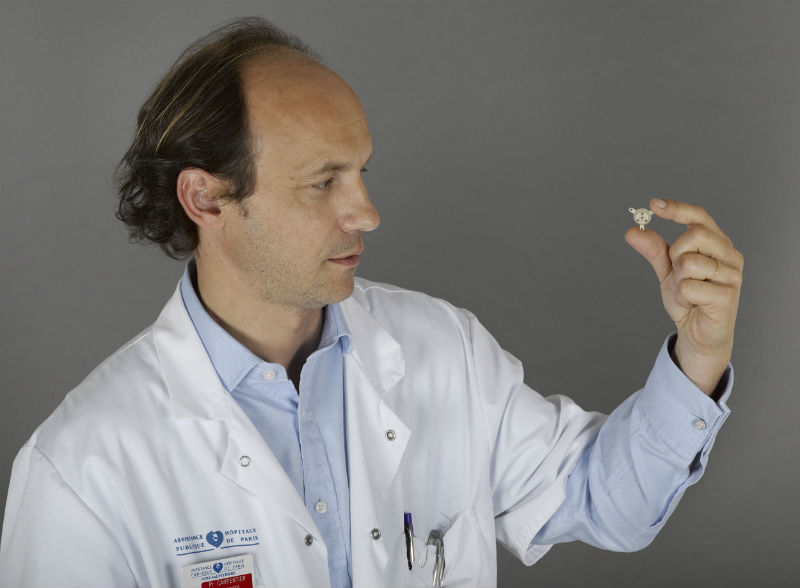 Alexandre Carpentier, the inventor of the SonoCloud device, called the blood-brain barrier one of the last major frontiers of neuroscience. (Photo credits: CarThera)

The article, “Clinical Trial of Blood-Brain Barrier Disruption By Pulsed Ultrasound,” reported the preliminary results in the first 15 patients included since July 2014 in a phase 1/2a clinical trial in relapsing glioblastoma (aggressive malignant brain tumors).

The aim of the trial was to increase the permeability of the blood vessels of the brain by transiently opening the blood-brain barrier. Increasing the permeability of the BBB with SonoCloud improves the delivery of intravenously infused chemotherapy drugs into the brain. The device’s tolerability and safety profile is good, since it uses low intensity ultrasound similar to a diagnostic or imaging level.

“The publication of this scientific paper supports the SonoCloud concept (and) it will allow us to start working on subsequent clinical developments with a view to marketing the device,” Frédéric Sottilini, CEO of CarThera, said. “We plan to raise money in 2017 to fund a large-scale phase 2b/3 clinical trial in 200 patients, with centers in Europe and the U.S.”

He added that SonoCloud, with anticipated CE marking and FDA approval, could be commercially available in 2020 for use in recurrent glioblastoma. Meanwhile, the company plans to carry out exploratory studies in other indications, including Alzheimer’s disease.

According to the company’s estimates, 250,000 patients worldwide are diagnosed with a brain tumor each year. More than 160,000 of them could benefit from the ultrasound procedure, especially those with primary brain cancers and some brain metastases of other cancers. It represents a market worth €1.5 billion ($1.7 billion).

Alexandre Carpentier, the inventor of the SonoCloud device, called the blood-brain barrier one of the last major frontiers of neuroscience. Carpentier, founder of  CarThera, is a neurosurgeon at Pitié-Salpêtrière Hospital.