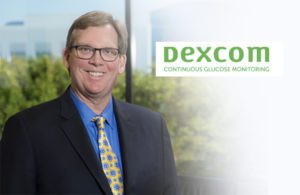 Could in-hospital use of continuous glucose monitors become a new normal after the COVID-19 pandemic? Dexcom CEO Kevin Sayer thinks so.

As the pandemic ramped up in March, FDA issued temporary guidance allowing increased remote monitoring of hospital patients in order to limit contact with hospital staff. The guidance included CGMs made by companies such as Dexcom (NSDQ:DXCM) and Abbott (NYSE:ABT).

Preliminary data suggest that CGMs helped, according to Sayer, who spoke with MassDevice today as part of a virtual version of the American Diabetes Association’s annual Scientific Sessions. (Hear some clips during our DeviceTalks Weekly podcast at the end of the week.) Diabetic hospital patients got off insulin drips faster and even got discharged faster when using Dexcom CGMs, according to preliminary data gathered by the San Diego–based company.

Get the full story on our sister site MassDevice.

And check out more highlights of the ADA Scientific sessions here.