People with this form of diabetes can’t make their own insulin and require regular insulin injections to control their blood sugar. The new discovery suggests a personalized treatment approach to diabetes may be on the horizon — one that relies on the patients’ own stem cells to manufacture new cells that make insulin.

The researchers showed that the new cells could produce insulin when they encountered sugar. The scientists tested the cells in culture and in mice, and in both cases found that the cells secreted insulin in response to glucose.

The research is published May 10 in the journal Nature Communications. 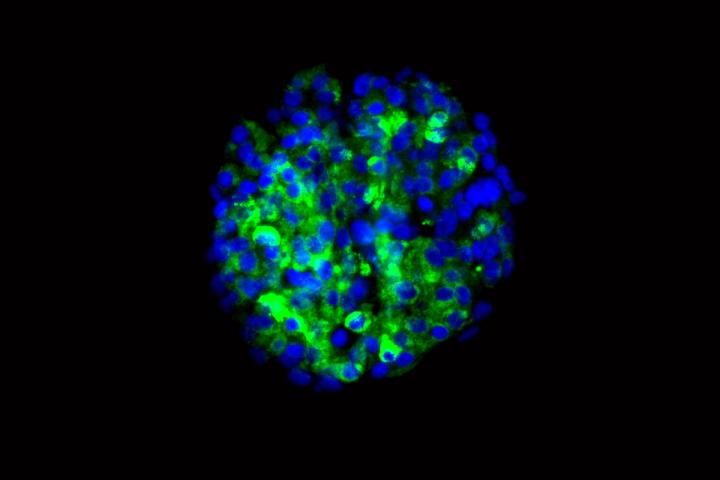 Researchers have produced insulin-secreting cells from stem cells derived from the skin of patients with type 1 diabetes. The cells (blue), made from stem cells, can secrete insulin (green) in response to glucose. (Credit: Millman Laboratory)

“In theory, if we could replace the damaged cells in these individuals with new pancreatic beta cells — whose primary function is to store and release insulin to control blood glucose — patients with type 1 diabetes wouldn’t need insulin shots anymore,” said first author Jeffrey R. Millman, PhD, an assistant professor of medicine and of biomedical engineering at Washington University School of Medicine. “The cells we’ve manufactured sense the presence of glucose and secrete insulin in response. And beta cells do a much better job controlling blood sugar than diabetic patients can.”

Millman, whose laboratory is in the Division of Endocrinology, Metabolism and Lipid Research, began his research while working in the laboratory of Douglas A. Melton, PhD, Howard Hughes Medical Institute investigator and a co-director of Harvard’s Stem Cell Institute. There, Millman had used similar techniques to make beta cells from stem cells derived from people who did not have diabetes. In these new experiments, the beta cells came from tissue taken from the skin of diabetes patients.

“There had been questions about whether we could make these cells from people with type 1 diabetes,” Millman explained. “Some scientists thought that because the tissue would be coming from diabetes patients, there might be defects to prevent us from helping the stem cells differentiate into beta cells. It turns out that’s not the case.”

Millman said more research is needed to make sure that the beta cells made from patient-derived stem cells don’t cause tumors to develop — a problem that has surfaced in some stem cell research — but there has been no evidence of tumors in the mouse studies, even up to a year after the cells were implanted.

He said the stem cell-derived beta cells could be ready for human research in three to five years. At that time, Millman expects the cells would be implanted under the skin of diabetes patients in a minimally invasive surgical procedure that would allow the beta cells access to a patient’s blood supply. 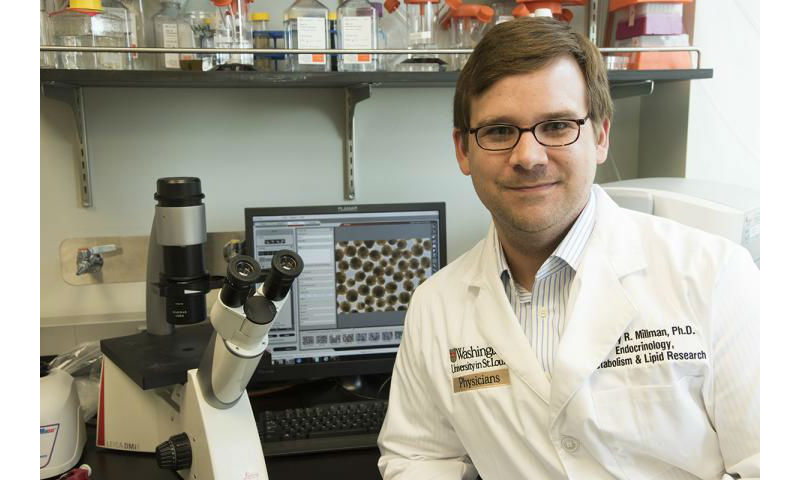 Jeffrey R. Millman, PhD, and his colleagues have taken stem cells from the skin of patients with type 1 diabetes and coaxed those cells to differentiate into clusters of insulin-secreting beta islet cells (seen on the computer monitor). (Credit: Robert Boston)

“What we’re envisioning is an outpatient procedure in which some sort of device filled with the cells would be placed just beneath the skin,” he said.

The idea of replacing beta cells isn’t new. More than two decades ago, Washington University researchers Paul E. Lacy, MD, PhD, now deceased, and David W. Scharp, MD, began transplanting such cells into patients with type 1 diabetes. Still today, patients in several clinical trials have been given beta cell transplants with some success. However, those cells come from pancreas tissue provided by organ donors. As with all types of organ donation, the need for islet beta cells for people with type 1 diabetes greatly exceeds their availability.

Millman said that the new technique also could be used in other ways. Since these experiments have proven it’s possible to make beta cells from the tissue of patients with type 1 diabetes, it’s likely the technique also would work in patients with other forms of the disease — including type 2 diabetes, neonatal diabetes and Wolfram syndrome. Then it would be possible to test the effects of diabetes drugs on the beta cells of patients with various forms of the disease.