Fungal infections are a serious problem in modern health care. A critical factor in their successful treatment is time: the faster they are detected, the more effectively dangerous infections can be prevented. At the Institute of Physical Chemistry of the Polish Academy of Sciences in Warsaw a chemical sensor has been devised enabling the detection time of fungi to be shortened from the current couple of days to just a few minutes.

When it comes down to it, nearly every one of us is a walking time bomb for ourselves. Almost half the population — and practically all medical personnel — are carriers of Candida fungus. These yeasts live in a delicate balance with our organisms, on the mucous membranes of the digestive tract and the urogenital system as well as the skin. But when this balance is disturbed, fungi begin expansive uncontrolled colonization. In extreme cases, rapidly developing infection can lead to a patient’s death in just a few days. Meanwhile, at present, standard tests for the presence of fungi in a patient’s body fluids take at least a dozen or so hours, and the results may be false positive or false negative. In the near future, physicians will have the chance to react much more rapidly and certainly with the appropriate antifungal therapy — thanks to the sensor devised at the Institute of Physical Chemistry of the Polish Academy of Sciences (IPC PAS) in Warsaw. 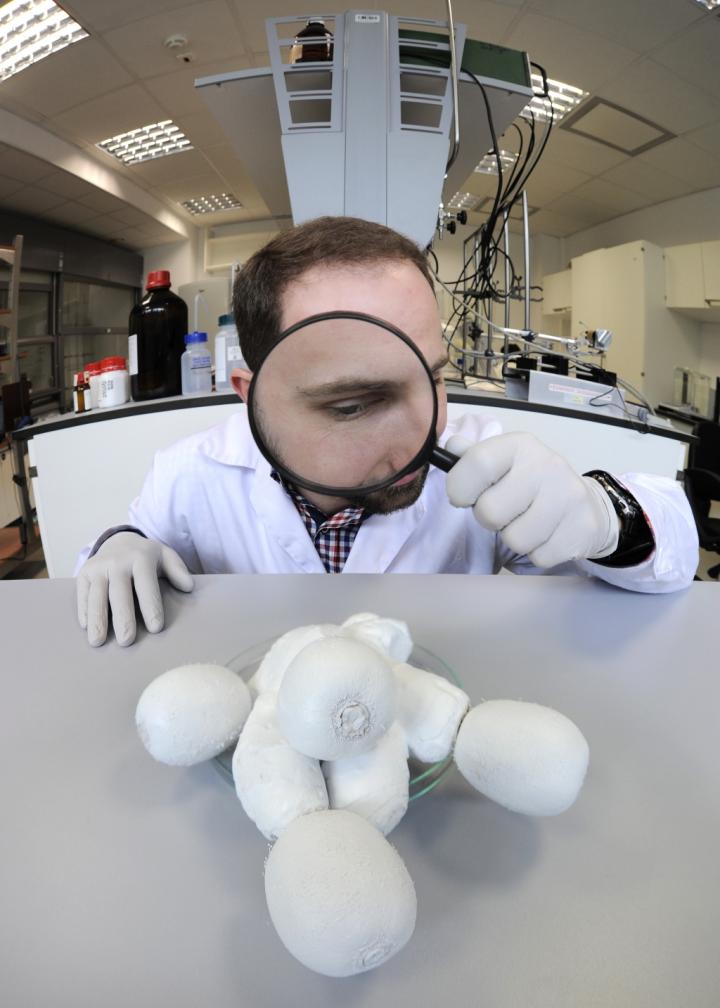 How to detect fungi? A fast method of detection of fungal infections has been developed at the Institute of Physical Chemistry of the Polish Academy of Sciences in Warsaw, Poland (Credit: IPC PAS, Grzegorz Krzyzewski)

“The most important element of our sensor is a film of polymer selectively recognizing D-arabitol. It captures molecules of D-arabitol, a compound indicating the presence of fungi. The measurement takes only a few minutes, and the D-arabitol is detected with a high degree of certainty even in the presence of interfering substances with a similar molecular structure,” says Prof. Wlodzimierz Kutner (IPC PAS).

The number of fungal infections is expected to steadily increase over the coming decades. These infections develop particularly frequently in people with impaired immunity, that is, in patients (especially those receiving immunosuppressive therapy or chemotherapy), and the elderly, whose percentage share in the community continues to grow. Appropriately early diagnosis takes on a key role here, the less troublesome it is for the patient, the more frequently and more quickly carried out — the better. Yeasts, unlike bacteria that can be combated by antibiotics, are eukaryotes, and so just like human cells they have cell nuclei and from a molecular (biochemical) point of view, they are very similar. Substances that are harmful to fungi therefore create havoc not only amongst fungi but also in the human cells. For this reason, drugs must be administered early, when the fungus is just beginning its conquest of the body. Unfortunately, at the initial stage of development of fungal disease, it is currently rarely possible to establish its true cause.

One of the markers of fungal disease is arabitol, a simple sugar alcohol. This compound occurs naturally in mammalian cells, where it is produced in two forms which are mirror images (enantiomers). In healthy humans these forms, known as D-arabitol and L-arabitol, are formed in roughly the same amounts. However, cells of Candida species produce only D-arabitol. The relative increase in the concentration of this enantiomer in body fluids can therefore herald infection.

D-arabitol can be detected in cerebrospinal fluid (CSF), plasma, and urine. From the diagnostic point of view, the best solution is the measurement of its concentration in urine. The test is then completely non-invasive and can be performed without any risk to even a newborn baby or a very ill person.

“The key — and I mean this almost literally! — stage of devising of the sensor was to construct a polymer with molecular cavities of the appropriate shape and locations selectively recognizing D-arabitol. In other words, we had to invent and build a molecular lock, which would only fit one key: the D-arabitol molecule. The task was not easy, because L-arabitol, xylitol, and ribitol are molecules that are very, very similar to each other,” explains PhD student Marcin Dabrowski (IPC PAS).

The polymer film with molecular cavities binding D-arabitol was prepared using the molecular imprinting technique. The process began by dissolving D-arabitol in acetonitrile. Then boric acid labeled with bithiophene, whose molecules bound to the D-arabitol in particular positions, was added to the solution. The bithiophene substituent permitted the electrochemical polymerization of the solution. A polymer film having a rigid structure was thus created, from which all that was needed was to rinse out the D-arabitol molecules to obtain a film with molecular cavities of the desired shape and properties.

The detection polymer films produced at the IPC PAS have a thickness of ca. 200 nanometers. They are deposited either on gold electrodes, or on quartz resonators. After immersing a sample taken from a patient in the solution, D-arabitol particles get stuck in the molecular cavities of the films and depending on the method of detection, either change the flow of current through a field-effect transistor having a gate connected to an electrode or the oscillation resonance frequency of a piezoelectric resonator.

“What is especially important here is the fact that the molecular cavities of our polymer do not capture molecules of other compounds that could generate false positive signals misleadingly indicating the presence of D-arabitol. The film is almost completely ‘deaf’ even to other isomers of arabitol, including those that differ from D-arabitol only by their optical properties,” stresses Dabrowski.

The chemical sensors constructed at the IPC PAS using the technique of molecular imprinting have simple construction suitable for repeated use, and their production is trouble-free and inexpensive. In the future, they can be used not only in hospitals or physicians’ offices, but even by patients themselves at home. Perhaps one day such sensors will be able to be installed in typical sanitary equipment. Analyses could then be carried out repeatedly during the day and in a completely non-invasive manner. One of the basic problems of modern medicine would then disappear: that of delayed diagnosis, carried out at the stage where, concerned about his symptoms, the patient himself sets out to consult a physician.