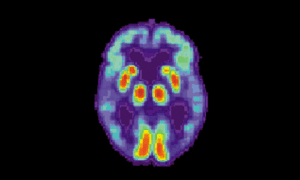 PET scan of the brain of a person with AD showing a loss of function in the temporal lobe. [Image from Wikipedia]

Yale Medicine researchers have used a new technique involving diamonds and PET scans to look for biomarkers of Alzheimer’s for early detection.

The researchers have used a technique called vibrational spectroscopy that involves using a light reflection off of a diamond core to confirm characteristics of Alzheimer’s in blood plasma. The technique was reported as being 90% effective when compared to other clinical diagnostic methods.

Vibrational spectroscopy could also differentiate between the blood from an Alzheimer’s patient and someone with Lewy Body dementia. The two conditions are usually difficult to tell the difference between because Lewy Body dementia has similar symptoms to other degenerative brain disorders.

“Its difficult to distinguish between the two clinically,” Dr. Christopher van Dyck, a psychiatrist at Yale Medicine and director of the Alzheimer’s Disease Research Unit, said in a press release.

An incorrect diagnosis can be dangerous as certain medications can cause neuroleptic sensitivity, irreversible parkinsonism or neuroleptic malignant syndrome.

Dr. van Dyck partnered with the PET imaging center at Yale Medicine to help use neuroimaging to detect early biomarkers of the disease, including the amyloid protein and tau tangles that cause Alzheimer’s. While looking the amyloids was approved by the FDA in 2012, a positive scan of the protein doesn’t necessarily mean that a patient has Alzheimer’s. However, a negative scan shows that the patient definitely does not have the disease.

Using a PET scan allows doctors to make a faster diagnosis, according to the researchers. If the disease is discovered early on, doctors can start to prescribe medications like cholinesterase inhibitors that generally help people who have mild to moderate Alzheimer’s disease. The drugs are designed to help delay some of the symptoms or prevent them from getting worse by preventing the brain from breaking down due to the protein build ups.

“Alzheimer’s causes progressive, irreversible brain damage. The earlier you catch it, the more effective our interventions will be,” said van Dyck.

The research was published in the journal Proceedings of the National Academy of Sciences.