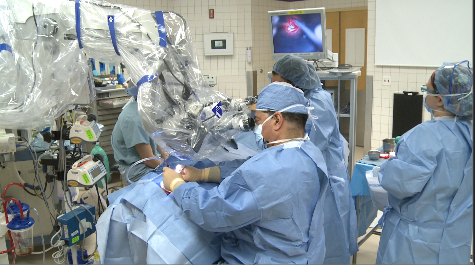 A new prosthesis for a traditional ear surgery is bringing hope to patients diagnosed with a hereditary disorder that causes hearing loss. After 63-year-old Diane Duncan was diagnosed with otosclerosis in her thirties, she transitioned into an isolated world where conversations with other people became limited, everyday noises like car engines running and cell phones ringing became almost inaudible.

Diane has conductive hearing loss – a type of condition where the ear drum and the bones in the middle of the ear (including the stapes bone) don’t vibrate properly. The most common form to affect adults is known as otosclerosis. Patients with otosclerosis have abnormal bone growth around the stapes bone. The stapes bone must move freely for the ear to work properly and for a person to hear well.

Typically doctors perform a stapedectomy to treat the condition. It involves removing part or all of the immobilized stapes bone and replacing it with a prosthetic device. The prosthetic device allows the bones in the middle ear to resume movement, which stimulates fluid in the inner ear, and improves or restores hearing.

Even though a stapedectomy has a 96 percent success rate, for Diane and patients like her, the surgery can sometimes fail months to years later. This happens because the bone the surgeon wrapped the prosthetic stapes on, the incus bone, has deteriorated making it very difficult for a surgeon to repair.

Cliff Megerian, MD, Chairman of the Department of Otolaryngology Head and Neck Surgery at University Hospitals Case Medical Center, offered Diane a new prosthesis he invented and took two years to develop. It uses a new compound metal that when heated, collapses and grips onto the applied surface. She is now the first person in the world to benefit from it.

“There are literally hundreds and hundreds, maybe even thousands of people in the country and around the world who have the exact same condition in the ear that she does,” says Dr. Megerian. “So this prosthesis design will be a solution for those folks around the world.”

Not only has the implant repaired the hearing in Diane’s right ear, but it has restored her sense of confidence and independence.

“All the little, like people walking by, the instruments, and talking to people, it’s like magic,” says Diane. “It was just like rebirth. I don’t mean to be overly dramatic but that’s how I feel about it. Every sound that I hear sounds wonderful.”