Massachusetts General Hospital (MGH) researchers have taken some initial steps toward the creation of bioengineered human hearts using donor hearts stripped of components that would generate an immune response and cardiac muscle cells generated from induced pluripotent stem cells (iPSCs), which could come from a potential recipient. The investigators described their accomplishments – which include developing an automated bioreactor system capable of supporting a whole human heart during the recellularization process – earlier this year in Circulation Research.

“Generating functional cardiac tissue involves meeting several challenges,” says Jacques Guyette, PhD, of the MGH Center for Regenerative Medicine (CRM), lead author of the report. “These include providing a structural scaffold that is able to support cardiac function, a supply of specialized cardiac cells, and a supportive environment in which cells can repopulate the scaffold to form mature tissue capable of handling complex cardiac functions.”

The research team is led by Harald Ott, MD, of the MGH CRM and the Department of Surgery, senior author of the paper. In 2008, Ott developed a procedure for stripping the living cells from a donor organ with a detergent solution and then repopulating the remaining extracellular matrix scaffold with organ-appropriate types of cells. Since then his team has used the approach to generate functional rat kidneys and lungs and has decellularized large-animal hearts, lungs and kidneys. This report is the first to conduct a detailed analysis of the matrix scaffold remaining after decellularization of whole human hearts, along with recellularization of the cardiac matrix in three-dimensional and whole-heart formats.

The study included 73 human hearts that had been donated through the New England Organ Bank, determined to be unsuitable for transplantation and recovered under research consent. Using a scaled-up version of the process originally developed in rat hearts, the team decellularized hearts from both brain-dead donors and from those who had undergone cardiac death. Detailed characterization of the remaining cardiac scaffolds confirmed a high retention of matrix proteins and structure free of cardiac cells, the preservation of coronary vascular and microvascular structures, as well as freedom from human leukocyte antigens that could induce rejection. There was little difference between the reactions of organs from the two donor groups to the complex decellularization process. 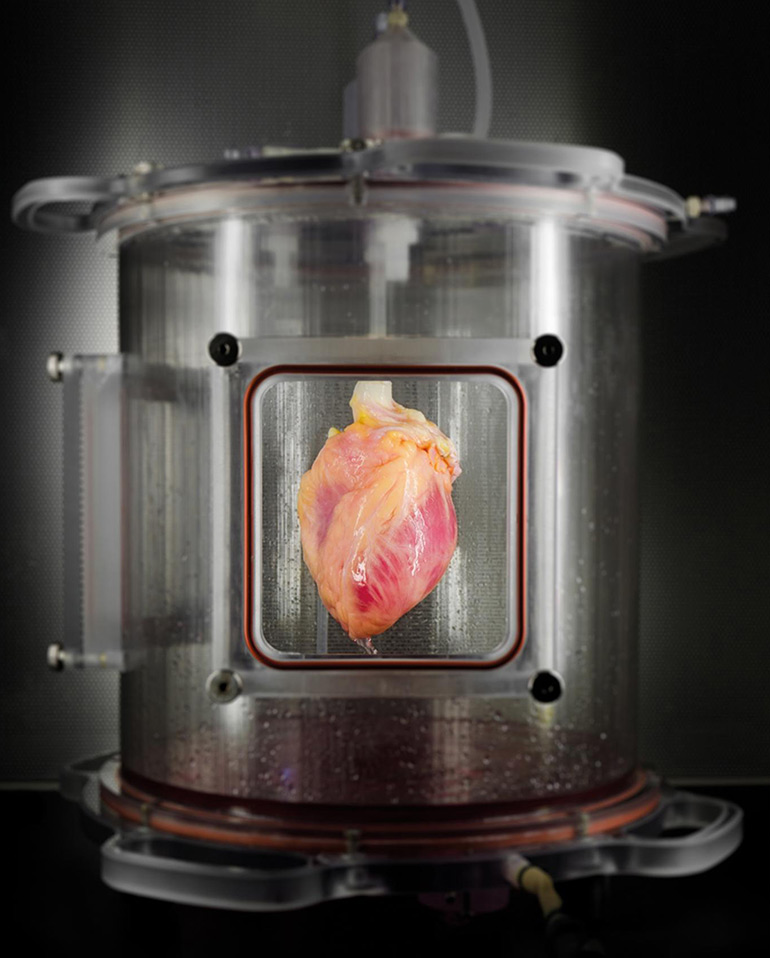 Instead of using genetic manipulation to generate iPSCs from adult cells, the team used a newer method to reprogram skin cells with messenger RNA factors, which should be both more efficient and less likely to run into regulatory hurdles. They then induced the pluripotent cells to differentiate into cardiac muscle cells or cardiomyocytes, documenting patterns of gene expression that reflected developmental milestones and generating cells in sufficient quantity for possible clinical application. Cardiomyocytes were then reseeded into three-dimensional matrix tissue, first into thin matrix slices and then into 15 mm fibers, which developed into spontaneously contracting tissue after several days in culture.

The last step reflected the first regeneration of human heart muscle from pluripotent stem cells within a cell-free, human whole-heart matrix. The team delivered about 500 million iPSC-derived cardiomyocytes into the left ventricular wall of decellularized hearts. The organs were mounted for 14 days in an automated bioreactor system developed by the MGH team that both perfused the organ with nutrient solution and applied environmental stressors such as ventricular pressure to reproduce conditions within a living heart. Analysis of the regenerated tissue found dense regions of iPSC-derived cells that had the appearance of immature cardiac muscle tissue and demonstrated functional contraction in response to electrical stimulation.

“Regenerating a whole heart is most certainly a long-term goal that is several years away, so we are currently working on engineering a functional myocardial patch that could replace cardiac tissue damaged due a heart attack or heart failure,” says Guyette. “Among the next steps that we are pursuing are improving methods to generate even more cardiac cells – recellularizing a whole heart would take tens of billions – optimizing bioreactor-based culture techniques to improve the maturation and function of engineered cardiac tissue, and electronically integrating regenerated tissue to function within the recipient’s heart.”

Team leader Ott, an assistant professor of Surgery at Harvard Medical School, adds, “Generating personalized functional myocardium from patient-derived cells is an important step towards novel device-engineering strategies and will potentially enable patient-specific disease modeling and therapeutic discovery. Our team is excited to further develop both of these strategies in future projects.”