Wearing a fitness tracker may help you keep tabs on how many steps you take, but the devicesthemselves—even with the lure of a cash reward—probably won’t improve your health, according to the biggest study yet done on the trendy technology.

Scientists say that although the activity trackers may boost the number of steps people take, it probably isn’t enough to help them drop pounds or improve overall health.

“These are basically measuring devices,” said Eric Finkelstein, a professor at Duke-NUS Medical School in Singapore, who led the research. “Knowing how active you are doesn’t translate into getting people to do more and the novelty of having that information wears off pretty quickly.”

Finkelstein and colleagues tested the Fitbit Zip tracker in a group of 800 adults in Singapore, by dividing them into four groups. Of those people, more than half were overweight and obese and about one third were active. 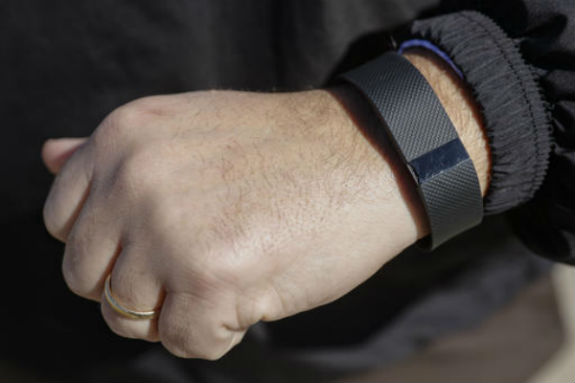 In this file photo, Brett Broviak, a manager of respiratory and sleep services at IU Health North Hospital, shows off his Fitbit fitness tracker for the camera on the hospital’s campus in Carmel, IN. Wearing a stylish fitness tracker may help you keep tabs on things like how many steps you take, but the devices themselves—even with the lure of a cash reward—probably won’t improve your health, according to the biggest study yet done on the trendy technology. (Credit: AP Photo/AJ Mast, File)

A control group got information about exercise but no tracker and a second group got the Fitbit Zip; everyone in those groups also got about $2.92 a week. Participants in the last two groups got the tracker and about $11 for every week they logged between 50,000 and 70,000 steps. One of the groups had the money donated to charity while the other kept the cash.

After six months, people with the Fitbit and who got the cash payment showed the biggest boost in physical activity. But after a year, 90 percent of participants had abandoned the device. The physical activity of the Fitbit wearers did not decline over the year as much as it did for those who were not given a tracker, but the higher activity level wasn’t enough to produce any improvements in weight or blood pressure.

“These trackers can encourage people to take more steps, but it still seems like these random extra steps aren’t enough to really improve your health,” Finkelstein said. He said what’s needed is more “active steps,” or what would amount to brisk walking or more rigorous exercise.

The study was paid for by Singapore’s ministry of health and published Tuesday online in the journal Lancet Diabetes & Endocrinology.

The results seem to reinforce those of another recent study, published last month in the Journal of the American Medical Association. In that study, conducted over two years, researchers found that adding wearable activity tracking devices to a diet and fitness program didn’t result in more weight loss. Those who didn’t wear devices lost about five pounds more than those who wore them, but both groups slimmed down and improved their eating habits, fitness and activity levels.

Fitbit, in a statement responding to the study published Tuesday, said: “We are confident in the positive results our millions of users have seen from using Fitbit products.” The statement went on to say that it was in the process of improving its trackers.

Finkelstein said that some of the newer fitness trackers have more advanced features, like prompts to exercise and ways to link to social media, but he still thinks it is unlikely people will radically change their exercise regimes without a more comprehensive approach.

Some experts said the results were disappointing, if not unsurprising.

“We should not be so naive to believe that simply by giving a sleek-looking gadget to someone, they will change deeply-rooted lifestyle habits,” said Emmanuel Stamatakis, a physical activity expert the University of Sydney who was not part of the research.

Others said the trackers might be more useful if they were aimed specifically at unhealthy people.

“People who are active are already motivated so they don’t need these devices,” said Lars Bo Andersen, of Sogn and Fjordane University College in Norway.