A contact lens designed to deliver medication gradually to the eye could improve outcomes for patients with conditions requiring treatment with eye drops, which are often imprecise and difficult to self-administer. In a study published online today in Ophthalmology, a team of researchers have shown that a novel contact lens-based system, which uses a strategically placed drug polymer film to deliver medication gradually to the eye, is at least as effective, and possibly more so, as daily latanoprost eye drops in a pre-clinical model for glaucoma.

“We found that a lower-dose contact lens delivered the same amount of pressure reduction as the latanoprost drops, and a higher-dose lens, interestingly enough, had better pressure reduction than the drops in our small study,” said first author Joseph B. Ciolino, M.D., an ophthalmologist at Massachusetts Eye and Ear and an Assistant Professor of Ophthalmology at Harvard Medical School. “Based on our preliminary data, the lenses have not only the potential to improve compliance for patients, but also the potential of providing better pressure reduction than the drops.”

Glaucoma is the leading cause of irreversible blindness in the world. While there is no cure for glaucoma, ocular medications aim to lower pressure in the eye with the goal of preventing vision loss. Currently, the medications are delivered as eye drops, which sometimes cause stinging and burning, can be difficult to self-administer and are subsequently associated with poor patient compliance, with some studies suggesting that compliance is as low as 50 percent.

“This promising delivery system removes the burden of administration from the patient and ensures consistent delivery of medication to the eye, eliminating the ongoing concern of patient compliance with dosing,” said Janet B. Serle, M.D., a glaucoma specialist at Icahn School of Medicine at Mount Sinai.

Contact lenses have been studied as a means of ocular drug delivery for nearly 50 years, yet many such lenses are ineffective because they dispense the drug too quickly. The authors of the Ophthalmology study designed the contact lens to allow for a more controlled drug release. The researchers had previously shown in a 2014 study that the lens is capable of delivering medication continuously for one month. 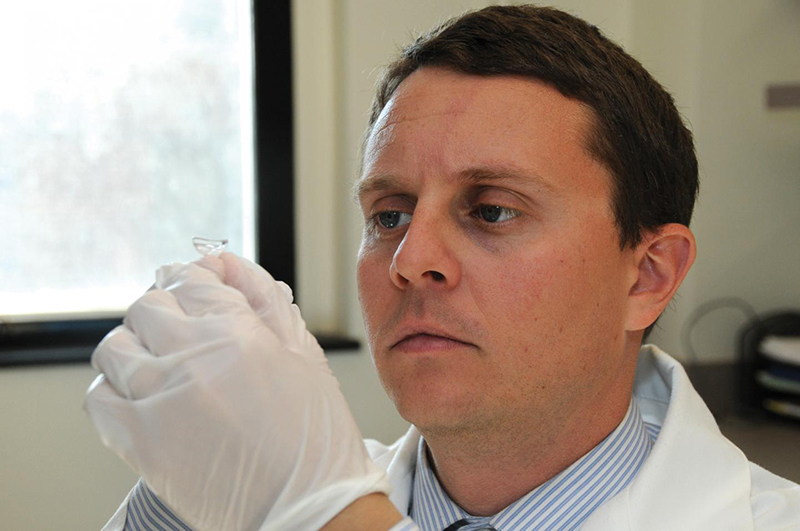 A contact lens designed to deliver medication gradually to the eye may improve outcomes for patients who struggle with imprecise, difficult to self-administer eye drops. (Credit: John Earle Photography)

The researchers designed a novel contact lens that contains a thin film of drug-encapsulated polymers in the periphery. The drug-polymer film slows the drug coming out of the lens. Because the drug film is on the periphery, the center of the lens is clear, allowing for normal visual acuity, breathability and hydration. The lenses can be made with no refractive power or with the ability to correct the refractive error in nearsighted or farsighted eyes.

“Instead of taking a contact lens and allowing it to absorb a drug and release it quickly, our lens uses a polymer film to house the drug, and the film has a large ratio of surface area to volume, allowing the drug to release more slowly,” said senior author Daniel S. Kohane, M.D., Ph.D., director of the Laboratory for Biomaterials and Drug Delivery at Boston Children’s Hospital.

In a study supported by a grant from the Boston Children’s Hospital Technology and Innovation Development Office, the effect of this drug eluting contact lens was assessed in four glaucomatous monkeys. The researchers showed that the contact lens with lower doses of latanoprost delivers the same amount of eye pressure reduction as the eye drop version of the medication. The lenses delivering higher doses of latanoprost had better pressure reduction than the drops. Further study is needed to confirm the finding in the higher-dose lenses.

The researchers are currently designing clinical trials to determine safety and efficacy of the lenses in humans.

“If we can address the problem of compliance, we may help patients adhere to the therapy necessary to maintain vision in diseases like glaucoma, saving millions from preventable blindness,” said Dr. Ciolino. “This study also raises the possibility that we may have an option for glaucoma that’s more effective than what we have today.”