“WiSE is unique, significant technology that’s cleared for use in Europe and has proven very beneficial thus far,” said Jagmeet Singh, M.D., DPhil, principal investigator for the planned study, and associate chief of cardiology and professor of medicine at Harvard Medical School at Massachusetts General Hospital. “This important medical advance addresses major shortcomings in current CRT implants and could dramatically improve success rates for heart failure patients around the globe.”

EBR Systems’ WiSE technology is the world’s only wireless, endocardial (inside the heart) pacing system for stimulating the heart’s left ventricle. This has long been a goal of cardiac pacing companies since internal stimulation of the left ventricle is recognized as a potentially superior, more anatomically correct pacing location. 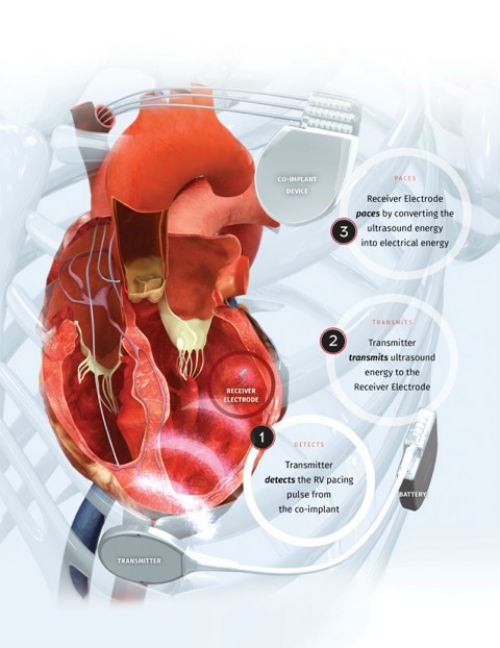 Studies have demonstrated that successful CRT therapy reduces heart failure symptoms, hospitalizations and mortality by synchronizing the left and right ventricles. However, approximately 30 percent of patients receiving conventional CRT do not respond to the therapy. A major cause of this shortcoming is believed to be the inconsistency of results achieved using wire leads to transmit pacing pulses to the left ventricle’s epicardial (exterior) surface.

Although it is generally accepted that internal stimulation of the left ventricle is preferable, wire leads or large implants placed inside the left ventricle can cause clots, heart attacks or stroke. Consequently, this pacing location is not currently used by commercially-available CRT systems in the United States.

Additionally, wire leads can break or otherwise fail, leading to complications in roughly 12 percent of cases.

WiSE technology addresses those problems by enabling cardiac pacing with a novel, cardiac implant that is roughly the size of a large grain of rice. The need for a pacing wire on the outside of the heart’s left ventricle—and the attendant problems—are eliminated.

“Patients who have failed conventional CRT continue to deteriorate from their heart failure and are repeatedly subjected to costly hospitalizations,” said Ohio State University Professor of Medicine William Abraham, M.D., heart failure expert, director of OSU’s Wexner Medical Center and member of the study’s steering committee. “We have actively sought new treatment alternatives for this large and growing patient population.

“WiSE is easily the most promising solution to this costly problem. Its tiny receiver makes endocardial, left ventricular pacing possible for the first time. There is nothing like it in cardiology.”

IDE approval gives EBR Systems clearance to initiate the 350 patient Stimulation Of the Left Ventricle Endocardially–CRT study (SOLVE-CRT). These patients must have either failed conventional CRT or they were previously untreatable with conventional CRT systems.

The SOLVE-CRT study will be a prospective, randomized controlled trial using generally-accepted measures of safety and efficacy as primary endpoints at six months. EBR Systems anticipates starting this clinical trial in mid-2017.

EBR anticipates introducing its second generation WiSE Technology in Europe in early 2017 and subsequently including it in the SOLVE-CRT study. The transmitter size has been reduced by half, making it smaller than a conventional pacemaker. Second generation battery life is expected to equal conventional CRT systems.

Results of EBR Systems’ prior SELECT-LV study were presented in May 2016 by Mt. Sinai Hospital cardiologist and Professor of Medicine Vivek Reddy, M.D., at the Heart Rhythm Society Scientific Sessions in San Francisco. In a study of 35 patients who had failed conventional CRT therapy, 97 percent were implanted successfully with WiSE technology. Of the 33 patients who reached the six-month effectiveness endpoint, 85 percent improved their clinical composite score which is a measure of symptom improvement.

“A growing body of evidence strongly suggests EBR’s WiSE technology can benefit patients who have failed conventional cardiac resynchronization implants,” said EBR Systems CEO Allan Will. “We look forward to demonstrating the benefits of WiSE technology for these patients in the first randomized clinical study of wireless endocardial pacing for heart failure.”

EBR Systems’ WiSE technology consists of a tiny electrode implanted in the left ventricle. With every heartbeat, it receives a synchronized ultrasound signal from a small transmitter placed between two ribs. Those sound waves are converted to electrical energy, providing cardiac pacing.

This unique technology eliminates the need for a left ventricular lead and lets the physician place the stimulation point at a more ideal location inside the left ventricle (endocardially) where it can be most effective. Endocardial stimulation is generally considered more like the natural activation pattern of the heart than today’s epicardial (surface) pacing techniques. Data from multiple sources strongly suggests this can benefit patients and is a potential major advance in left ventricular stimulation.

WiSE is the world’s first and only wireless cardiac pacing system for heart failure. It is approved under a CE Mark for use in Europe. In June 2105 it was selected “Favorite Innovation” winner at the annual EUROPACE CARDIOSTIM congress in Milan, Italy.

The company’s wireless pacing system is not currently available for use in the United States.