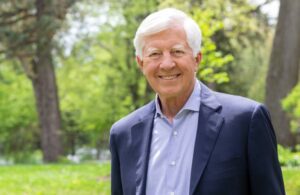 The medtech veteran offers his advice for leaders in the industry — and how to make opportunities for aspiring leaders to rise.

He served as chair and CEO of Medtronic across the 1990s and into the mid-2000s. That came after stints as an executive with Honeywell and Litton Industries. Since 2004, he has taught leadership at Harvard Business School, where he now holds the role of executive fellow.

George recently published a new version of his book, “True North: Emerging Leader Edition.” In it, he discusses the need for a transition to a new crop of leaders. He spoke with Medical Design & Outsourcing about his book, leadership in the medtech space and leadership altogether.

“For the last 20 years, I’ve been working on trying to develop more authentic leaders at Harvard and other places, working with a lot of corporations. I wrote the new book because I think it’s time for a new generation,” George said. “The baby boomers have had their day.”

Some answers in this Q&A have been edited for clarity and length.

What needs to change in today’s leadership?

“What’s really changed is that the old command-and-control-style, top-down leadership practice — Jack Welch-style, if you will — will not work today. I think we need a whole new form of empowering leadership. I think leaders should look at themselves less as directors and managers of people and more as coaches of people. It is time for the new generation to really understand the millennial generation and what their needs are, their desires.

“Frankly, people today are not primarily concerned with maximizing shareholder value. They’re concerned with leading with a sense of purpose. And if your company doesn’t have that purpose, they don’t want to work there. At Medtronic, fortunately, we had a mission that Earl Bakken, our founder, put in long before I arrived. There was a dominant driving force in the company for restoring people that full life and health.”

Fostering innovation and leadership through COACH-ing

The “C” stands for “care” — in letting people know you, as a leader, care about them. “O” stands for “organize” — using peoples’ strengths and finding places they’re most effective in the organization. “A” stands for “align” — allowing people to find the alignment between their personal purpose and that of the company. The second “C” stands for “challenge” —because “any good coach is going to challenge you back,” George said. Finally, the “H” stands for “help.”

“I think leaders today need to get in and work with people to help them, not just stand back and judge,” George said. “That was the old style — stand back and judge, giving a performance review once a year and telling them how they’re doing. Let’s engage with people. We have a problem? Let’s get everyone together around the table and solve the problem. Bring in the best people we can. That’s what we tried to do at Medtronic. This is the motto we tried to follow.”

George added that leaders have to look at their roles differently today. There’s a difference between managers and leaders.

“There are millions of managers out there. There are not enough leaders,” George explained. “Leadership is revealed in a crisis. … You have any kind of crisis like COVID, you find out who the real leaders are, who’s going to step up in that time. The people who take charge aren’t necessarily the ones with the big titles, and to me, those are the real leaders.”

How do you create and maintain culture within an organization?

Finding people with the same values as the company — people who put human life first and know that restoring health is the mission — is paramount.

“I believe that you get people who keep the vision out there, where you’re going to restore people to full life and health,” George said. “You put the focus on your company’s mission and its values. I used to tell people at Medtronic, ‘We’re here to alleviate pain, restore health and extend life. If that doesn’t turn you on, probably should go to work for Merrill Lynch and trade stocks. You’re in the wrong field. But if it excites you, you’ll have a fantastic career, and at the end of the day, you realize all the people you’ve helped.'”

As for turning that into innovation, George referenced Disney’s recent CEO change and said you can’t centralize creativity. Leaders don’t have to be innovators, but they have to create an environment where the innovators can flourish.

“I didn’t invent anything. But I did support the innovators at Medtronic. … The leaders in this industry have to be willing to take risks and recognize that things will fail. And some things will take a very long time,” George explained. “You have to have a tolerance for risk, and you have to have the long-term view. If you don’t have that, if you just want to make the quarterly numbers, you probably won’t make it in this industry for the long term. You might make the numbers this quarter, but in the end, you’ll get the culture that doesn’t innovate, and you won’t have it.”

Who in medtech stands out right now from a leadership perspective?

Of the current leaders in medtech, George agreed to name a few that he thinks are doing a particularly strong job. Stryker CEO Kevin Lobo made what has always been a great company greater, he said. Mike Mahoney “turned around Boston Scientific.”

Altogether, the medtech industry needs these types of leaders, he said, because the need for medical technology isn’t going away.

How do you recruit and retain talent?

When asked about recruiting top talent as times and people change, George had a quick counterpoint.

“The first thing you do is, you develop the people you have. I think companies have neglected that,” he said. “I think there needs to be a lot more emphasis on leadership development. Figure out who the real leaders are and give them an opportunity. … You want to develop the talent you have. Give them the leadership roles, and you’ll be shocked at how well they perform.”

He emphasized that the door must be open to pave the way for young leaders to come along. Otherwise, they’ll leave. The issue, George said, is not just talent recruitment, it’s the loss of talent.

“As far as talent recruitment, if you’ve got great leaders in your company, they’re going to recruit people that are like them and are going to recruit very talented people,” he said. “That’s what I would look for. I would start early and try to get high levels of retention because your company’s paying them well, but beyond that, you’re giving them a real sense of purpose and an opportunity they wouldn’t get elsewhere. Companies that do that are going to flourish. Companies that don’t are going to struggle.”

For anyone who aims to lead a company big or small, whether tomorrow or in 10 years, George said experience counts.

“Get a chance to go run something,” he said. “If you’re not the inventor yourself, work with a group of engineers, create a new product create a whole new business. Make a venture out of it and build it into a mainstream business. … That’s the greatest growth experience you can have.”

It’s a path George himself followed, and he explained that the freedom to make mistakes still leads to the experience needed to effectively lead.

“If [top leaders are] looking for perfection, they’re in the wrong industry,” George said. “Give people the opportunity to show what they can do. … They’ll exceed your expectations. Not everyone, but an awful lot of people will.”

Advice for anyone in medtech?

While at Medtronic, George said he had a policy to never lay off engineers or salespeople. “They were the cogs that made our organization go,” he said.

Give people the freedom to try things by investing heavily in R&D, and you’ll figure out what the industry wants.

“In this industry, the engineers [should] get close to the doctors. Get to know the real innovative doctors, the physicians on the cutting edge. Because they’ll have ideas you never thought of. … Get out and develop these partnerships, get out and talk to the doctors. … That’s where life and death hangs in the balance. Then you can understand the importance of quality, innovation and breakthrough ideas and how important it is that they work for the doctors, not just in the engineering lab.”

RELATED: Employees say Intuitive, Boston Scientific, J&J and Medtronic are among the best places to work