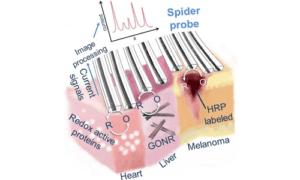 Researchers in Switzerland and Taiwan are using electric currents to map the distribution of biomolecules in cancer cells to give doctors a better understanding of which therapies would be most effective for treating cancer.

The EPFL researchers used a scanner with electrochemical probes to map the distribution of biomarkers and nano materials in animal and human tissue. The device features eight flexible micro electrodes that are lined up next to each other to scan tissues that have been soaked in an electrolyte solution and measure the electrochemical response. Researchers reconstruct the image using electric currents that are generated from molecules and nanomaterials that have built up in tissues. The molecules and nanomaterials exchange electrons with the electrochemical mediator of the electrolyte solution.

Electrochemical imaging is also used to monitor the redox state of cancer cells which can help determine how many cancer cells are present and where they are located.

Researchers specifically wanted to study the biomarkers in melanoma. Melanoma biomarkers are commonly found in the black spots of overly ripe bananas. So, they tested the imaging technique on bananas to measure the tyrosinase in human skin and map its distribution. The researchers now want to use that information to make the imaging technique work on thick tissues like when biopsying human skin.

“We are perfectly capable of using electrochemistry to kill cancer cells on microscope slides and in petri dishes, but doing so in thick tissue is another story,” Hubert Girault, one of the researchers on the study, said in a press release.

Girault hopes that the device and technique can be further developed to use electrochemical microscopy during surgery. He also hopes the device will feature interconnected microelectrodes that can create an image that will indicate the presence of a tumor while electrochemically destroying cancerous cells using voltage.

The research was published in the journal Angewandte Chemie International Edition. 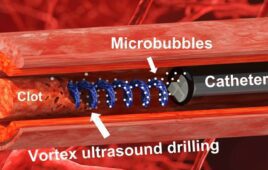