Researchers advise that this type of training, in spite of offering various neurological, metabolic and functional advantages, should be done in addition to a normal work out and not as a substitute

Practicing High Intensity Interval Training, or HIIT, together with integral electro-stimulation generates an up to 30% higher consumption of calories than conventional aerobic exercise.

In addition, this type of combined exercise increases the metabolism rate for several days after the workout (the body continues to burn calories). Conventional aerobic activity, however, generates lower calorie usage and only does so during the activity itself.

These are among the conclusions of a study carried out researchers of the EFFECTS-262 group of the Physiology Department at the University of Granada (Faculty of Medicine). The study is published in the Andalusian Journal of Sports Medicine. 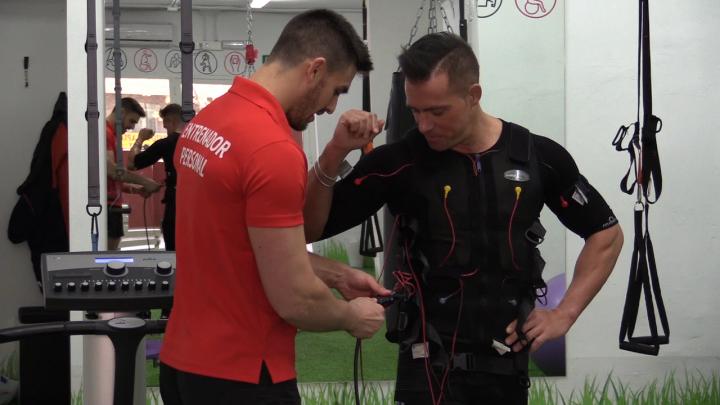 An example of electrostimulation during a workout (Credit: University of Granada)

12 sedentary subjects with a body mass index of over 35 participated in the study. They were submitted to three kinds of training on three consecutive Mondays, organized randomly. Scientists had previously determined the basal metabolism of each subject using a 30-minute, early morning analysis after a 10 minute stabilization period and on an empty stomach.

Additionally, after 60 minutes of training and again 24, 48 and 72 hours later, they performed the basal metabolism and DXA (body composition) measurement again. All sessions were monitored using a heart rate monitor, pulse oximeter, arterial tension measurement and a subjective perception of wellbeing.

Lactate in the Blood
The high-intensity workout with electrical muscle stimulation (EMS) showed higher levels of lactate concentration in the blood (15.6 mmol.L-1) than after aerobic exercise (2 mmol.L-1). Additionally, the researchers also found significant differences in basal oxygen consumption at 60 minutes and 24, 48 and 72 hours after the different kinds of workout.

The basal oxygen deficit levels reached during the electro-stimulation and HIIT workout were notably higher than those reached in the pre-test up to 72 hours after performing the physical activity. This represented a significant difference from the results of the aerobic workout, after which VO2 levels (the amount of oxygen that an organism can consume in a given time) reached similar values as those in the 60-minute pre-test.

UGR Physiology professor Ángel Gutiérrez Sáinz notes that combining a 20-minute weekly session of HIIT with electro-stimulation “offers extraordinary neurological, metabolic and functional advantages for sedentary people as well as elite athletes suffering from an injury and athletes in training.”

Gutiérrez warns that this kind of training with an electro-stimulation vest “should never be seen as a substitute for sport but, nevertheless, is an excellent complement to it.” He adds, “it should always be administered by an expert professional.”

The UGR researcher states that the market strategy of electro-stimulation “has reported more harm than benefits. Nevertheless, it is an effective system that, when controlled by professionals, increases the benefits of exercise as it helps to simultaneously engage more than 300 muscles around the entire body.”