Embolic protection devices could reduce risks of interventional cardiac procedures such as TAVR, but their efficacy is hard to prove. 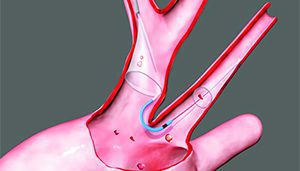 The embolic protection device (EPD) market is expected to grow into a billion-dollar industry if the device becomes the standard safety protocol for transcatheter aortic valve replacement (TAVR) and other interventional cardiac procedures. However, EPD tech has found limited success in clinical trials.

One potential reason is that even with well-designed devices, efficacy is difficult to demonstrate. EPDs are engineered to catch or deflect debris loosened during TAVR procedures away from cerebral arteries. By and large, they do a good job: Claret Medical’s Sentinel device, cleared by the FDA this year, trapped micro debris in 99% of cases. However, in its pivotal trial, the data did not conclusively show it improved patient outcomes.

Transcatheter aortic valve replacement, a widely popular alternative to surgery for high-risk patients, carries a small but serious risk of stroke, cerebral lesions and increased risk for neurological complications[1] associated with debris blocking a cerebral artery, according to a study published in November 2016 in the American Journal of Cardiology. Deploying an EPD during the procedure should, in theory, reduce that risk.

An estimated 300,000 individuals worldwide have received TAVR, according to Future Market Insights. The growth in the TAVR market has, in turn, grown the EPD market potential. As of August 2017, three EPD devices had E.U. market clearance, and one had achieved FDA clearance. To capitalize on this commercial potential, future devices must optimize their clinical studies to show their efficacy.

Here are a few best practices EPD manufacturers must apply to design a successful trial that demonstrates the lifesaving potential of these technologies:

TAVR has become a standard option for high-risk patients with severe aortic stenosis because it is equally as safe as surgery and minimally invasive. But when determining which patients should be chosen for a TAVR-EPD trial, sponsors must bear in mind that recruitment procedures are more challenging than other cardiac device trials. Assessments of valve severity, comorbidities, and mortality risk all must be done prior to the procedure. Knowing the dosing of certain medications or existence of carotid stenosis, for example, is necessary to determine later if these factors had a role in any post-procedure strokes. TAVR-EPD study patients must also have had stable health for 30 days before undergoing the procedure.

Because EPD trials require more time and resources than typical device trials, manufacturers should select sites that have a history of dedication to patient enrollment and retention. One reason for this is the recent expansion in the U.S. and the E.U. of TAVR indication to include intermediate – risk individuals. Sponsors will need to document and evaluate patient health carefully to ensure that study participants match the characteristics included in the expansion. The team should include not only cardiology and imaging specialists, but also geriatricians, heart failure experts, stroke neurologists, electrophysiologists, anesthesiologists and behavioral specialists. The best patient outcomes are most likely achieved with a committed, organized, and multidisciplinary team both in study settings as well as in post-approval commercial use of the devices.

In past trials, strokes were often based on clinical symptoms alone. However, the Stroke Council of the American Heart Association/American Stroke Association (AHA/ASA) now provides instructions on how to address the inclusion of clinically silent brain lesions as endpoints, and how to accommodate changes in imaging technology. Should a silent stroke that is captured by magnetic resonance techniques actually count as a stroke? Including such imaged events, the AHA/ASA cautions, could “unnecessarily inflate the assessment of risk of those procedures without a measurable clinical advantage to doing so.”