Your next operation may be performed by a machine During my grandmother’s final years, more than once did a family member remark on how much she’d seen—and how much technology had changed the world—during her 97 years here. From the automobile’s ascension, modern jet travel and the space race to the personal computer, the Internet and the smartphone, it was (has been?) a stunning time in human history. But there’s reason to think that her great-grandkids may hear similar proclamations in their final years. Fast forward to 2092, and my children will likely look back, amazed at how surgery used to be performed by hand, without even some assistance from the amazing robotic machines that so revolutionized healthcare during their lifetimes.

Perhaps the Cadillac of surgical robots, the da Vinci Surgical System, manufactured by Intuitive Surgical, allows surgeons to perform extremely precise and complex operations on a patient. And instead of the huge sutures from days gone by, the machine can operate through relatively small cuts (as small as 1- to 2-cm) in a patient. The system, priced near $2 million, is comprised of several components:

• an ergonomically designed console where the surgeon sits while operating,
• a patient-side cart where the patient lays during surgery,
• four interactive robotic arms,
• a high-definition 3D vision system, and
• a range of the company’s EndoWrist instruments.

Before you think that this is a rare device you’re not likely to encounter at your local medical center, consider that as of this past June, approximately 2,600 systems had been sold to almost as many hospitals. da Vinci’s robotic technology allows a surgeon’s hand movements to be scaled, filtered and translated into precise movements of the EndoWrist instruments that are actively working inside the patient’s body.

Doctors perform surgery sitting at a console a few feet away from the patient. da Vinci translates that surgeon’s hand movements into corresponding micro-movements of instruments inside the patient’s body. Intuitive Surgical says that the da Vinci System provides better visualization, dexterity, precision and control than open surgery, while enabling the surgeon to perform procedures through tiny incisions. The vision system of da Vinci delivers high-resolution video into the surgeon’s console viewer. This provides visual sharpness that is greater than anything previously available. As the surgeon operates, he or she sees high definition video in 3D for true perception of depth. A digital zoom feature can provide a highly magnified view of tissue. Intuitive Surgical claims that the immersive quality of the 3D vision provides a virtual extension of the surgeon’s hands and eyes into the patient’s body.

Another surgical robot that has seen a lot of press is the IBIS system, a pneumatically powered device that works through “keyhole” sized incisions in a patient, pictured at left. This system, now in version 6, is being developed as an open source design, and is potentially one-tenth the cost of devices like da Vinci. Kenji Kawashima, professor at the Tokyo University of Technology’s Institute of Biomaterials and Bioengineering, said that pneumatics was an easy choice for IBIS. “Pneumatic actuators with a high power-to-weight ratio obviate the need for a reduction gear, in order to realize compatibility between adequate torque and high back-drivability—and they also make the system smaller and lighter,” said Kawashima.

In addition, the inherent springiness of the pneumatics allows the robot to gently absorb the force when the forceps touch something.

The biggest challenge with IBIS was in how the team could realize degrees of freedom at the tip of the forceps. For the forceps manipulator on the slave side, pneumatic actuators, instead of electric motors, are used to detect external forces, based on pressure values without a force sensor. Force on the tip of the robot is estimated from the air pressure data; that is then sent to the master robot, so it can be fed back to the surgeon’s hand.

“We focus on a flexible joint structure that is suitable for surgical manipulators,” said Kawashima. “A high performance spring component with wire actuation is employed for two-degree of freedom bending joints, and a two-DOF tendon drive system is implemented by four pneumatic cylinders.”

Another benefit a surgeon can see from IBIS is that the robot can eliminate shaking of the surgeon’s hands. The operator can also change the motion ratio for very fine movements and adjust the force feedback factor. This allows for more customization of the system on the spot.

According to a report by Martin Haegele, Department Head, Robot and Assistive Systems, Fraunhofer IPA, active robotic surgery can be extremely precise. Systems used for orthopedic surgery, such as cement-less implantation, reduce the gaps between implant and bone to 0.05 mm—compared with 1 to 4 mm for manual surgery. While a manual broach often leaves holes oversized by more than 30% (and only 20% of the implant is in contact with the bone), robotic milling raises this level of contact to an amazing 96%. 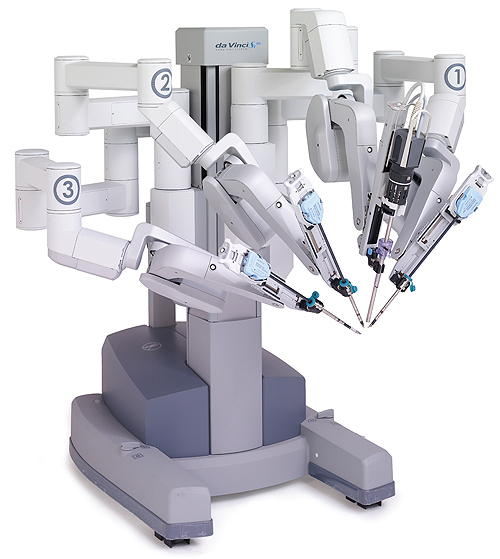 The report indicated that the costs of medical robots, although still very high, can be compensated through:

Haegele points out that in recent years, robotic prostatectomy has become the most popular approach to this surgery in the U.S. and has boosted the prevalence and sale of robotics. A wealth of studies have been published recently on cost/benefit and risk aspects of medical robots. Generally, they draw positive conclusions; however they also indicate further potentials in the design, operation of surgical robots, and training for surgeons.

Into the future
Challenges lie ahead for IBIS. Kawashima explained that it is not easy to develop a system for practical use—the team needs strong grasping and must redesign the grasping mechanism. A practical system may still be four or five years away.

TUT is in the process of undergoing in vivo experiments, and the team is developing version 7, which will be able to be used for clinical experiments.

Over the next five to 10 years, Kawashima sees the robotics forceps component becoming more compact, as well as suitable for more dexterous operation. And by 2030, he thinks robotic surgery will become more commonplace than traditional surgery, as the systems will be more compact and more useful for surgeons.

Tokyo University of Technology, Institute of Biomaterials and Bioengineering
www.tmd.ac.jp/i-mde/www/bmc/people/index_e.html