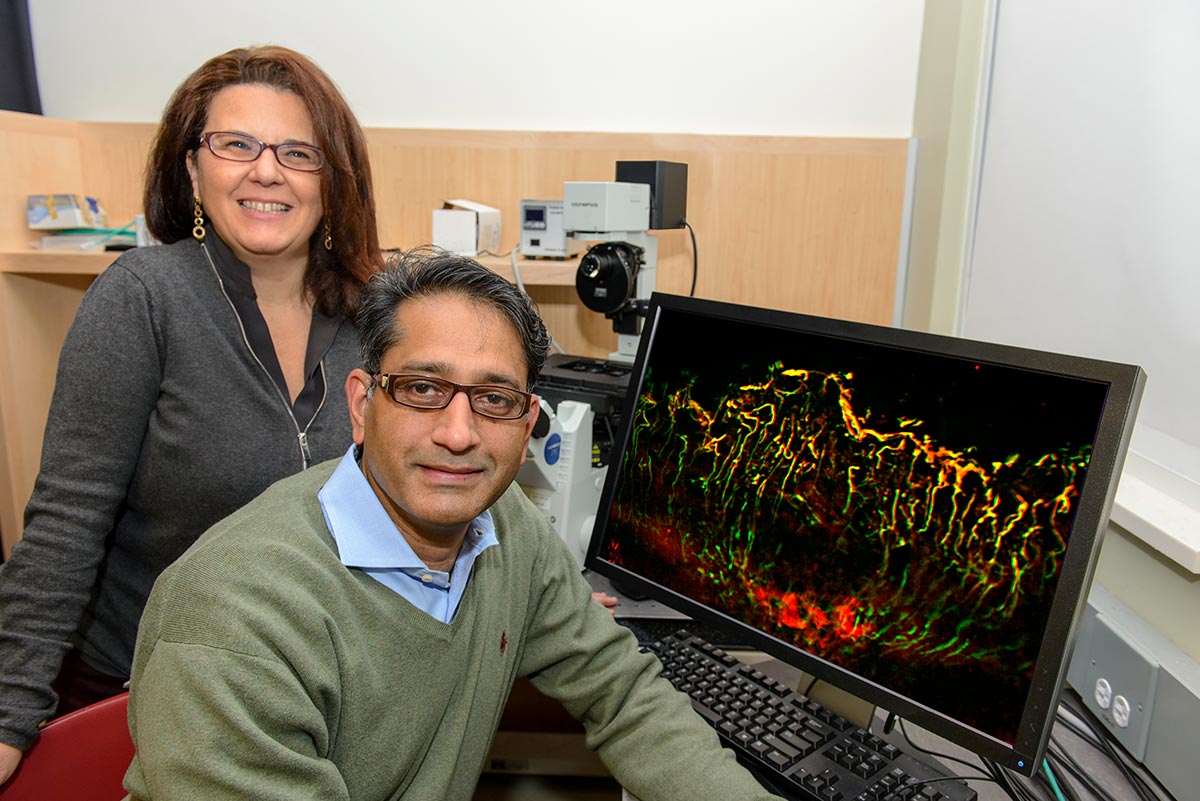 UConn scientists are working with a biomarker to enable earlier detection of a condition that leads to age-related macular degeneration, the leading cause of blindness in the U.S. Royce Mohan (seated) and Paola Bargagna-Mohan are part of a team of UConn researchers developing an imaging technique that will signal problems in blood vessels near the eye that could lead to loss of vision. (Credit: Janine Gelineau/UConn Health Photo)

Age-related macular degeneration is the leading cause of blindness in the U.S., and UConn scientists are working toward a way to enable earlier detection of a condition that leads to it.

Led by Royce Mohan, associate professor of neuroscience at UConn Health, a team of researchers is developing a fluorescent small molecule imaging reagent to help identify preclinical stages of ocular fibrosis, or the growth of blood vessels from the back of the eye into the retina.

The researchers, including Paola Bargagna-Mohan, assistant professor of neuroscience, and Dennis Wright, professor of medicinal chemistry in the UConn School of Pharmacy, believe this biomarker probe could have major treatment implications, as this fibrosis is associated with an aggressive form of age-related macular degeneration – known as wet AMD – that causes rapid vision loss.

“There are drugs that are effective in slowing the growth of the blood vessels in AMD,” says Mohan, “but many patients are diagnosed and identified as candidates for these drugs too late to make a difference.” Through early detection, the researchers hope to help avoid secondary complications associated with ocular fibrosis.

The idea behind their innovative fluorescent small molecule imaging reagent is that it binds to specific intermediate filament proteins. These filament proteins, called vimentin and glial fibrillary acidic protein, are biomarkers of wet AMD, which means they are indicators of cells acting as first responders to stress signals in compromised areas of the retina. The increased presence of vimentin also signals problems with the inner lining of blood vessels.

“Being able to detect the changes in these biomarker proteins can be profoundly important, as one gets a view of early wet AMD from the perspective of both blood vessel growth and glial cell responses that has never before been captured,” Mohan says.

The fluorescence of the imaging reagent makes detection easy, and also localizes to where these events are occurring in the retina.

“Current treatments stop the growth of the blood vessels only while they’re still growing, not after blood vessels become mature,” Mohan says. “If we had the diagnostic means to monitor the earliest stage of wet AMD leading to fibrosis, patients might benefit from therapies.”

In addition to enabling earlier intervention, a reliable method of early detection also would allow doctors to monitor the progress of that intervention and determine its effectiveness before getting to a point of no return. Patients can develop resistance to the treatment, but in most cases, by the time that is realized, they are out of options to save their sight.

Connecticut Innovations recently awarded a $500,000 grant from its Connecticut Bioscience Innovation Fund to Mohan and his collaborators. The grant is intended to speed the process to commercialization so that the biomarker probe can help patients sooner.

“The work that Dr. Mohan and his colleagues are conducting is a prime example of innovative research from UConn’s labs leading to potential solutions for an urgent, unmet medical need and future economic growth in the state,” says UConn Vice President for Research Jeff Seemann, whose office helped facilitate the grant application.