A new lab-on-a-chip system, developed by the University of Twente in The Netherlands, is capable of fast analysis of the effects of toxic substances on hemoglobin, for example. It mimics human metabolism.

The effect that toxic substances have on, for example, hemoglobin in blood, can now be tested in a fast way using a new lab-on-a-chip. University of Twente scientist Floris van den Brink developed a fast and efficient mixer for this. 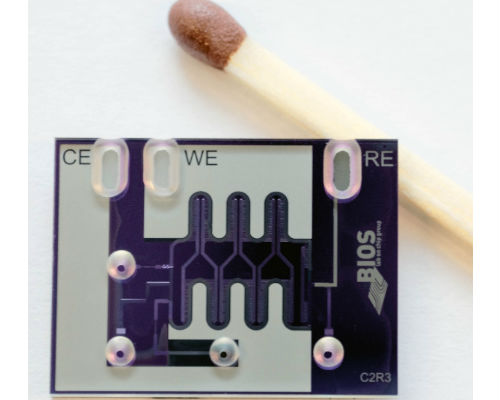 Substances foreign to the human body—toxic substances, or medication, for example—can have such a short lifetime that the effect is hard to examine. Sometimes the damage already has been done. For example: What happens if polycyclic aromatic hydrocarbons (PAH) interact with hemoglobin in blood? PAH’s are released at asphalt road works or coal power plants, for example. Using his new lab-on-a-chip system, van den Brink is able to examine this fast interaction, just like in the human body.

Our body, especially the liver, converts these foreign substances into metabolites. The chip does this as well: A tiny electrochemical reactor produces PAH metabolites like hydroxypyrene. The next step is mixing these metabolites with hemoglobin, to see in what way the toxic and highly reactive metabolite binds to hemoglobin. Using a new mixing technique, this can be done very fast—well within a second.

Using the same micro laboratory, possible remedies can be examined as well for detoxing the blood. In this way, the chip can also be used for measuring the effects of medication without the need of using laboratory animals.

Mixing of fluids on a micro or nano scale is not trivial: They behave differently in the tiny fluid channels, and mechanical stirring is not an option. Van den Brink therefore designed two circular mixing chambers, consisting of tiny channels that have a gradient. One substance enters above, the other below. Using the angle difference, mixing can be accelerated substantially. The entire mixer is no bigger than 0.1 square millimeter. Using mass spectrometry, the output is analyzed. The reactor is also special. Using diamond electrodes instead of platinum ones, the yield is improved.

Measuring the effect of hydroxypyrene metabolites on hemoglobin is just one example of the possible applications of the new chip. The system is suitable for analyzing numerous types of interactions with proteins, possibly DNA as well. As proteomics is gaining importance in the development of medicine, the chip is a fast and powerful tool.