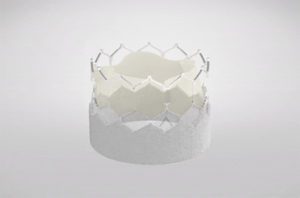 The FDA approved the device for severe, symptomatic aortic stenosis patients for whom open-heart surgery is considered an intermediate or greater risk, the Irvine, Calif.-based company said.

For the Ultra, Edwards has added a taller skirt with sizes 20, 23 and 26 mm to the Sapien 3 design to eliminate paravalvular leak and improve TAVR outcomes. The Ultra device also introduces an “on balloon” design that the company said does away with the need for valve alignment during the procedure. The delivery system is compatible with its 14F Axela expandable sheath.

“The advanced SAPIEN 3 Ultra system features enhancements on the valve and a new delivery system to address the needs of both patients and clinicians, building on our best-in-class performance of SAPIEN 3 to further advance and improve patient care,” said Larry L. Wood, Edwards’ corporate vice president, transcatheter heart valves, in a statement. “We look forward to introducing the SAPIEN 3 Ultra system to U.S. patients.”

Edwards received the CE Mark for Sapien 3 Ultra in November 2018, but could not launch it in Germany due to a patent dispute with Boston Scientific (NYSE:BSX). In October, Boston won an injunction barring Edwards’ the Sapien 3 Ultra valve from the German market, after the District Court of Düsseldorf found that Edwards infringed a patent Boston acquired with the $435 million purchase of Swiss valve maker Symetis in May 2017. The infringement concerns the fabric used on the valve seal, Marlborough, Mass.-based Boston Scientific said

The German court will hold a full hearing on the merits of the dispute in mid-2019, Edwards has said.