The Food and Drug Administration said it would hold the meeting even as its officials and several independent experts disputed the new work. Leaders of the study concede that it has big limitations and cannot prove that implants cause any of these problems.

Yet it involves nearly 100,000 women and is the largest long-term safety analysis of silicone implants since 2006, when they were allowed back on the U.S. market after a 14-year gap due to safety concerns.

“We completely stand behind this study and we do feel it’s our best data to date,” said lead researcher Dr. Mark Clemens, a plastic surgeon at the University of Texas MD Anderson Cancer Center. Women need as much information as possible to make an informed decision about whether and what kind of implant to get, he said.

The report appears in the journal Annals of Surgery. Study leaders have no current ties to implant makers although Clemens consulted for one in the past.

Each year in the U.S., about 400,000 women get an implant and most choose silicone over saline; surgeons say it can give a more natural look. Three-fourths are for women who want bigger breasts; the rest are for reconstruction after cancer surgery.

“Breast implants are not lifetime devices” and up to 20 percent of women getting them for enlargement need to have them removed within 8 to 10 years, the FDA’s website warns.

Complications can include infections, wrinkling, scarring, pain, swelling and implant rupture. Implant users also may have a very small but increased risk of a rare lymphoma, a type of cancer, the FDA has said. 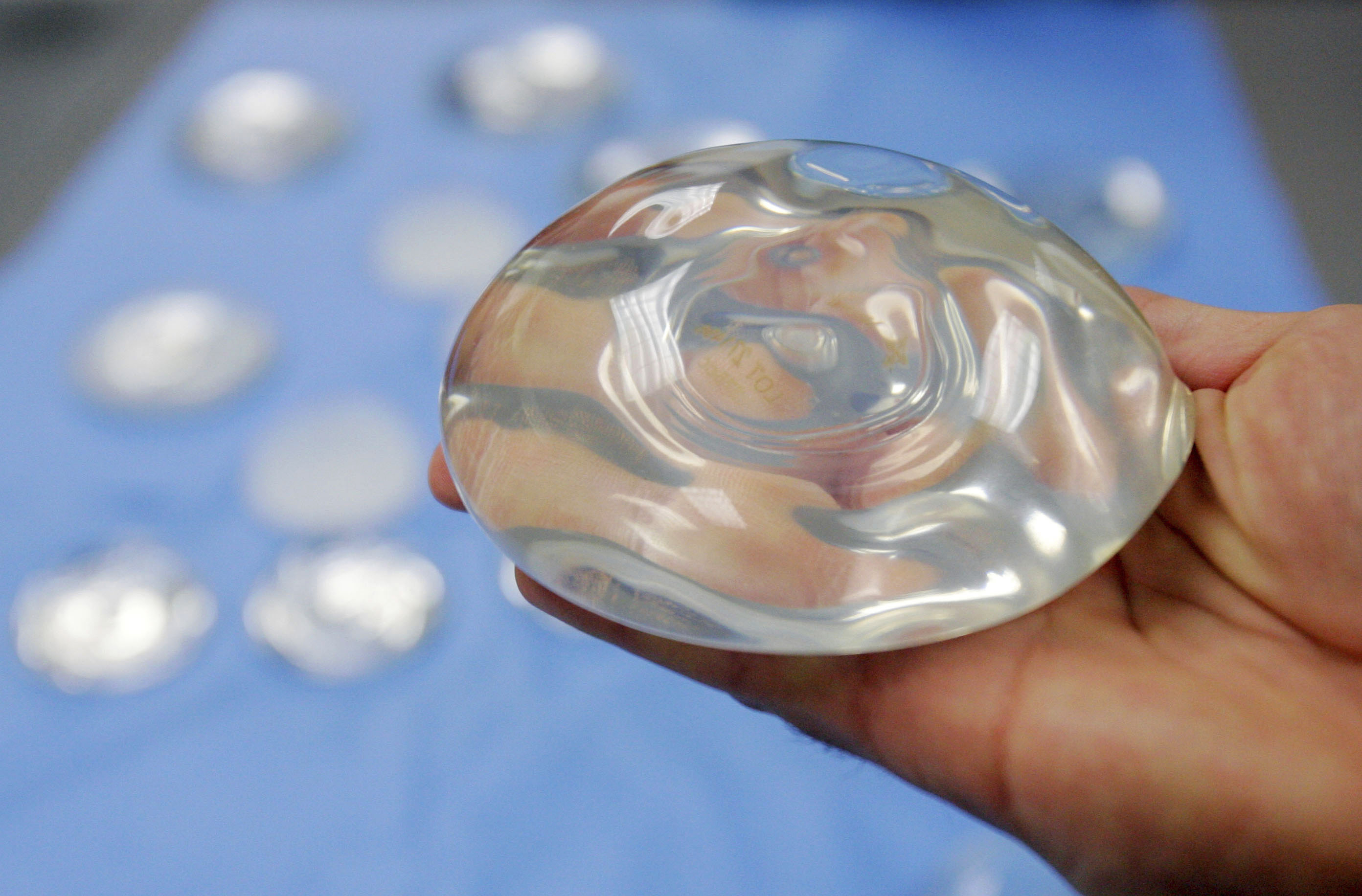 This Dec. 11, 2006 file photo shows a silicone gel breast implant at a manufacturing facility in Irving, Texas. On Friday, Sept. 14, 2018, U.S. health officials said they will convene a public meeting of medical advisers in 2019 on the safety of breast implants because of growing science on the topic, including an independent analysis that suggests certain rare health problems might be more common in women with implants containing silicone gel. (AP Photo/Donna McWilliam, File)

But the agency decided there was not enough evidence to tie silicone implants to other problems such as immune system and connective tissue disorders, so it approved devices from two makers — Allergan and Mentor Corp. — in 2006. FDA required the companies to do more studies on how women fared, and the Texas researchers used these reports in an FDA database for their analysis.

Compared to women without implants, those with silicone implants seemed to have greater rates of an immune system disorder called Sjogren syndrome, a connective tissue disorder called scleroderma, and the skin cancer melanoma, although cases of these were rare, the researchers reported. But rates for other problems such as fibromyalgia were lower among implant users. Reproductive problems such as birth defects and stillbirths were mixed and inconsistent.

Furthermore, a higher rate of rheumatoid arthritis was tied to one brand but a lower rate for another. The difference gets to what critics called a fundamental flaw in the data used for the analysis: One implant maker required proof of diagnosis by a doctor rather than just a patient reporting a problem to include it in the database; the other did not.

Another study weakness is that more than half of women dropped out of touch within two years of their operations.

Because of these and other shortcomings, “we respectfully disagree” with the researchers’ conclusions and urge that they be viewed with caution, Dr. Binita Ashar of the FDA’s Center for Devices and Radiological Health said in a statement .

“This study is messy” and has the potential to create more anxiety than insight, said Dr. Andrea Pusic, plastic surgery chief at Brigham and Women’s Hospital in Boston and president-elect of the Plastic Surgery Foundation, which supports research and advocacy by the American Society of Plastic Surgeons.

The group gets industry grants for some of its work, and Pusic gets royalties from a questionnaire used in many studies including this one.

Dr. Charles Thorne, plastic surgery chairman at Lenox Hill Hospital in New York and president elect of the American Society of Aesthetic Plastic Surgery, said the inconsistency in some of the results “is a little hard to explain” since the devices are similar chemically.

But the study is a worthy effort, he said.

“We have to constantly reevaluate the data and make sure things are safe,” Thorne said. “The best evidence we have now indicates there’s no increased likelihood of these systemic diseases.”