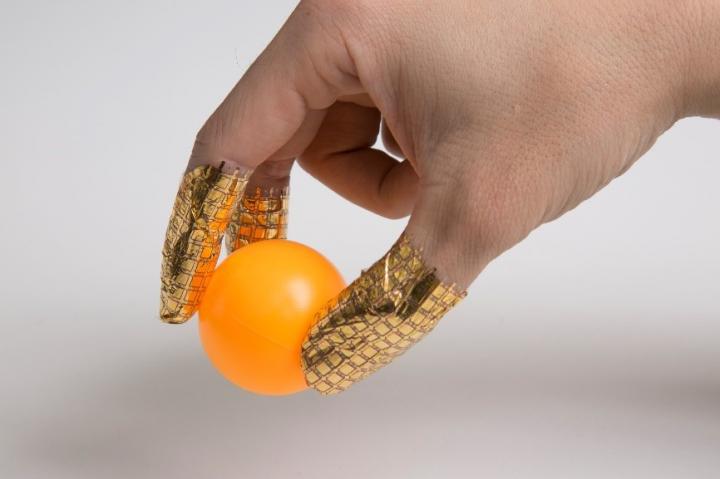 The pressure sensors wrap around and conform to the shape of the fingers while still accurately measuring pressure distribution. (Credit: 2016 Someya Laboratory)

Healthcare practitioners may one day be able to physically screen for breast cancer using pressure-sensitive rubber gloves to detect tumors, owing to a transparent, bendable and sensitive pressure sensor newly developed by Japanese and American teams.

Conventional pressure sensors are flexible enough to fit to soft surfaces such as human skin, but they cannot measure pressure changes accurately once they are twisted or wrinkled, making them unsuitable for use on complex and moving surfaces. Additionally, it is difficult to reduce them below 100 micrometers thickness because of limitations in current production methods.

To address these issues, an international team of researchers led by Dr. Sungwon Lee and Professor Takao Someya of the University of Tokyo’s Graduate School of Engineering has developed a nanofiber-type pressure sensor that can measure pressure distribution of rounded surfaces such as an inflated balloon and maintain its sensing accuracy even when bent over a radius of 80 micrometers, equivalent to just twice the width of a human hair. The sensor is roughly 8 micrometers thick and can measure the pressure in 144 locations at once. 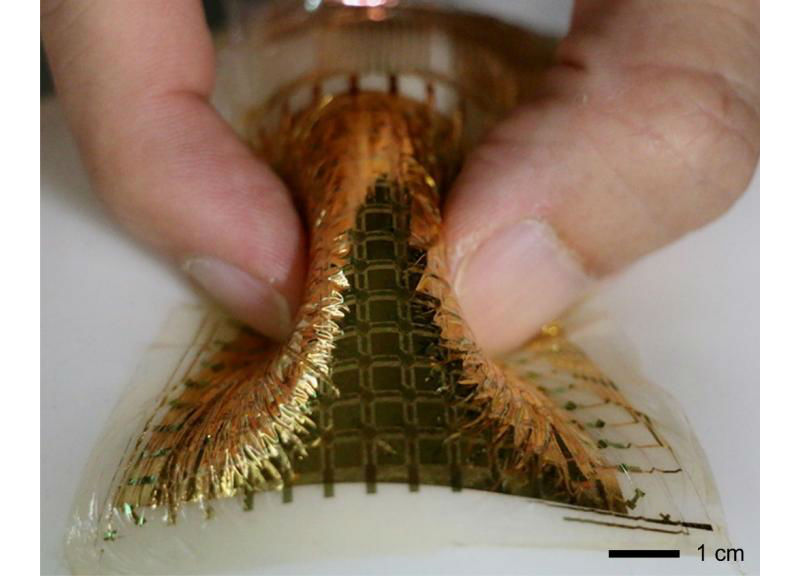 The flexible pressure sensor conforms to the shape of an inflated balloon. Even when the sensor is stretched and deformed with the shape of the balloon, the device still measures the pressure distribution accurately. (Credit: 2016 Someya Laboratory)

The device demonstrated in this study consists of organic transistors, electronic switches made from carbon and oxygen based organic materials, and a pressure sensitive nanofiber structure. Carbon nanotubes and graphene were added to an elastic polymer to create nanofibers with a diameter of 300 to 700 nanometers, which were then entangled with each other to form a transparent, thin and light porous structure.

“We’ve also tested the performance of our pressure sensor with an artificial blood vessel and found that it could detect small pressure changes and speed of pressure propagation,” says Lee. He continues, “Flexible electronics have great potential for implantable and wearable devices. I realized that many groups are developing flexible sensors that can measure pressure but none of them are suitable for measuring real objects since they are sensitive to distortion. That was my main motivation and I think we have proposed an effective solution to this problem.”