Biomedical engineers have recently developed a smartphone app that non-invasively helps detect anemia. Now, instead of having to get a blood test at the doctor’s office, the smartphone app uses photos of a person’s fingernails to measure how much hemoglobin is in their blood.

“All other ‘point-of-care’ anemia detection tools require external equipment, and represent trade-offs between invasiveness, cost, and accuracy,” says principal investigator Wilbur Lam, MD, Ph.D. “This is a standalone app whose accuracy is on par with currently available point-of-care tests without the need to draw blood.”

This project is extended from the Ph.D. work of former biomedical engineering graduate student Rob Mannino, Ph.D., who was inspired from his own experience of living with beta-thalassemia, an inherited blood disorder caused by a mutation in the beta-globin gene.

“Treatment for my disease requires monthly blood transfusions,” says Mannino. “My doctors would test my hemoglobin levels more if they could, but it’s a hassle for me to get to the hospital in between transfusions to receive this blood test. Instead, my doctors currently have to just estimate when I’m going to need a transfusion, based on my hemoglobin level trends.”

“This whole project couldn’t have been done by anyone but Rob,” says Lam. “He took pictures of himself before and after transfusions as his hemoglobin levels were changing, which enabled him to constantly refine and tweak his technology on himself in a very efficient manner. So essentially, he was his own perfect initial test subject with each iteration of the app.”

Mannino and Lam hope this app enables self-management by patients who suffer with chronic anemia. This would allow users to monitor their own disease, and have a better understanding of when they should receive transfusions and if they need to adjust their current therapy sessions, ultimately, reducing complications of having transfusions too early or too late.

The researchers want the app to be used as a tool for screening, but not as a predictive clinical diagnosis. Because this tool is available on a smartphone, anyone can use it at any time, but they believe it will be especially useful for pregnant women, women with abnormal menstrual bleeding, or athletes. Overall, anemia affects two billion people worldwide, and has symptoms such as fatigue, paleness, and cardiac distress if untreated. Currently, the standard for anemia diagnosis uses what’s known as complete blood count (CBC).

To create their current app, Mannino and Lam studied fingernail photos and then compared the color of the fingernail beds with hemoglobin levels measured by CBC in 337 people. The individuals ranged from healthy to those with a variety of anemia diagnoses. The researchers used an algorithm that was developed from 237 of the test subjects, and converted fingernail color to blood hemoglobin level, which was then tested on the rest of the 100 individuals. 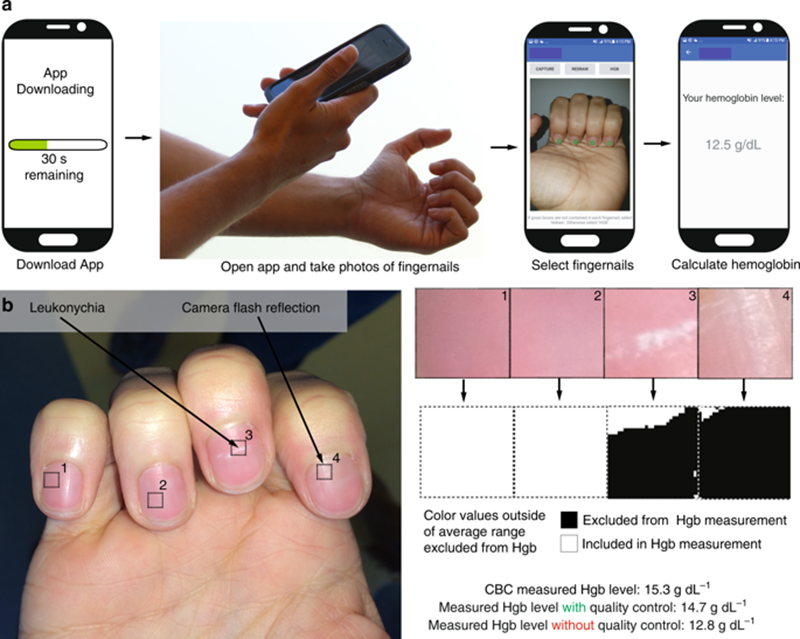 From this, the researchers were able to use a single smartphone image, without personalized calibration, to measure hemoglobin level with the accuracy of 2.4 grams/deciliter with sensitivity of up to 97 percent. When they personalized the calibration and tested it on four patients over several weeks, the results improved the accuracy to .92 grams/ deciliter, which is a degree of accuracy that correlates with point-of-care blood-based hemoglobin tests. Normal values are usually around 13.5-17.5 grams/deciliter for males and 12.0-15.5 grams/deciliter for females.

The app uses fingernail beds, which do not have melanin, and means the test is valid for individuals with different skin tones. Additionally, the app uses image metadata to correct background brightness and can be adapted with a variety of different phones.

Currently, Mannino and Lam are working with doctors at Emory and Children’s in order to collect more data and better calibrate the system.

“This is just a snap shot of the accuracy right now,” Lam says. “The algorithm gets smarter with every patient enrolled.”

Mannino and Lam hope their project will be commercially available to the public for download in spring of 2019.