A fire raced through a small South Korean hospital with no sprinkler system on Friday, killing 37 people, many of them elderly, and injuring more than 140 others in the country’s deadliest blaze in about a decade.

Sejong Hospital in the southeastern city of Miryang has a separate nursing ward where 94 elderly patients were being treated, but all of them were safely evacuated, fire officials said.

Most of the victims were on the first and second floors of the hospital’s six-story general ward, where its emergency room and intensive-care unit were located. Officials believe the fire started in the emergency room.

Mirayng police official Kim Han-su said 34 of the dead were women and 26 were in their 80s or older. He said police may be able to announce the cause of the fire on Saturday.

Dark smoke and flames were pouring from the emergency room when firefighters arrived, so they used ladders to enter second-floor windows. Some carried patients on their backs to other rescuers below, who moved them on stretchers to ambulances.

Several fabric escape chutes were hanging from the building’s sixth floor windows after being used to evacuate patients and hospital staff. 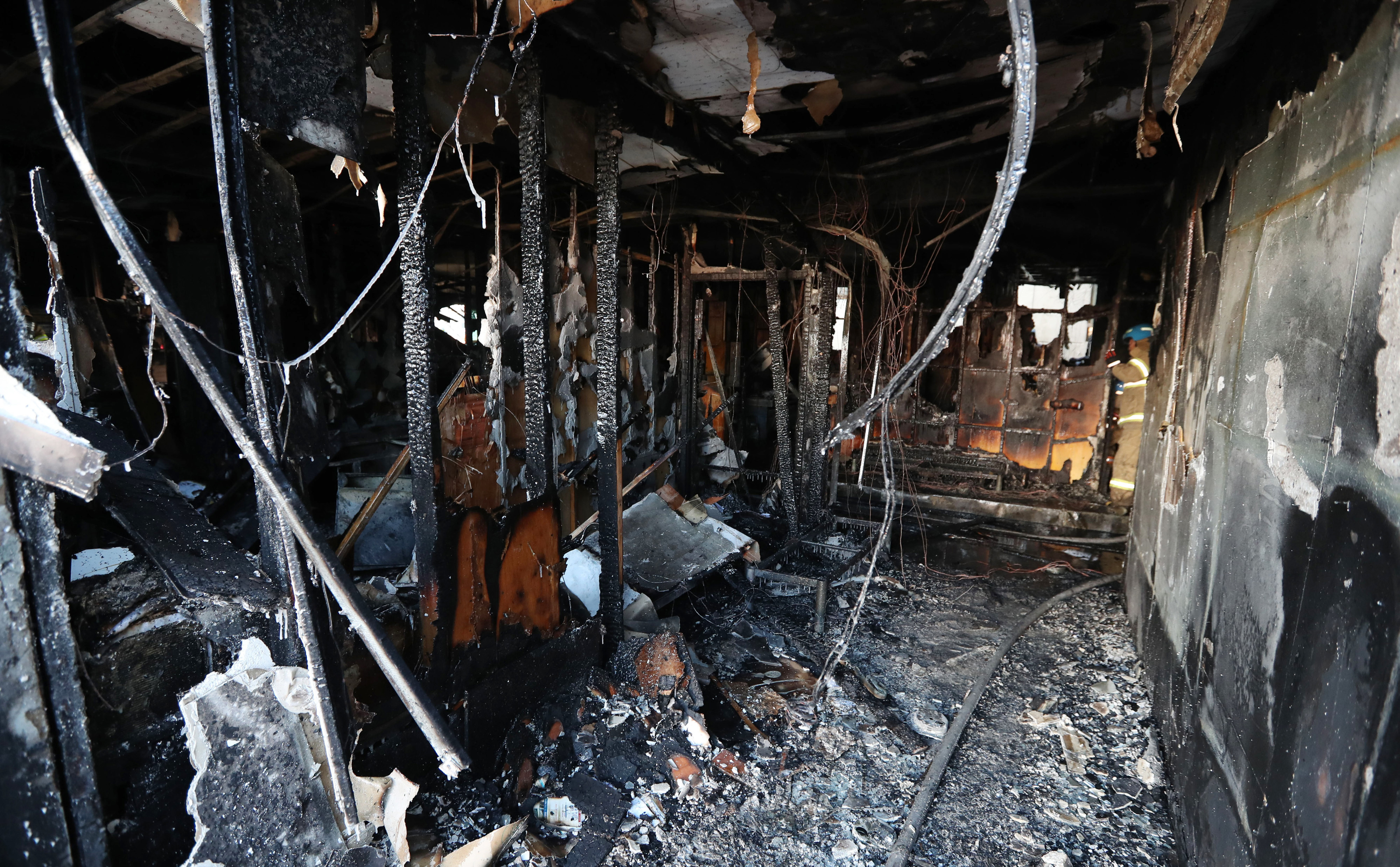 A firefighter inspects a burnt hospital after a fire in Miryang, South Korea, Friday, Jan. 26, 2018. A fire swept through the hospital in southeastern South Korea on Friday, killing more than 30 people and injuring dozens of others in one of the country’s most deadly fire incidents in recent years. (Kim Dong-mi/Yonhap via AP)

Dozens of fire trucks and two helicopters were sent to the hospital as thick smoke blanketed nearby streets. The blaze was extinguished in about three hours.

Three of the dead worked at the hospital — an emergency room doctor and a nurse and nurse assistant on the second floor — said Son Kyung-cheol, head of the foundation that operates the facility. The National Fire Agency said officials were trying to identify other victims.

Most of the deaths appeared to be due to suffocation, with only one victim suffering burns, a National Fire Agency official said on condition of anonymity because he wasn’t authorized to speak to the media.

Authorities said 143 people were injured, including seven who were in serious condition.

Fire official Choi Man-wu said authorities were investigating whether the hospital had missed any mandatory safety inspections, although Son said it had not.

If safety issues were involved in the fire, hospital and local authorities are likely to receive harsh public criticism. In 2014, South Korea grappled with the aftermath of a ferry sinking that killed more than 300 people and exposed serious shortcomings in public safety. Officials blamed crew members’ negligence, overloaded cargo, improper storage, unprofessional rescue work and corruption by the ship’s owners.

President Moon Jae-in held an emergency meeting with senior advisers and ordered officials to provide necessary medical treatment to those rescued, find the exact cause of the fire and work out measures to prevent future fires, spokesman Park Su-hyun said.

South Korea is one of the fastest-aging countries in the world and has many nursing hospitals, which are preferred for elderly people who need long-term doctors’ care.

In 2014, a fire set by an 81-year-old dementia patient killed 21 people at a hospital for the elderly.

In other recent fires, 29 people were killed in late December in a building in central South Korea, which was the country’s deadliest blaze in the past decade before the hospital fire. Last weekend, a fire at a Seoul motel killed six people. Police arrested a man suspected of setting it in anger because he had been denied a room for being heavily drunk.