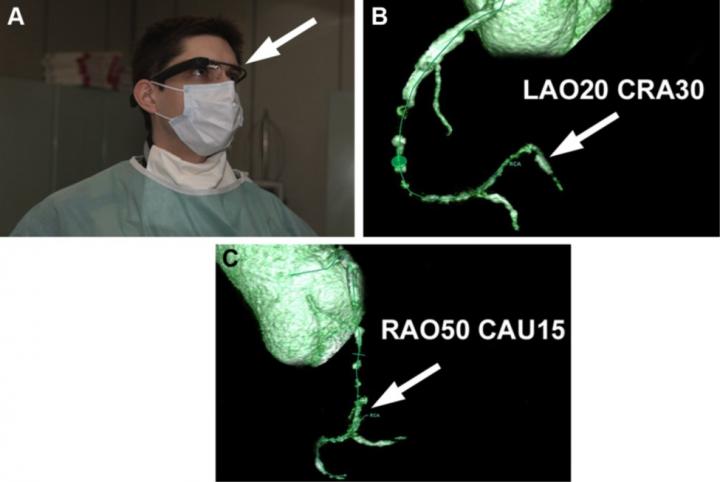 Virtual reality (VR) has potential to revolutionize some aspects of medicine and healthcare. Several medical specialties are already using it to train physicians and assist diagnosis and it also has potential for treatment. A group of cardiologists has now successfully used a VR device to guide the opening up (revascularization) of a chronically blocked right coronary artery. Their report is published in the Canadian Journal of Cardiology.

Chronic total occlusion, a complete blockage of the coronary artery, sometimes referred to as the “final frontier in interventional cardiology,” represents a major challenge for catheter-based percutaneous coronary intervention (PCI). This sentiment is driven by the unpredictable procedural success rates related to the difficulty of recanalizing chronic total occlusions with percutaneous techniques as well as incomplete visualization of the occluded coronary arteries by conventional coronary angiography radiology methods.

Consequently, there is substantial interest in using novel imaging methods for preprocedural characterization of chronic total occlusion. Coronary computed tomography angiography (CTA) is increasingly used to provide physicians with guidance when performing PCI in this subset of lesions. The occluded coronary segment and the distal vessel territory are often more clearly depicted using coronary CTA than in invasive angiography. Of particular interest, the procedure itself can be facilitated by projection of three-dimensional CTA data sets on separate monitors in the catheterization laboratory, but this technique is constrained by economic and technical factors.

Cardiologists from the Institute of Cardiology, Warsaw, Poland were able to successfully restore blood flow in the occluded right coronary artery of a 49-year-old male patient assisted by CTA projections in a wearable VR device based on Google Glass, with an optical head-mounted display. The display of three-dimensional computed tomographic reconstructions in a mobile application equipped with a hands-free voice recognition system and a zoom function, developed specifically for this purpose by a team of physicists from the Interdisciplinary Centre for Mathematical and Computational Modelling of the University of Warsaw, enabled the physician-operators to clearly visualize the distal coronary vessel and verify the direction of the guide wire advancement relative to the course of the blocked vessel segment. The procedure was completed successfully with implantation of two drug-eluting stents.

“This case demonstrates the novel application of wearable devices for display of CTA data sets in the catheterization laboratory that can be used for better planning and guidance of interventional procedures, and provides proof of concept that wearable devices can improve operator comfort and procedure efficiency in interventional cardiology,” explained lead investigator Maksymilian P. Opolski, MD, PhD, of the Department of Interventional Cardiology and Angiology at the Institute of Cardiology, Warsaw, Poland.

The device used, Google Glass, consists of a wearable, hands-free computer with an optical head-mounted display worn by interventional cardiologists in the catheterization laboratory. The optical head-mounted display can display and capture images and videos while interacting with the surrounding environment. This display is an example of the concept of VR in which the user is supplemented with additional information generated by the device.

“Mobile technology is easily accessible and offers an incremental opportunity to expand the existing open platform for mobile applications, which might in turn overcome the economic and capacity limitations of advanced angiography systems with dedicated monitors for projection of CTA data sets,” added Dr. Opolski. “Furthermore, wearable devices might be potentially equipped with filter lenses that provide protection against X-radiation. We believe wearable computers have a great potential to optimize percutaneous revascularization, and thus favorably affect interventional cardiologists in their daily clinical activities.”