Researchers at the University of Pennsylvania have developed the first placenta-on-a-chip that can fully model the transport of nutrients across the placental barrier.

The flash-drive-sized device contains two layers of human cells that model the interface between mother and fetus. Microfluidic channels on either side of those layers allow researchers to study how molecules are transported through, or are blocked by, that interface.

Like other organs-on-chips, such as ones developed to simulate lungs, intestines and eyes, the placenta-on-a-chip provides a capability to mimic and study the function of that human organ in ways that have not been possible using traditional tools.

Research on the team’s placenta-on-a-chip is part of a nationwide effort sponsored by the March of Dimes to identify causes of preterm birth and ways to prevent it. Prematurely born babies may experience lifelong, debilitating consequences, but the underlying mechanisms of this condition are not well understood due in part to the difficulties of experimenting with intact, living human placentae.

The study was published in the journal Lab on a Chip.

The researchers’ placenta-on-a-chip is a clear silicone device with two parallel microfluidic channels separated by a porous membrane. On one side of those pores, trophoblast cells, which are found at the placental interface with maternal blood, are grown. On the other side are endothelial cells, found on the interior of fetal blood vessels. The layers of those two cell types mimic the placental barrier, the gatekeeper between the maternal and fetal circulatory systems.

“That barrier mediates all transport between mother and fetus during pregnancy,” Blundell said. “Nutrients, but also foreign agents like viruses, need to be either transported by that barrier or stopped.” 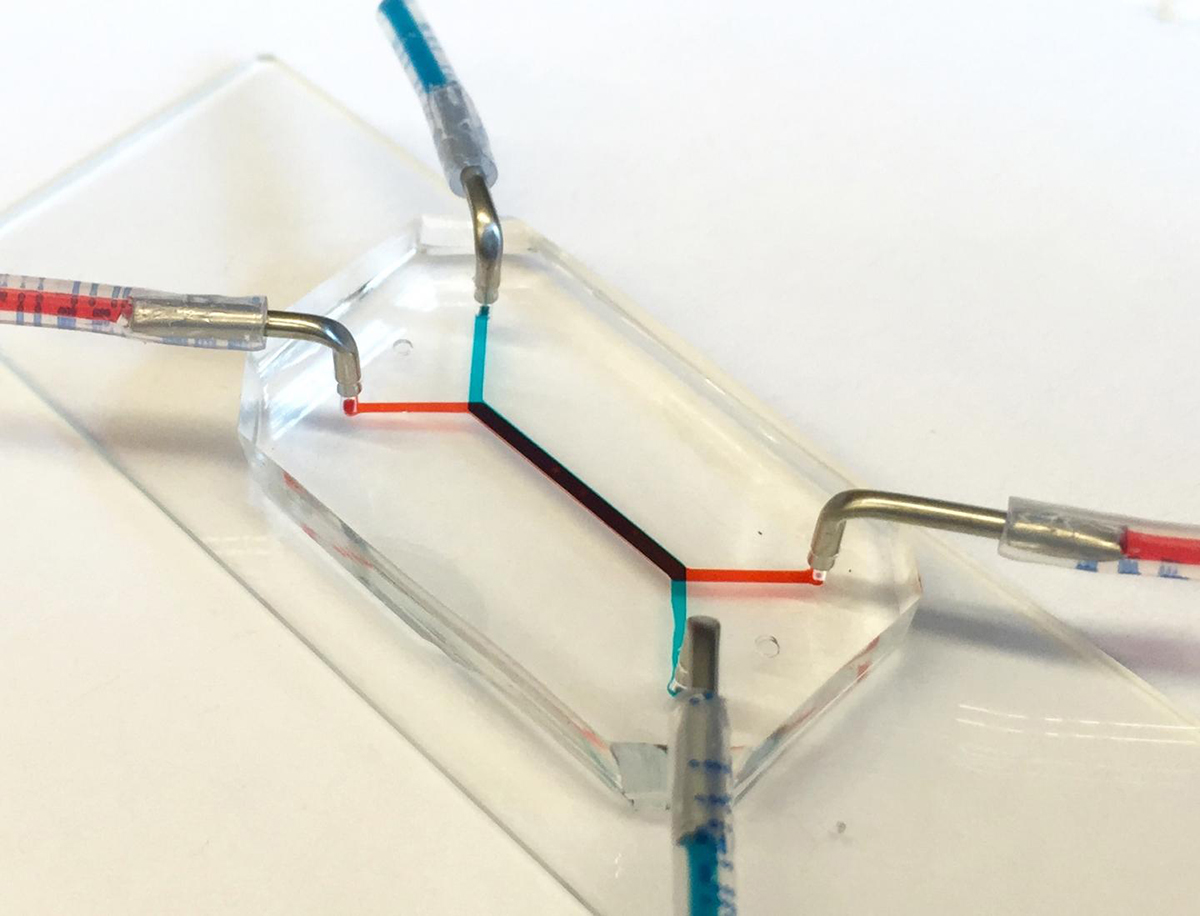 he flash-drive-sized device contains two layers of human cells that model the interface between mother and fetus. Microfluidic channels on either side of those layers allow researchers to study how molecules are transported through, or are blocked by, that interface. (Credit: University of Pennsylvania)

In 2013, Huh and his collaborators at Seoul National University conducted a preliminary study to create a microfluidic device for culturing trophoblast cells and fetal endothelial cells. This model, however, lacked the ability to form physiological placental tissue and accurately simulate transport function of the placental barrier.

In their new study, the Penn researchers have demonstrated that the two layers of cells continue to grow and develop while inside the chip, undergoing a process known as “syncytialization.”

“The placental cells change over the course of pregnancy,” Huh said. “During pregnancy, the placental trophoblast cells actually fuse with one another to form an interesting tissue called syncytium. The barrier also becomes thinner as the pregnancy progresses, and with our new model we’re able to reproduce this change.”

The Penn team validated the new model by showing glucose transfer rates across this syncytialized barrier matched those measured in perfusion studies of donated human placentae.

While useful in providing this type of baseline, donated placental tissue can be problematic for doing many of the types of studies necessary for fully understanding the structure and function of the placenta, especially as it pertains to diseases and disorders.

“The placenta is arguably the least understood organ in the human body,” Huh said. “Much remains to be learned about how transport between mother and fetus works at the tissue, cellular and molecular levels. An isolated whole organ is a not ideal platform for these types of mechanistic studies.”

As part of a $10 million grant from the March of Dimes that established the Center, Parry and his colleagues research metabolic changes that may be associated with preterm birth using in vitro placental cell lines and ex vivo placental tissue. The grant also supported their work with the Huh lab to develop new tools that could model preterm birth-associated placental dysfunction and inform such research efforts.

“Eventually,” Huh said, “we hope to leverage the unique capabilities of our model to demonstrate the potential of organ-on-a-chip technology as a new strategy to innovate basic and translational research in reproductive biology and medicine.”

While the placenta-on-a-chip is still in the early stages of testing, researchers at Penn and beyond are already planning to use it in studies on preterm birth.