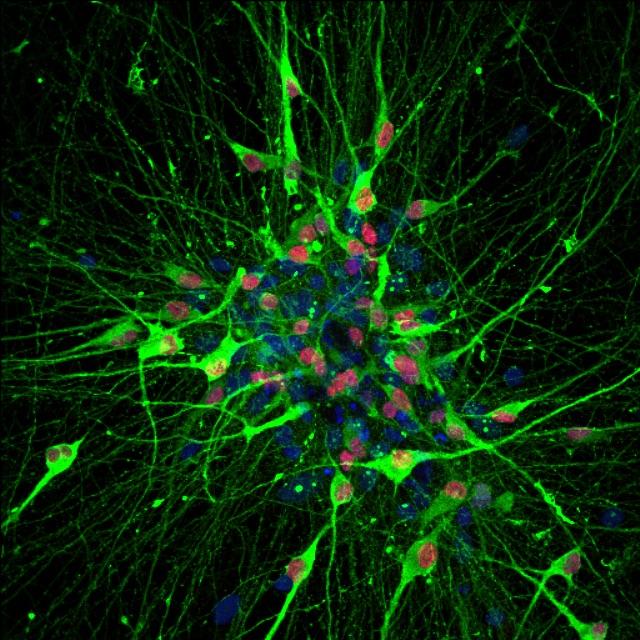 Human serotonin-producing neurons, generated from induced pluripotent stem cells, created in the lab of Su-Chun Zhang in the Waisman Center at the University of Wisconsin-Madison. Blue indicates cell nuclei, red and green show typical markers for these neurons, which produce a neurotransmitter that affects large parts of the brain. (Credit: Jianfeng Lu and Su-Chun Zhang, University of Wisconsin-Madison)

Su-Chun Zhang, a pioneer in developing neurons from stem cells at the University of Wisconsin-Madison, has created a specialized nerve cell that makes serotonin, a signaling chemical with a broad role in the brain.

“Serotonin essentially modulates every aspect of brain function, including movement,” Zhang says. The transmitter is made by a small number of neurons localized on one structure at the back of the brain. Serotonin exerts its influence because the neurons that make it project to almost every part of the brain.

The study, reported today in the journal Nature Biotechnology, began with two types of stem cells: one derived from embryos, the other from adult cells. Because serotonin neurons form before birth, the researchers had to recreate the chemical environment found in the developing brain in the uterus, Zhang says.

“That sounds reasonably simple, and we have made so many different types of neural cells. Here, we had to instruct the stem cells to develop into one specific fate, using a custom-designed sequence of molecules at exact concentrations. That’s especially difficult if you consider that the conditions needed to make serotonin neurons are scarce, existing in one small location in the brain during development.”

The cells showed the expected response to electrical stimulation and also produced serotonin.

Although other scientists have matured stem cells into something resembling serotonin neurons, the case is much more conclusive this time, says first author Jianfeng Lu, a scientist at UW-Madison’s Waisman Center. “Previously, labs were producing a few percent of serotonin neurons from pluripotent stem cells, and that made it very difficult to study their cells. If you detect 10 neurons, and only two are serotonin neurons, it’s impossible to detect serotonin release; that was the stone in the road.”

Instead, those neurons were identified based on cellular markers, which is “not sufficient to say those are functional serotonin neurons,” Lu says.

To confirm that the new cells act like serotonin neurons, “we showed that the neurons responded to some FDA-approved drugs that regulate depression and anxiety through the serotonin pathway,” Zhang says.

While the previous attempts “followed what was learned from mouse studies,” the current study used other growth factors, Zhang says. “It was not exactly trial and error; we have some rules to follow, but we had to refine it little by little to work out — one chemical at a time — the concentration and timing, and then check and recheck the results. That’s why it took time.”

Although cells derived from stem cells are commonly used to test drug toxicity, Zhang is aiming higher with the serotonin neurons. “We think these can help develop new, more effective drugs, especially related to the higher neural functions that are so difficult to model in mice and rats,” he says. “Particularly because they are from humans, these cells may lead to benefits for patients with depression, bipolar disorder or anxiety. These are some of the most troublesome psychiatric conditions, and we really don’t have great drugs for them now.”

Because the neurons can be generated from induced pluripotent stem cells, which can be produced from a patient’s skin cells, “these could be useful for finding treatments for psychiatric disorders like depression, where we often see quite variable responses to drugs,” says Lu. “By identifying individual differences, this could be a step toward personalized medicine.

“I’m like Su-Chun. I don’t want to just make a publication in a scientific journal. I want our work to affect human health, to improve the human condition.”