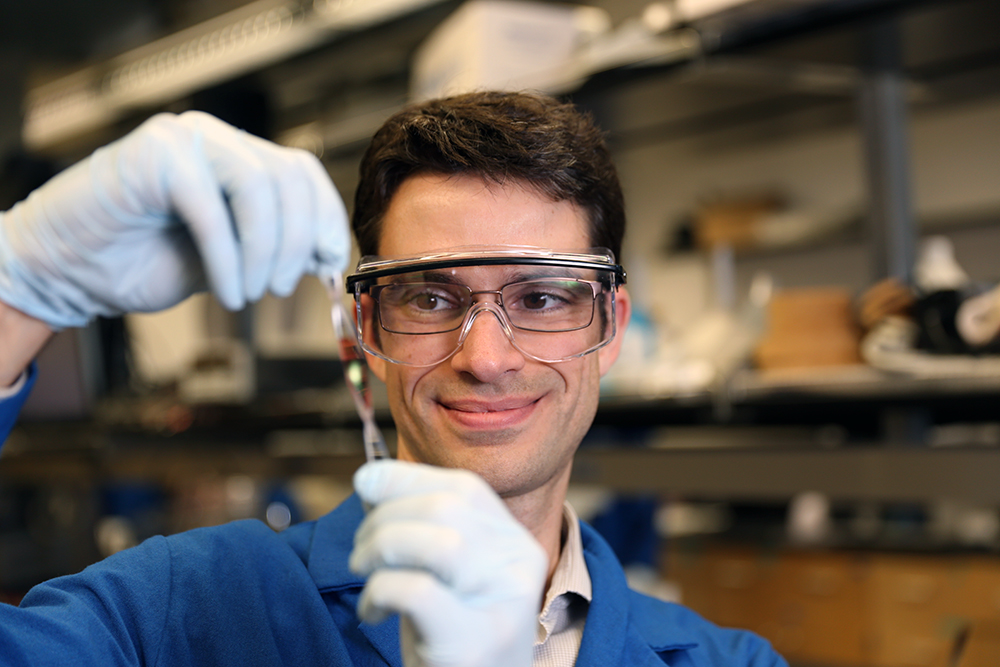 Whether it’s a pedometer dangling from a belt loop or a skin patch to monitor heart rate and hydration levels, wearable and mobile devices have become essential gear for many of today’s fitness minded. But Darren Lipomi, a nanoengineer at the University of California, San Diego, envisions even more impressive things to come for optimizing workouts and bringing greater precision to health care. Lipomi is helping to build a future of “stretchable electronics,” semiconducting devices that will more seamlessly integrate with the contours of our bodies, outside and even inside, to monitor vital signs, muscle activity, metabolic changes, and organ function—to name just a few possibilities.

Lipomi and his colleagues specifically want to create a new class of semiconducting polymer that has the mechanical properties of human skin. This transparent “electronic skin” will have a soft elasticity to conform to shape, sense contact, absorb blunt force, and even self heal when dinged. It will do all of this—and possibly more—while continuously and wirelessly performing its programmed health-monitoring function. To help Lipomi build this future of real-time health monitoring, he has been awarded a 2015 NIH Director’s New Innovator Award. This NIH award supports exceptionally creative new investigators who propose highly innovative projects with the potential for unusually high impact.

Like a lot of kids raised in in the 1980s and early 1990s, Lipomi grew up watching heavy doses of the television series “Star Trek: The Next Generation.” The character Data, an android with electronic skin, particularly intrigued him and helped to spawn his fascination with science and engineering.

After earning an undergraduate degree in chemistry, Lipomi attended Harvard University, Cambridge, MA, as a graduate student and began producing miniature chemical and biological sensors. Lipomi planned to continue along this track when he headed to California for a post-doctoral fellowship at Stanford University, Palo Alto. That’s where he was introduced to the emerging field of stretchable electronics, which involves developing mobile technologies made from extremely elastic materials. For a kid who grew up on Star Trek, it was the perfect challenge.

Lipomi’s search for stretchable materials starts with the molecular structure. He and his team rely on computational tools and frequent meetings around the whiteboard to tweak the most promising chemical components. Once a stretchable and electrically conductive structure has been designed, they must hammer away to fold in functional elements, such as the ability to sense pressure, interact with a particular biochemical, self heal, and biodegrade.

As daunting as this might sound, the lab already is well on its way to producing a material that appears to have many of the features he’s looking for to serve as electronic skin. Intriguingly, the main component of their material is derived from furan, a conductive, organic compound distilled from pine wood. Once they’ve finalized and thoroughly tested this material, the next step will be to incorporate it into skin-like pressure sensors for possible prosthetic limbs, biochemical sensors for wearable health monitors, and photodetectors for artificial retinas. They also plan to develop an implantable pressure sensor for continuous monitoring of intracranial pressure.

An important goal of the Precision Medicine Initiative Cohort Program is to take advantage of advances in mobile technology to better evaluate health and treatment outcomes. Just think what will become possible in Lipomi’s view of the future, in which stretchable, organic bioelectronics will not only provide real-time monitoring of our health and vital signs but also restore vital bodily functions. Sophisticated, wearable, and implantable devices might also detect and immediately treat disease. Now that’s a world I’d love to see, and not just on TV.