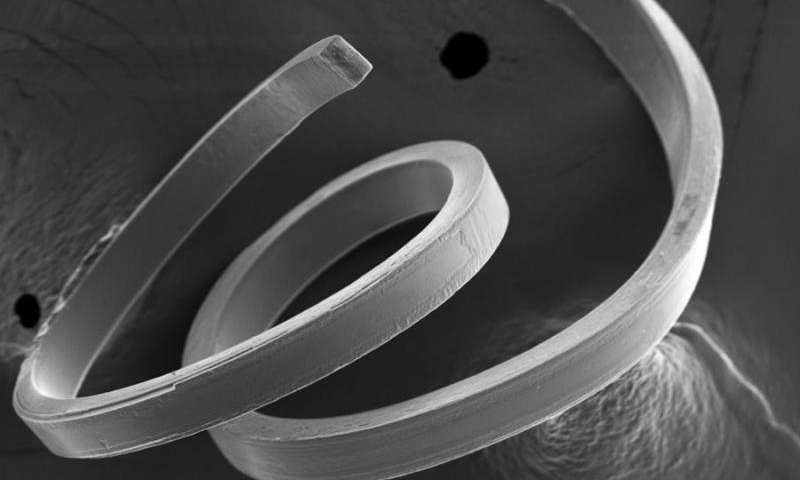 Until recently, “flexible ferroelectrics” could have been thought of as the same type of oxymoronic phrase. However, thanks to a new discovery by the U.S. Department of Energy’s (DOE) Argonne National Laboratory in collaboration with researchers at Northwestern University, scientists have pioneered a new class of materials with advanced functionalities that moves the idea from the realm of irony into reality.

Ferroelectrics are a useful type of material that is found in capacitors that are used in sensors, as well as computer memory and RFID cards. Their special properties originate from the fact that they contain charged regions polarized in a specific orientation, which can be controlled with an external electric field. But they’ve also had a big drawback as engineers try to use them in new inventions.

“Ferroelectric materials are known for being quite brittle, and so it has always been a big challenge to make them mechanically flexible,” says Argonne nanoscientist Seungbum Hong, who helped to lead the research. “Because ferroelectricity and this kind of flexibility are relatively rare properties to see on their own, to have both ferroelectricity and flexibility in this new material is basically unprecedented.”

Previous generations of ferroelectric materials were primarily ceramic, Hong says, which made them fairly brittle. In the new material, the crystal planes at the atomic level tend to slip past one another, adding to the material’s ductility.

With flexible ferroelectrics, scientists and engineers may have the opportunity to adapt these materials for a host of new and improved uses, including precision actuators for atomic force microscopy, ultrasonic imaging sensors and emitters for medical applications and even sensors for some automotive applications.

For data storage, the impact may be even greater. “There’s a very large information density potential with ferroelectric storage,” Hong says. “This could make a big difference as we think about future generations of the data cloud.”

An article based on the research, “Flexible ferroelectric organic crystals,” was published online in Nature Communications in October. One of the lead Northwestern authors of the study, Sir Fraser Stoddart, received the 2016 Nobel Prize in Chemistry for his work on molecular machines.