This is a fabricated wireless power transmission device with a flexible antenna and a CMOS rectifier chip (97% of the flexible device area is composed of a flexible film of thickness 10 μm). (All images credit: Toyohashi University)

Human and animal movements generate slight neural signals from their brain cells. These signals obtained using a neural interface are essential for realizing brain-machine interfaces (BMI). Such neural recording systems using wires to connect the implanted device to an external device can cause infections through the opening in the skull. One method of solving this issue is to develop a wireless neural interface that is fully implantable on the brain.

However, the neural interface implanted on the brain surface should be of small size and minimally invasive. Furthermore, it requires the integration of a power source, antenna for wireless communication, and many functional circuits.

This is a picture of a proposed architecture of the implantable device composed of flexible antenna and CMOS circuits for wireless-powered neural interface systems.

Now, a research team at the Department of Electrical and Electronic Information Engineering at Toyohashi University of Technology has developed a wafer-level packaging technique to integrate a silicon large-scale integration (LSI) chip in a very thin film of a thickness 10 μm. The approach is realized using flip-chip bonding. The researchers have fabricated a wireless power transmission (WPT) device including a flexible antenna and rectifier chip by using the proposed method.

The first author PhD candidate Kenji Okabe said, “We have investigated how to integrate flexible antenna and high-performance circuits and tried this fabrication method with process conditions obtained through experiments.” Assistant Professor Ippei Akita, who is leading the project, said, “Using flexible device technology is a good solution to implement bio-compatible passive devices such as antennas or sensor electrodes. On the other hand, silicon-based integrated circuit technology, which has long history, is suitable for ultra-low-power systems with many functionalities. So, we believe that combining these technologies is essential to establish such minimum invasive implantable devices.” 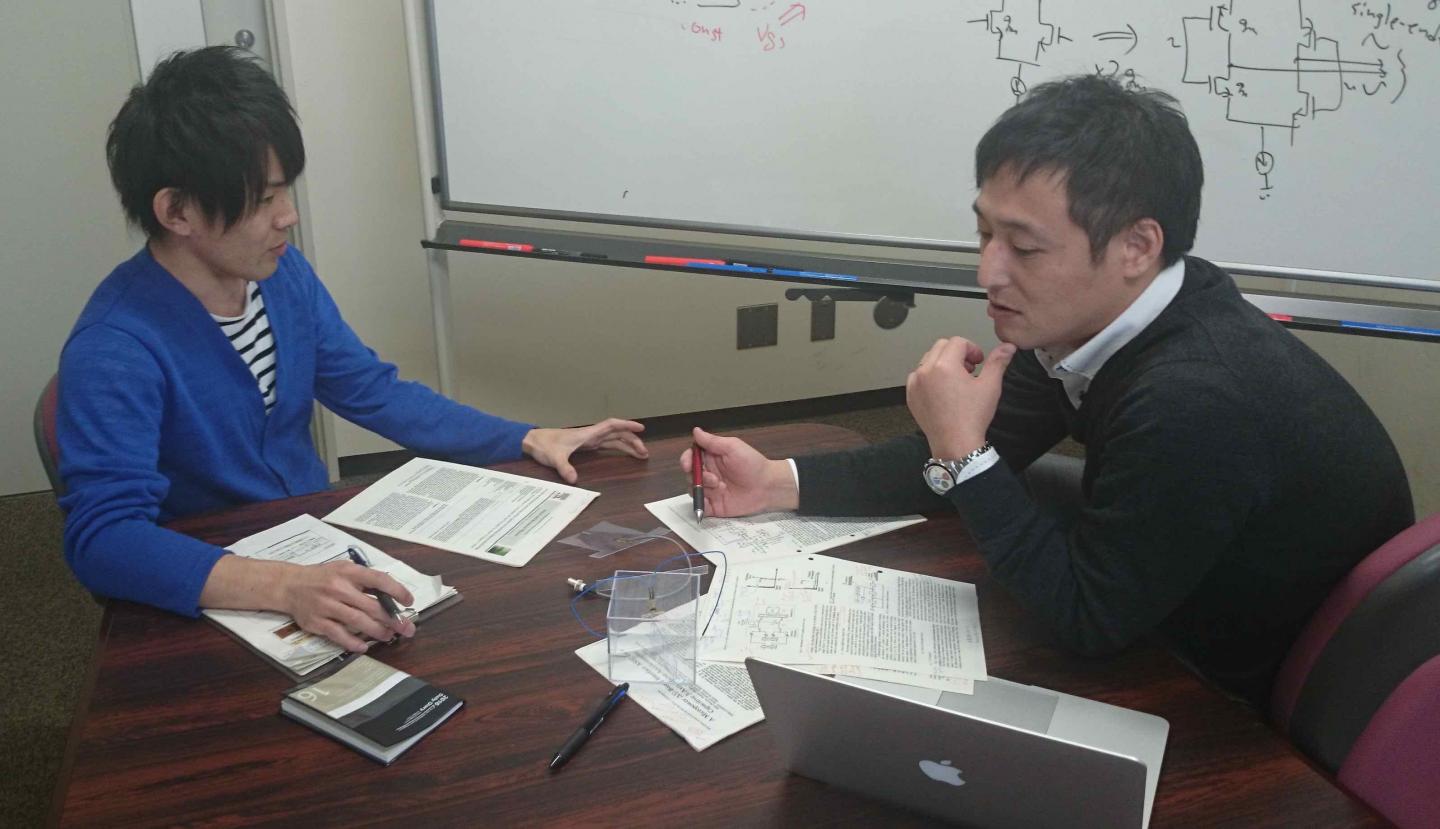 This is a picture of PhD candidate Kenji Okabe (Left) and Assistant Professor Ippei Akita (Right).

The fabricated device is of size 27 mm × 5 mm, and 97% of the device area is composed of a flexible film as the silicon chip has a small area. Therefore, it has sufficient flexibility to fit the shape of the brain surface. In addition, the researchers achieved WPT to the device immersed in saline.

This WPT device can supply electricity to other circuits included in the neural interface. The researchers are trying to integrate more functions (e.g., amplifiers, analog-to-digital converters, signal processors, and radio frequency circuits) to an LSI chip. This study may contribute to the development of safer BMI systems.